Firstly, I just want to say thank you to creator/writer Zeke Pinheiro for allowing me early access to an online screener of the 21 part, Horror Anthology “Fun Size Horror: Volume One”. Over the last few years, we’ve seen more and more directors in the genre venture into short films and collaborate with others in order to get a wider release for their projects. Franchises like “VHS” and “ABC’s Of Death” are the most well-known, but there are others as well, such as “Scary Or Die” and “Trick r’ Treat”. Some are more successful than others, depending often on the budget as well as the actors and actresses being cast. Audiences seem now more than ever, open to the idea of watching horror projects in this kind of medium. The shorts in Fun Size Horror vary in budget and running time, but often even the weaker entries don’t run long enough for you to have time to complain (haha), so that’s a bonus. There are too many directors and actors to rattle off here, so feel free to check the Imdb page for more information. A few of the cast members include Michael May, who not only acts he writes and directs too. A couple of the stand outs for me are the beautiful Allie Gonino, and the always solid Lance Reddick (John Wick and The Guest), both of whom appear in the segment titled “The Collection”.

Let’s start with the cool introductory Halloween themed credits. They were very creative and also reminiscent of several of Tim Burton’s animated films. I was fooled into thinking it was the first of the shorts, and not the title credits (haha). I’ll talk a bit more about the technical aspects that stood out later on in the review. As a rule the acting quality was solid and the audio was very consistent across the 85 minute running time. “When They Say You Are Alone” was the opener. It focused on a woman in her house, who seemed to be experiencing some kind of lucid dreams, where a cult like group of women stood over here while she slept. It was heavy on sound effects and the editing was really neat, an enjoyable somewhat looping short. Immediately following that was one of my favorites, fittingly named “Knock Knock”. I don’t want to spoil any of these, let’s just say if you’re a fan of something like “Insidious” this one will appeal to you. Once again, some great sound effects and an incredibly creepy vibe. The one after didn’t seem to have a name (either that or I missed it), so I’m calling it “The Birthday Party”. What seems like a normal opening of the presents at a kid’s birthday party is anything but, in this disturbing and darkly humorous short. “The Entity” was your typical paranormal experience for a group of three friends. Unfortunately we’ve seen it all before, and although this one was competently made it was rather predictable.”Peresphone” intrigued me and I really enjoyed the twist in the last couple of minutes. It’s what Rodrigo Corte’s “Buried” should have been. Rather than what we got, (which spoiler) was Ryan Reynolds slowly dying in a box for 90 minutes (haha).

Two segments in the middle of the film called “The Lover”, and another unknown that I’m calling “Reality TV”, were probably among the best. The Lover was unbelievably well shot. Smooth panning, wonderful editing and intense music coupled with some of the red stuff and a fitting finale, make this one an absolute gem. Reality TV was about a group of 5 girls in a house, at an undisclosed location, who must choose who of their group will be the next to die. Initially I wasn’t sold on the dynamic of the group, and a few of the actresses fell a bit short, but the sheer brutality of the finale makes it one of the more memorable ones. “Mother” was different. The inclusion of some unique and unorthodox effects at the end make it solid, but I felt like it should have been five minutes longer with a little more explaining. “The Creepy Kid In Apartment B” built some decent suspense early on, but failed to deliver the knock out blow it needed to separate itself from its counterparts. “Mr Hendrix” was written by Zeke himself. It hinted at something eerie but never fully capitalized on it. I was hoping that with the truly disturbing look of Hendrix, which was similar to that of “The Gentlemen” from the Buffy episode “Hush”, he would have written something with more of an impact. “Quad” was the most uniquely shot films of the bunch. We see a trio of friends watching a typical slasher film on cable, while unbeknownst to them they have an intruder in the house. It had some cool, albeit cheesy effects and was shot from four different points of view. A little hard on the eyes at times but good fun none the less. “The Collection” was the last, and aesthetically probably the best. Based on the great shot choices, smooth editing and it’s amazingly jarring sound effects, I’d wager that it had the highest budget of the lot. Reddick’s character Oscar seems controlled but under the surface something is boiling. Gonino brings a natural beauty and ease to her performance that finishes this film off on the highest of notes.

Even the shorts that were lacking substance or felt unneeded, didn’t last long enough to really be a problem. “The Screaming” and the other untitled black and white short, ultimately didn’t achieve whatever the desired effect may have been. Those two could have been cut, along with “Bad Eggs”, which I still give points to for originality, but it didn’t seem to fit the overall theme of this anthology. “The Voice” was quite cliché and failed to offer anything new in the hearing voices, facet of paranormal horror. “Trust” was darkly funny, but the two male leads were so dumb (I know that was the point), but in that case they needed to suffer the most brutal of deaths to warrant this being made. “A Dog And His Boy” was a clever twist on the jealous partner trope (so to speak haha). Unfortunately, it was a little too out there for me, not to mention completely nonsensical. “Paramnesia” appeared to be set in an interesting time period but by the end of its strange, non-linear timeline the purpose of it all lacks some much-needed clarity. One of the worst of the bunch was called “Bitter”. A short which sees two women and a man, arguing over food by using their magical powers against each other. It wasn’t overly witty or funny, and the CG effects were somewhat laughable. The VHS segment (unsure if it had a name), shows an unseen man watching a mad man’s ramblings as he’s interviewed in an interrogation room. It was poor to look at and went nowhere. 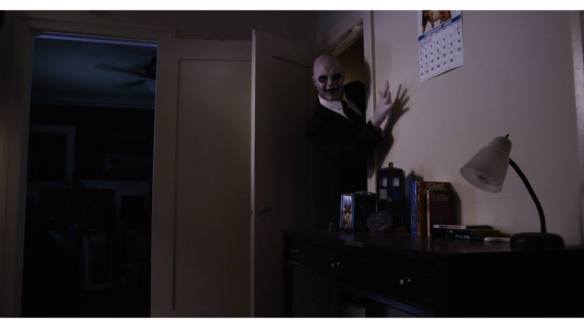 Fun Size Horror: Volume One in my opinion, is very much a welcomed addition to the anthology based Horrors of today. Although I found half a dozen of the shorts a little uneventful, it didn’t dampen the overall entertainment value and enjoyment I got from watching this. All the technical aspects, given it’s such a diverse group of filmmakers with vastly different ideas, was top-notch. “The Lover”, “Reality TV”, “Knock Knock”, “Quad” and “The Collection” are the best of the bunch for mine. Fans of everything and anything horror related must check this one out, it’s well worth your time. Be sure to keep your eye out for Volume two in the near future. Thanks again Zeke, there’s a bunch of great stuff in here! and I can’t wait to see future projects!