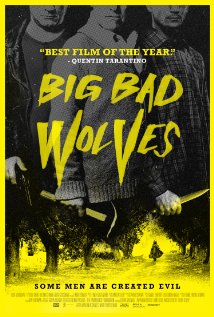 Well guys and girls this is a first for me. It’s a brand new film called “Big Bad Wolves” straight out of Israel and was made by directors Aharon Keshales and Navot Papushado. I’m a huge fan of European cinema and even though Israel is classified as part of the middle east and Africa, there are some great films coming out of places you’d least expect them to. This is the first film I have seen from Israel. It was one of only 7 films to be made in the country in the last year and all its dialogue is in Hebrew/Arabic. 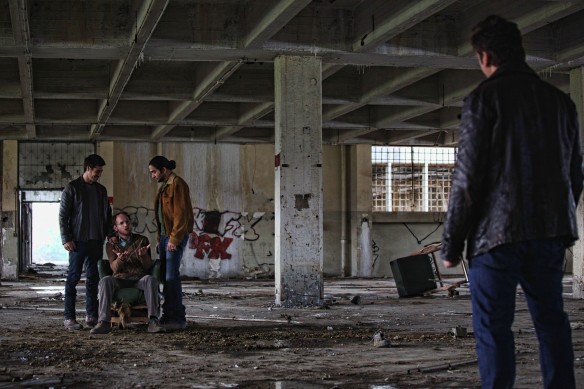 Big Bad Wolves is a dark and disturbing adult fairytale of sorts.. but gone wrong. Micki (a cop with the Israeli police) is caught on camera beating a high school teacher named Dror, whom he believes is responsible for the sexual assault/violent murders of several young girls. The police chief suspends Micki but chooses to ignore any sideline investigation Micki wishes to carry out. Enter Gidi, the father of the most recent young girl to be murdered. Gidi has plans of his own for Dror and will not let anything or anyone get in the way of him carrying out his revenge, the question is do Gidi and Micki have the right man??

The first thing I noticed with the film was the comparisons between some of the faces we see in Hollywood and our three main characters here. Micki played by Lior Ashkenazi is a dead ringer for “No Country For Old Men’s” Javier Bardem. Dror (Rotem Keinan) reminded me very much of Michael Jeter (The Green Mile) who passed away a few years back. Lastly Gidi (Tzahi Grad) was a cross between “Fargo’s” Peter Stormare with a touch of Harrison Ford, very interesting and not something I expected to pick up on.

Anyway, now that I have told you a little about the film and the actors in it let’s hash it out a bit more. Big Bad Wolves has such a wonderful screenplay it’s very well fleshed out and the characters may appear one-dimensional but each of them have select characteristics that make them interesting. The camera work, sound and editing are all flawless. The structure of each act is perfect. The story relies on building tension and a sense of dread throughout the interrogation scenes and once your drawn in you get some relief through some well-timed black comedy. 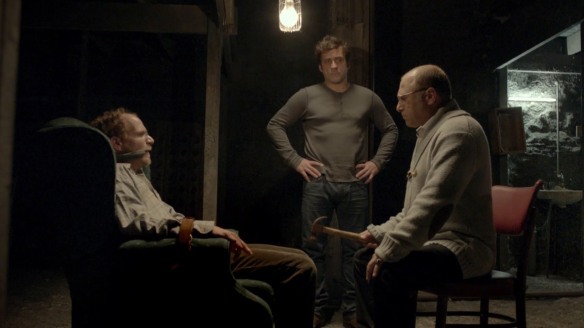 It’s got such a polished look about it for what I think it is a relatively low-budget film. It’s a travesty this hasn’t grossed a lot more money but at the same time I can see why. It’s a revenge story that is mostly made up of a boys club. If you combine that with the fact that its foreign and that is why most people are yet to hear about it. My favourite technical aspect of the film is the score, it’s absolutely brilliant. It reminded me a lot of Luc Besson’s film “The Professional” or “Leon” for those in Europe. The tension is built with a lot of bass and cello but when the atmosphere settles down it has a hint of some of Polanski’s films, I loved it. 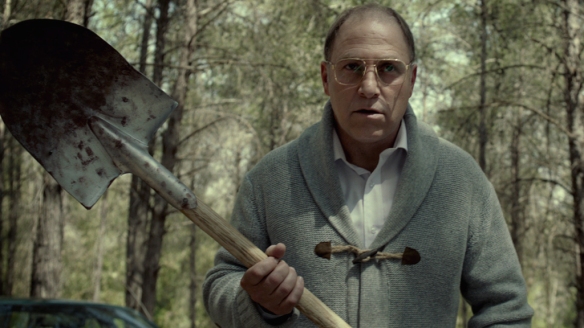 The acting from everyone involved is wonderful too. It’s Tzahi Grad as “Gidi” who steals the show though. He is so calculated and controlled about the information he wants to know and how he is willing to go about getting it. I’m not a parent but I could relate to the feeling of despair you would have over losing a child, especially in such a violent way. I’m sure for the people who are parents there will be no hesitancy jumping on board with Gidi. Rotem and Lior are both very solid as Police officer and Suspect as well. The dialogue is so well written and rolls off the tounge very much like a live play. It’s quick-witted and clever. I loved the direction the film took because even though it is a Crime/Drama film that is marketed from a revenge point of view there remains several other layers in the story and a dynamic amongst the three men that really works. I have to mention the clever twist towards the end of the film, think subtly.

What can be said about Big Bad Wolves that’s bad, other than the Wolves themselves (haha). Only thing I will say is that I think it would be hard for women to enjoy this film because the three central characters are all male and given what the story is about, I’m just not sure. In fact there is only one women that appears for a few minutes in the first act, the rest of the story focuses on the three men. The other small point I’ll make was that I hoped to see a little more emotion from all three characters, specifically Dror and Gidi. For one, Gidi should be outraged with what he believes Dror has done to his daughter. He is in a way, but it was almost to controlled, he never has that breakdown moment and never takes a second to think maybe Dror isn’t the one responsible. Dror proclaims his innocence many times throughout the film yet he is willing to suffer torture at the hands of Gidi without really putting up much of a fight, I suppose that is to maintain the question, Did he do it? or is he innocent? So I kind of get that.. 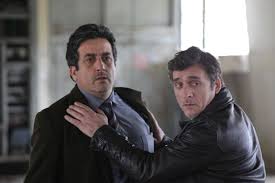 Wow, Big Bad Wolves what a fantastic and professionally made film. I found it to be a mix of Polanski’s film “Death Of A Maiden” and a French film I saw called “7 Days”. It’s a masterclass of acting and story structure, from a technical point of view its flawless. If not for a couple of minor things this would be a perfect film. Quentin Tarantino called this the best film of the year and let me tell you he was not far off the mark. There has been a lot of competition so far this year but Big Bad Wolves deserves to be seen by all! Prisoners has nothing on this film, including a better ending. Get yourself a copy now!!