This is a review for the RickMoe Productions Horror/Slasher film “Teenage Slumber Party Nightmare”, Written and Directed by Richard Mogg (Massage Parlor Of Death) https://adamthemoviegod.com/massage-parlor-of-death-review/. Teenage Slumber Party Nighmare picks up with four young high-schoolers who are about to start spring break. Jamie (played by the lovely Kaitlyn Yurkiw) and her friends, Marlo (Lauren Richardson), Trish (Hillary Kaplan) and Casey (Martha Staus) decide to have a slumber party of which will consist of booze, boys and bullshit…. uh sorry, girl talk. What the girls don’t know is that a deranged stalker wielding a power drill has been following them and intends on putting an end to all the fun. The film also stars Kirk Munaweera, Payton John Bonn and Kevin Paynter. I’ve long been a supporter of RickMoe Productions and what Mogg is attempting to create with his love of SOV (shot on video) film making. Regardless of the end result, Richard is an affable guy and there’s always plenty to be learnt from listening to him and his commentary on the DIY approach. 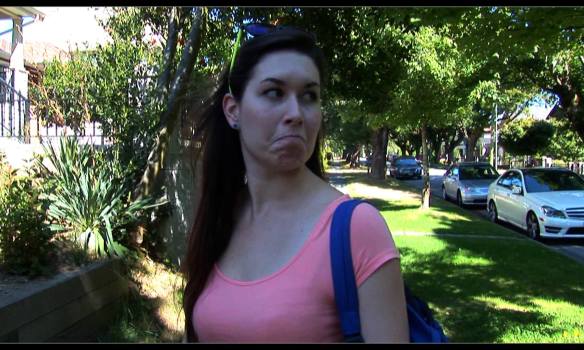 I’ve never been one to deceive my readers so the first thing that you should know about a RickMoe Production is that it’s micro budget. When I say micro budget, I mean chump change. Teenage Slumber Party Nightmare was made with a budget of $100. Yes you heard that right, $100 dollars, which believe it or not is twice as much as he spent on his previous feature “Massage Parlor Of Death”. Mogg often works with the same people, makes his own cheap effects and utilizes his home for shooting. He prides himself on being able to create films on minimal time and money (a nod to some of those that came before him e.g Tim Ritter). The hand drawn poster art for Teenage Slumber Party Nightmare looks great, even if the film doesn’t boast that standard of blood and gore. On the technical side of things, the mostly handheld camera work is serviceable and I enjoyed some of the POV (point of view) shots, despite the rear window of the car being wound down when it would’ve made more sense for it to be the front passenger one instead. The natural audio track was much more pleasant on the ear drums this time around, less screaming and therefore less pitching. The acting is about what you’d expect from the relatively inexperienced bunch. Kaitlyn’s performance is the best of the bunch, that and she’s a cute girl too. RickMoe regular, Kirk Munaweera tries hard and the always funny Kevin Paynter makes a nice appearance as a New Yorker pizza delivery guy (even though it’s not New York haha). There are a handful of kills toward the end of the movie but the effects are home-made and consequently look very cheap. The film does have a speedy run time of just 75 minutes though.

Notwithstanding owning your own equipment, there’s always going to be technical inconsistencies when you’re attempting to make a film on $100. The very opening tripod shot highlights a dirty lens and unfortunately the sun wreaks havoc with a majority of the external shots throughout the rest of the film. Because Mogg doesn’t have a crew (probably due to the cost) he does everything himself and it makes it virtually impossible to block shots, so you end up with bright light piercing into the frame constantly. I’d like to see Richard shoot to avoid the sun more often. There’s a fairly long scene where the three girls are sitting on a porch and it could have easily been shot from the opposite direction and with more cuts so as to avoid the harshness of the sun. Some of the framing and zoom use is a little odd and unintentionally leads the film down the found footage trail, which I’m sure wasn’t the intention at all. Richard does like to shoot handheld and I can respect that simple approach, after all, it was a cornerstone of the shot on video days, but it does however limit variety and the image can become stale. The fight choreography is really quite poor. Perhaps it was intended to be comical, though it would seem out of sorts for a film that is ultimately supposed to be serious. Rob Rochon opts for some high frequency synth notes in the score but they don’t really accomplish much, and the “Texas Chainsaw Massacre” inspired, grandpa mask the killer wears isn’t great either. Some of the actors are guilty of looking into the lens on occasion (whether it be intentional or not) and I can’t ignore the fact that Richard cast Munaweera as a high school student…. the guy’s like 40, not even I can let that one slide. Perhaps an alternative might have been to make him a jealous janitor or groundskeeper? Let’s not even mention his complete lack of stalking skills.

The two most problematic aspects of Teenage Slumber Party Nightmare are the films pacing and the character of Marlo. There’s a lot going on here that doesn’t make any sense, but that would be at least somewhat forgivable if not for the complete slog you’ve got to endure to get to some pretty scarce action on display in the last ten minutes. It takes exactly an hour to get to any of the good stuff, unless you include two characters whose deaths occur from falling from a height. After having watched the behind the scenes featurette on the Blu Ray, I discovered that Mogg had a different design for this latest film, approaching it with more of a coming of age story in mind. Unfortunately I don’t think that’s what audiences are looking for when they hear the title Teenage Slumber Party Nightmare. In hindsight, that marketing may have been a little misleading. This is an extremely talky film that consists of long-winded conversations of little substance. With weak dialogue and time lapses to further stretch out a never-ending game of “quarters”, the film can be summarised as having pacing issues. Clear continuity flaws exist, such as the girls attempting to tan but none of them are wearing bikini’s, Mogg’s recognizable pink phone isn’t connected when it rings and the killer’s power drill has a chord that we never see him plug-in (haha). These are all silly things that you’d expect were done purposely but they’re still issues all the same. It’s also daylight for a really long time in this film, in fact there’s no night-time shots at all. If the characters offered up something more or we didn’t have to listen to Marlo seemingly stoned it would have made for easier viewing. I don’t want to resort to picking on actress, Lauren Richardson, whom I was critical of in Mogg’s most recent film “Bigfoot Ate My Boyfriend”, because I’m sure she was playing the character how it was written, but it begs the question as to why she seemed like she was equal parts high and drunk. Now I know there was real beer on the set, but still. Marlo’s constantly going on about “the best spring break ever”, clearly she’s set the bar low if the groups idea of that is some hot dogs, beer, dancing and a game of quarters… oh how times have changed. Marlo just happened to be a cringe inducing character that I wanted to die in the beginning, but alas.

Teenage Slumber Party Nightmare is a throwback to similar micro-budget slasher films of the 80’s and even recent entries like Steve Rudzinski’s, “Everyone Must Die” and Drew Barnhardt’s, “Blood Cabin”. This is the fourth film I’ve watched from RickMoe Productions and unfortunately it’s probably the weakest of the bunch. I love the artwork, the POV shots were good, the clear audio is among the best of the technical facets and Kaitlyn Yurkiw is lovely and enjoyable to watch. Although the run time is short, the bulk of the film feels like a chore. A lot of the lighting is harsh, the zooming is a parameter of found footage camera work, the creative elements are disappointing and the film might have benefited from Munaweera playing a character his age rather than a student. While I can partially forgive some of the stupid continuity gripes, the sluggish pacing and minimal action both ultimately hurt the film. I’m not too sure what was going on with Richardson’s character, Marlo but she drove me insane. In turn, the perplexed delivery throws off the whole performance. I can respect Richard opting for a more mature process in regard to the coming of age story, but I think the slasher content really suffers and it’s probably likely to turn its target audience off. I enjoyed the behind the scenes learnings from Richard more than I did the actual film, and although I’d like to recommend this one I just don’t think there’s enough good here to warrant 75 minutes of your time. That said, if you’re a sucker for micro-budget horror or you’re a budding film maker you might find something more in it than I did. You can check out the official trailer below!

My rating for “Teenage Slumber Party Nightmare” is 2.5/10