775 Media Corp and Freestyle Digital Media presents “Knuckleball”, the latest Horror/Thriller feature from Co-Writer/Director, Michael Peterson. Knuckleball sees parents Mary and Paul (Kathleen Munroe and Chenier Hundal) offload their 12-year-old son Henry (played by Luca Villacis from Channel Zero) with Mary’s estranged father Jacob (played by Michael Ironside) while they try to reconnect following a death in the family. When Henry awakens to find Jacob’s body stiff and cold, panic sets in and nearby neighbor Dixon (Munro Chambers) sees an opportunity to take advantage of the situation. With a snowstorm fast approaching, Henry must overcome his fears and outsmart the mystery man if he’s to survive the night.

Peterson’s a Canadian filmmaker with an extensive background in shorts, having made a dozen or so over the last decade. I’d heard some positive rumblings in the lead up to the release of this wintry home invasion style flick and wanted to see for myself what it was all about. The snow-covered setting usually makes for a great foundation and often leads to some rather picturesque cinematography. In addition, the element of a snowstorm further adds to the severity of the protagonist’s plight (in this case it’s that of young boys). Jon Thomas conveys simple framing and a bunch of nice shot choices early on. The use of a drone also helps to capture some of those widespread aerial shots on display at the beginning of the film. Furthermore, the color grading looks natural and defined. The audio track is nice and clean, and the score slowly builds around low-fi bass that turns to ominous droning synth as the situation begins to escalate. The film’s pacing is reasonable and there’s an eventful family dynamic at play too. I give Mike some credit for at least attempting to ground the story a bit more, even if it doesn’t always feel convincing. 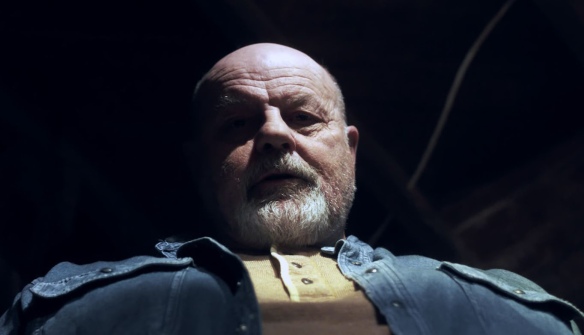 Peterson reunites both a talented veteran actor in Ironside (Total Recall and The Machinist), with a rising Canadian in Munro Chambers to form two of the three pitchers in Knuckleball (see what I did there). The two previously worked together on the criminally underrated “Turbo Kid” *see review* https://adamthemoviegod.com/turbo-kid-review/ and it’s great to see them back together here, despite the two not sharing many scenes. The performances are all solid- Ironside well and truly suited to playing the hard ass- and presents with an aptly dour front. As for Chambers, he gets to play by his own set of rules a bit more and I enjoyed seeing that. Young Luca turns out to be the surprise packet of Knuckleball, which is surprising because it’s usually a gamble when your lead character is a child. It’s not easy to keep audiences engaged for a full 90 minutes, especially when you’re a relatively inexperienced youth, so kudos to him.  The action elements in the film are adequately carried out, though perhaps without being overly memorable. One is likely to draw comparisons to Chris Columbus’s infamous “Home Alone” and in turn, Kevin McAllister’s manning of the house with traps. There can be no denying that Peterson’s script is much darker though (think something like Bereavement) and there are a few effective sequences that involve violence and blood and gore.

Displaying Henry’s phone messages and gaming habits via a separate screen image in the frame isn’t a great look. I understand maybe establishing the medieval style game he plays on his phone in the beginning (if for no other reason than to show him being groomed for what comes later), but several more references in that same fashion to both the phone, the game, and a message, just feel stale. Some of the visual foreshadowing at the end of the first act is rather obvious (not sure if that was the intention), and so when Henry makes use of those items you often see it coming. Even though we do get some insight into Dixon’s motives, they don’t really present themselves until the very end of the film and that hinders how much of an effect his character has on the viewer in the lead-up. What we do learn appears to be a little lacking anyway. It’s made known early on that there’s been a sizeable fracture in Mary’s immediate family. A disconnect with her father and some emotional scarring regarding events that took place at the property during her childhood. One may deduce from that, that it might not be the best place for Henry, Right? I would’ve liked to have seen him either take longer to warm to Jacob (given how little they’ve seen of each other over the years), or the characters to have made mention of seeking someone else out for the “babysitting” duties, in turn, eluding to Mary’s father being a last resort. As I said, Luca’s performance is quite a good one, but Henry’s complete poker face and non-existent reaction to one particularly violent action (really the only one) doesn’t really help to sell the believability. In fact, for a lot of the more intense moments, Henry doesn’t appear to be all that worried. A situation arises that involves a drugging. My question is that if said drug is a hallucinogen (which I was led to believe it was given the trippiness that transpired after) why would you aim to use it on that particular character? On the contrary, if it wasn’t that and a sleeping pill of sorts instead, Why time the visual of those altering effects to coincide with the crucial soda pop scene? That part was a little hazy because at that point there’s no prior evidence of Dixon being anything more than just a little odd.

Knuckleball is a darkly entertaining Horror/Thriller take on something like the aforementioned “Home Alone” or even last years “Better Watch Out” (only far superior to the latter film). The camera work is satisfying, the score is effectively moody, and Peterson tries to bring some family drama to proceedings. I thoroughly enjoyed the return pairing of Ironside and Chambers, and young Luca is a lot better than he has the right to be (at his age and development). Despite some conveniences here and there, things get entertaining as the storm approaches and Henry’s situation worsens. The cat and mouse game is fun and there are a couple of scenes involving some practical blood work. The negatives are mostly personal preference related. I’m not a huge fan of phone content being displayed in the fashion it is here and the foreshadowing is a little too predictable. The reveal of Dixon’s motive is left until late in the piece, Henry fails to react to something pretty shocking, and the drug plot device doesn’t play out all that clearly. In spite of its issues, Knuckleball is 90 minutes of good solid entertainment and I’m looking forward to seeing more films from Peterson and his production company. You can check out the official trailer for Knuckleball below and it’s now available for viewing on VOD (video on demand) and various other streaming platforms.