Away From Here was formerly known as “The Boarding House” was shot way back in 2011/2012 I think? And it’s only now just beginning to surface through Video on Demand and Itunes. I have been following the progression of the film for the last two years with a very keen interest in everything Nick Stahl does. I think he is a brilliant and underrated actor that sadly has suffered from a lot of personal problems over the last five or so years. This is currently his last completed film.

Away From Here is a story about James (played by Stahl), a convicted sex offender that has spent the last 6 years behind bars. He was having a secret affair with the 15-year-old daughter of the pastor that had mentored him. Upon his release, James decides to return home and move on with his life. He obtains a job at a local diner where gets involved with Lily (played by “Justified’s” Alicia Witt) a young waitress and attempts to reconnect with his family. His past, in the form of now 21-year-old Jessica (Mary Boies) along with her father are not prepared for his return. How will James cope and will he ever be able to move on with his life? The film also stars Ray Wise and Frankie Faison.

I was very keen to see this because firstly, it’s a very tricky ane edgy subject matter that divides a lot of people, especially when you throw religion and the church into the equation. Secondly, these types of darker roles are Nick’s forte. All you have to do is take a look at some of his previous work like Bully, The Chameleon and The Burning Palms. They are just a few from his resume.

The first thing that really stands out about Away From Here is the exceptional job of casting for these characters, primarily James and Lily. If that chemistry or relationship breaks down or doesn’t work than neither does the film. Nick is wonderful as James, in the beginning of the film you don’t really know why he is in trouble you just know that he is. I think he is able to convey a lot through emotion and facial expression without having to say much. I draw comparisons between Stahl and Ryan Gosling, sure Gosling has the muscles and the pretty boy looks to go with the talent but Nick definitely matches him with that edge factor and ability to play just about any type of role. Alicia Witt is another great find. She started acting at such a young age Dune was very early on followed by American Girl and Urban Legend and I have followed her ever since. She really hits her straps as Lily. The pain she is feeling is written all over her face and the emotional scenes involving her pack quiet a punch.

When you add “Twin Peak’s” Ray Wise and “Banshee’s” Frankie Faison as Paul (Wise) the pastor from James church and Carl (Faison) the owner of the diner, you have a great ensemble. I thought Ray Wise was very good. He has a wonderful voice for narration and of course he gets the chance to show that off with the sermon in the beginning and closing of the film. I liked that the religious aspect wasn’t overbearing, me being an atheist and all that can sometimes be the downfall with a film like this. It needs to be somewhat neutral to have the best chance of appealing to a wider audience. The technical aspects are all very solid too. The camera work is nice and smooth with a lot of close personal shots from conversations in cars as well as on the streets of the town. The audio is crisp and clear so no problems there either.

The films most powerful moments happen between James and Lily. It’s an odd pairing but it works. Both of them are very reserved and seem to be withholding information from each other. It’s realistic in a way but frustrating as a viewer because you just want both of them to open up and to explore more about who they are. The emotionally intense scenes work really well but I also found it difficult to watch them in conversation because they were both so awkward.

Away From Here despite it’s professional aesthetic appeal, lacks in clarity and substance within the storytelling. I discovered early on that this was going to be a very simple story. There is nothing wrong with simple, some of the best films I have seen have been just that. However, these types of films need to have layers. The characters need to be explored to the fullest. I know it’s probably not like that in real life but this is 90 minutes of entertainment, or should be. A subject matter as dark as this needs more explaining and resolution. In the beginning we see a man and younger girl kissing on a peer and then we are given the “6 Years Later” phrase. My question is 6 years later from what? It’s a very strange way to open a film. I’m not saying give the audience everything all at once but you need to have some kind of event, something that takes place that gives what your about to see some context.

It’s a very slow film to boot. Even after James is released from prison and attempts to reintegrate into society it still lags. The film is only 82 minutes long but there were countless opportunity’s to fix the missing scenes that could have helped advance the story and the character development. You can see in part how these people came to be where they are but the particulars require you to draw your own ideas and conclusions. It’s also a very forward meeting and quick relationship development between James and Lily. Neither of them really found out anything about each other before sort of labelling themselves as partners, I didn’t find that overly realistic. There was no temptation for James to do the wrong thing, which led me to believe that his affair with Jessica was a one-off and that he wasn’t your typical sex offender.

I also figured there would be a moment where people would discover James past and that it would come back to haunt him. The moral thing to do would be to disclose what you have done, but I suppose you would be judged immediately on your past, as shown throughout other parts of the film. I thought if you went on the sex offender registry and you were living in a small town that it would be bigger news when you were released. Something like his re-entry into society would have been reported on in the newspaper, not just locals seeing him out and about, how would they even know who he was?? Jessica played by Mary had her fair share of emotional scenes and she really impressed me with them, such strong acting for someone so young. I was disappointed that Nick wasn’t given the same shining moments. Some of his best work comes from an emotional breakdown or a really angry response. I always think of his scenes with Dennis Hopper (R.I.P) in the film “Sleepwalking”, I was hoping for some more of that here. 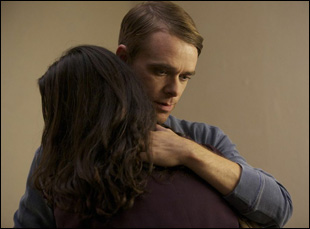 Away From Here is not a bad film, by any means. It’s got a great cast, a simple but interesting story and all the technical strengths those interested in the art of filmmaking want to see. What it doesn’t have is a clear narrative or message. What is this film really trying to say about sex offenders? Is it about the system? The unfair nature in which people are treated and the inability to move on with their lives because of that treatment? Maybe none of that or maybe all of it, I don’t really know. What I do know is that this was a solid idea that was only half explored and that it’s not a film for those involved with the church or organised religion. I’m a huge fan of Nick’s and appreciate everything that he does, I was really hoping for a hidden gem here but honestly I left a little disappointed.

If you are a fan of any of the cast or you enjoy character study pieces, this is worth a look. Just don’t expect anything to really leave an impression on you.