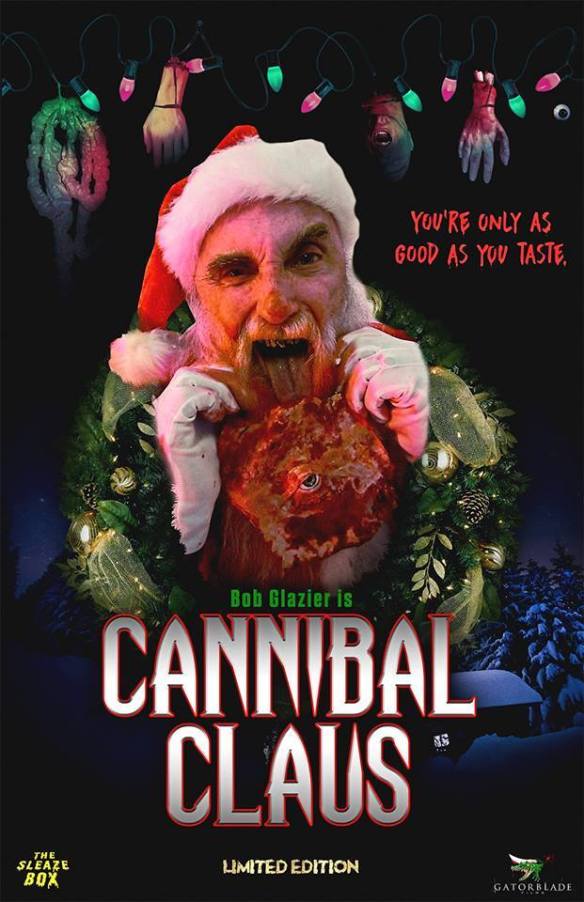 Firstly, I just want to say thank you to Gatorblade Films and Writer/Director, Sean Donohue (Die Die Delta Pi and Death-Scort Service) *see review* https://adamthemoviegod.com/die-die-delta-pi-review/ for allowing me access to an online screener of his latest film, the Christmas themed slasher, “Cannibal Claus”. It’s the holiday season and Nick Cringle aka “Cannibal Claus” (played by Bob Glazier, a regular of Gatorblade) has just been fired from his job as a mall Santa and it’s the last straw. This deranged, cannibalistic madman goes on a killing spree of all those who’ve wronged him. The film also stars Slake Counts, Racheal Shaw, Ashley Lynn Caputo, Joe Makowski, Gia Love and Amanda Welch. Sean’s been directing micro-budget films for five or six years and I’ve been fortunate enough to be able to see a few of them. The aforementioned, Die Die Delta Pi was Donohue’s homage to 80’s films like “House On Sorority Row” and “Sorority House Massacre”, so much so that he even set his film in the 80’s too. Sadly it never really reached any great heights, the standout feature being Marcus Koch’s practical effects work. Sean followed up with the much more violent and trashy, Death-Scort Service. While repetitive in its execution and barely containing enough content to actually warrant a film, it still somehow managed to showcase good effects and offered something for fans of this type of schlock. Combined, both films were made for less than $10,000, bringing me to Cannibal Claus, the lowest budget film of his.

Well, most of you know I’m a sucker for a holiday themed slasher flick, it gets me in right off the bat. Classics like “Black Christmas” and “Silent Night” are among my favorites, as well as recent indies like “Dismembering Christmas” *see review* https://adamthemoviegod.com/dismembering-christmas-review/. It’s nice to see Donohue’s film wearing its Christmas decorations with pride, especially considering it was made on a such a small budget. The intro credits consist of some really talented and unique hand drawn artwork, accompanied by a nice keyboard/synth music theme. The audio bed is a little hollow but the levels are consistent throughout the film. One of the best aspects about the film (if not the best) is Toshiyuki Hiraoka’s score. He’s a great composer and uses this setting to put his own off kilter, spin on all the traditional Christmas music we know and love. There’s also piano that acts as background music, it’s nice enough but not really essential to the film. Donohue also formulates his lighting in accordance with the films holiday theme. There’s a heavy reliance on reds and greens that light a lot of the internal shots. It looks decent but in terms of practicality, you might ask where the light is actually coming from?

The performances are somewhat of a mixed bag, but overall, better than I expected for a movie of this budget and nature. The cast is mostly made up of people who’ve appeared in Sean’s other films. Glazier gets all the screen time but doesn’t get to do a lot with it. In terms of dialogue, everything he gets is in effect, a rhetorical quip. Slake is solid in his couple of scenes and Alberto, Mady and Lucio Giovannelli (yes a family of actors) who appear in a couple of flashback scenes are okay as well, bar some scripted dialogue delivery. The best acting is that of Racheal Shaw, playing Eileen “The Stripper”. Shaw was in Death-Scort Service and looks great again here, making her screen time count. Cannibal Claus is all about catering to the male population with its overly sleazy veneer. It boasts sexy and real women/girls (in terms of body size and variety), most of whom get either partially or fully naked throughout the film, being depicted in a voyeuristic manner. Donohue’s regulars in Welch and Caputo bare all and one particular hot and steamy slow dance is lustful. My favourite of the women on display here was Gia Love, who plays Gina. She’s only in the one scene but carries herself like a confident and curvaceous, pin-up girl type. The practical effects in Cannibal Claus are pretty reasonable given the minuscule budget. We get some limbs, a prosthetic head and plenty of meaty entrails.

There’s a handful of technical things that weren’t to my liking, or simply weren’t executed very well (even in the confines of the budget). Don’t get me wrong, there’s always going to be issues when you make a feature-length film on $1,200 (estimated), that’s natural. All you can do is control what’s in your hands, namely the procedural stuff. A lot of the shot choices here feel like extreme close-ups, now I’m sure that’s not the case but there’s still an excess of them and that ends up making the entire film seem like one big close up. Some of the handheld camera work gets a bit tedious at times, though that’s more of a personal preference criticism. There’s some odd abrupt edits and transitions from scene to scene, not to mention a number of sequences that repeat themselves entirely. Example being when Nick drives down the streets and you can see the houses decorated with lights and ornaments. That exact same sequence occurs again ten or fifteen minutes later. It’s bad enough that you have to double up on locations in independent films, let alone repeat whole sections just for the sake of it. I can deal with the fact that the film transitions from a strip club exterior to an interior of Donahue’s house (or someone he knows), or that the same house acts as multiple characters houses, because in the end I understand budget constraints.

There are issues with sound especially when characters scream and it spikes, and most of the foley sounds poor in regard to matching the intended sounds. The hits don’t really correspond and one particular scene that sees Nick eating human flesh, sounds embarrassingly bad. Some of the repetitive music gets tiresome as well, and on a couple of occasions there’s what sounds like jolting in the soundtrack. As I already stated, most of the dialogue throughout the film is rhetorical and the rest is usually steered by profanity. There’s puns that aren’t very funny and big chunks of the delivery feel wooden. A sequence involving Joe and Nick (played by Makowski and Grazier) falls well short of where it needed to be, performance wise. After Nick attempts to attack Joe and his girl, Joe gives his best “I’m going to kill you” threat and proceeds to call Nick every name under the sun while choking him and it all just comes across as trite. The first death in the film is via strangulation and it’s rather uninspired (considering Sean normally creates better kills). Then the film tries to pick itself up off the canvas with some cool prosthetics but unfortunately the only image left in my head is one of Nick’s disturbing behavior with a head that I could’ve done without seeing. Cannibal Claus is a fleeting 66 minutes and that’s including the credits. So it begs the question, Why does it feel like it goes for an eternity? I can only really chalk it up to a lack of story content with scenes extended well beyond their ideal length.

This angry Santa has a list of names and people he plans to visit throughout the night but the only one we actually get an official introduction to is Ralph, Nick’s ex-boss. What’s Nick’s motive? In what way did these other people wrong him? Did they even wrong him or does he simply deem them unworthy members of society? Minus a couple of meat related childhood flashbacks, there’s no insight into why he’s actually killing anyone. Every scene in Cannibal Claus just drags on and on, then moves along to the next with no real purpose. The horrible holiday themed filter in those scenes with Nick and his helpers (played by Krystal Pixie Adams and Stephanie Jensen) was quite distracting. Not to mention the scenes themselves, which should have been cut because they served no purpose. The cooking scenes toward the end of the film, and the lesbian spanking scene (as fun as it was) wear out their welcome pretty quickly too. The lack of quality in the kills was the most disappointing part about Cannibal Claus. Not the effects themselves, it’s more the foley, the impact and what’s actually presented on-screen. Who knows, maybe I’m just being harsh and you can put it down to having no budget, and if that is the case, I say maybe wait until you’ve got a few more thousand in the kitty before you start shooting.

I admit, I saw a couple of more non favorable reviews regarding Cannibal Claus before I actually watched the film (I usually don’t look), but I always go in with an open mind and often end up disagreeing with other critics regardless. This is the third time Sean’s made a film in the Horror genre and what I like is that he’s set these films in three completely different worlds. The colorful lighting works well and Toshiyuki’s Christmas score is one of the best that I’ve heard in a film of this nature. A majority of the performances are passable but I think it’s Glazier and Shaw who do the best work here. The sleazy approach toward full frontal nudity and the women in general, will please a lot of the male viewers (I don’t imagine the film would get many female viewers). The practical effects are worth mentioning, it would’ve just been nice to see more of them and better kills, but hey, that’s micro budget film making for you. There’s plenty of shortcomings from a technical point of view (some aren’t budget related) and a series of personal preference related issues that I didn’t like. The biggest problem is that the movie drags because there’s very little story here and the exposition we do get doesn’t really give you much to go on. In the end I think this is probably Donohue’s weakest film but I’m sure there’s a market for it and others might get more out of it than I did. I’d describe it as much more of a soft-core porn (or more accurately Christmas themed soft-core porn) than a slasher flick and if you’ve got an urge to watch soft-core porn I’d throw in “The Teenie Weenie Bikini Squad” or “Bikini Time Machine” or any number of Fred Olen Ray or Jim Wynorski’s films before opting for Cannibal Claus.