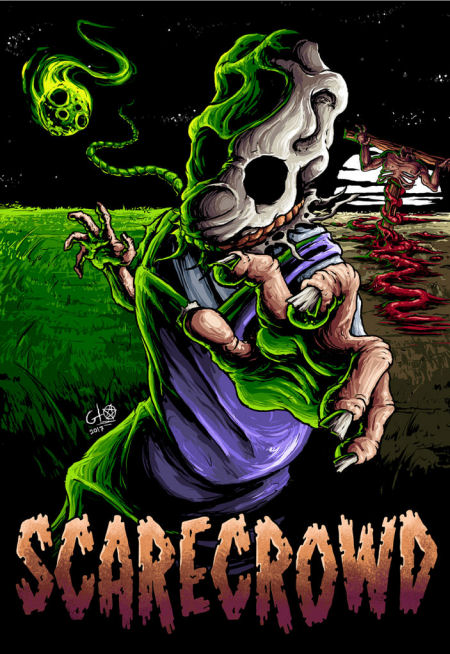 Bought to us from SRS Cinema and Melting Pictures, comes “Scarecrowd”, the debut feature film from Writer/Director, George Nevada. Scarecrowd is a part American, part Italian, Horror/Sci-Fi film about a local farmer named Tony Maio (played by Fabrizio Occhipinti), who mysteriously transforms into a demented mutant following a meteoroid crashing to earth. He disguises himself as a scarecrow and begins to rid earth of its humanity. The film also stars Gabrielle Bergere, Antony Ferry, Ruby Miller, Karen Lynn Widdoss, Frances Williams, Danny Willis and Raphael Willis. 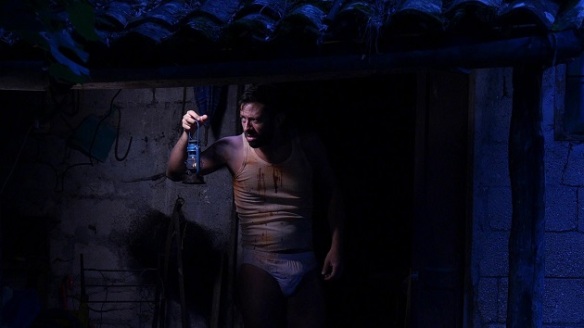 I stumbled across the IMDB page for “Scarecrowd” (formerly known as The Musk) a while back and after having networked with Antony Coia, who composed the films score, I jumped at pre-ordering the Blu Ray from the guys at http://srscinema.com/. I’m a huge advocate for low-budget and independent film making and it’s websites like the aforementioned who are releasing this type of content, so make sure you support them. I really like the Scarecrowd poster art and the Giallo inspired, psychedelic opening credits to the film. With a multitude of diverse influences, Nevada throws caution to the wind by engineering means with which to include said connections, even if the film doesn’t really call for it. The grindhouse element is present through Nevada employing a constant flickering and popping of the image. The exploitation on display with the way he lingers on female nudity, the voyeuristic component of the shower scenes comes to mind. The camera work is generally pretty good, a lot of simple still shots that coincide with the films small budget. Some of the low angle framing works nicely and there’s the odd highlight in editing, most notably when a young man’s bike headlight fades out and turns to a shot of the moon. A big portion of the film takes place at night and most of it was lit atmospherically. Coia’s heavy reliance on ambient synth in the mix complements Scarecrowd’s trace of 80’s nostalgia. 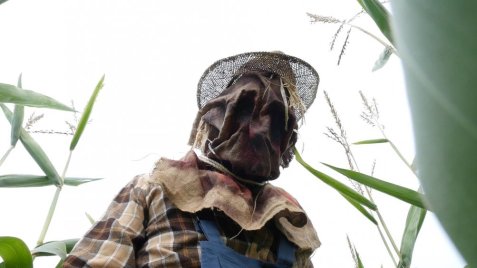 While the look of our newly modified farmer isn’t exactly original, calling to mind villains of films like “Scarecrows”, “The Redwood Massacre” and “Husk” (just to name a few), he’s still well conceived. Nevada does right by his core audience with the subsequent rules of Horror 101 by introducing an early kill and some nudity as well. Given the films short running time, the body count is relatively high and the blood flows adequately throughout. Most of the kills do occur on-screen and when they’re boasting their practical effects it’s usually resourceful. The tearing of flesh from the face of one unfortunate park-goer is probably the standout kill, though Nevada does attempt a decapitation, albeit it looks so-so. I have to commend George on his commitment to the visual effects side of the story. There’s a handful of scenes in space and others involving the crashing comet and its after effects, which generally look better than what you’d expect from a $40,000 film. The digital compositing is one of the hardest things to get right and even though some of it does look pretty cheesy, its ambitious all the same. There’s a hodgepodge of ideas at play in Scarecrowd but I’ll admit that the Psycho inspired shower scene was a good bit of fun. I say it’s inspired by, but let’s be honest, everything from the torn curtain, to the girls reaction and the crimson water gushing down the drain, it’s Hitch’s iconic scene straight up lifted, only void of suspense. 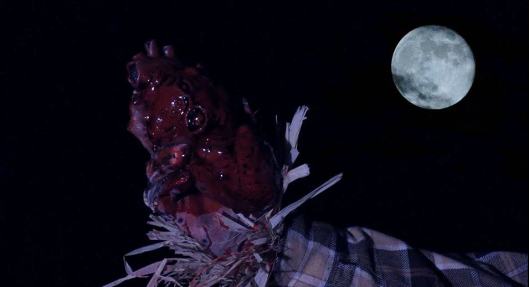 Like just about all low-budget films from first time filmmakers, Scarecrowd has plenty of technical issues and things that reek sub-standard. Some of the framing looks a little tight and uneven at times, only further compounded by some horribly bright and colorful filters that are used on several occasions as we watch from Tony’s point of view. The indisputable ADR (additional dialogue recording) that goes back and forth between actors, appears present in just about all the dialogue sequences (which fortunately are few and far between). The reaction times from those actors are quite poor, either that or the mix is just horribly off. A lot of the foley effects are problematic and seldom do they even match the desired action. E.g, Machete piercing skin sounds more like someone punching a bulky item. Despite the better than expected CG in early parts of the film, the digital blood was atrocious and some of the worst that I’ve seen in recent times. What makes matters even worse is that it wasn’t necessary. The practical gore wasn’t anything special but they used it during most of the films kills, so why not in all of it? Rig up some tubing and spray it back at the actor instead of editing trickling blood onto the lens. At one stage there’s even a CG car that a couple are sitting in, Why would you use a CG car for that!? At least I think it was CG, either that or someone did something very strange with the lighting and backdrop in post. This group of rather raw actors seemed determined to deliver their lines like those in a 50’s B movie and I really didn’t like it (as much as I like 50’s B movies). When you combine the delivery with the clashing ADR, you end up with a bunch of lowly performances right across the board. I did enjoy sections of Coia’s score but there’s also some very random blues music thrown in that really doesn’t fit. 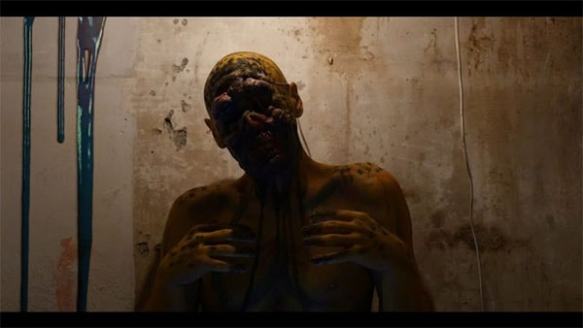 Despite the speedy 77 minute run time, the pacing still seems sluggish, and if not for multiple scenes that run twice as long as they needed to, I very much doubt Nevada would’ve had enough content to warrant a full length film. There’s two repeated sequences of shots, one as Tony watches a young woman through the window and the other displays the women from the neck up as the water rolls down her. Later, horses are shown in an around a stable for what feels like five minutes, followed by a stable hand who sweeps hay and cleans up, I’m not sure what the point was of any of that. In the beginning of the film there’s a deceptively lengthy shot of a beautiful young girl frolicking through the cane fields, it’s pretty lame in all honesty. You’re sort of led to believe that someone is chasing her, though unlikely based on the way she’s dawdling along. Long story short, eventually something other than fooling around with her boyfriend happens, but with a hollow scream and a lack-lustre first kill, it’s somewhat of an uninspiring start to proceedings. Other specifics such as characters never running away from Tony with any sense of urgency tended to annoy me (unless of course you’re implying comedy), so to did a lot of the complete randomness within the film. There’s way too much patchwork in Scarecrowd that the movie loses all sense of its tone. From the graphic novel captions so far removed from the slasher sub-genre, to the bizarre science fiction sub-plot involving the entity wanting to re-populate its own planet with human seed. It all seems redundant to what is ultimately a revenge fueled slasher film about a simple downtrodden man. Cryptic other worldly narration, baffling salutes to The Wizard Of Oz and a random muscular camper playing Queen on a harmonica are just a few more examples of the obscurity in Scarecrowd, I ask again, Why? What drove all these ideas? 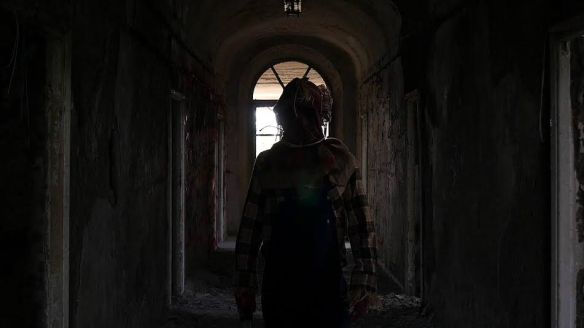 Scarecrowd is an extremely ambitious low-budget undertaking from a first time film maker in George Nevada, and although it wasn’t entirely what I expected or wanted, I have to commend the effort. It’s a hard film to categorize but it feels like a mix of the straight to video “Scarecrow” from 2002 and the popular 80’s film “Pumpkinhead”. I think there’s a few too many techniques on display here but the film works best with its grindhouse presentation. The camera work is solid, the lighting is nicely conveyed and the odd creative cut, if nothing else, makes for an interesting edit. Tony’s look and attitude as a killer works in the confines of a slasher flick and there is a high body count for those who get bored rather easily. The vfx aren’t too bad and a couple of sequences are pretty entertaining, especially when the practical effects are on display. Far too many of the technical aspects are well below par though and therefore become a burden to the end result. The colorful filters are amateurish, the ADR stands out like crazy, and chunks of CG blood and visuals are bordering cringe worthy. Unfortunately I couldn’t get behind any of the performances and the film continues to run over its previously established ground on more than one occasion. The mishmash of random events and character quirks took me right out of the film, and for that reason it’s not something I’d really recommend to fans of the slasher genre. That said, If you do like a mix of the bat shit crazies within your horror, you might find something here that I couldn’t.