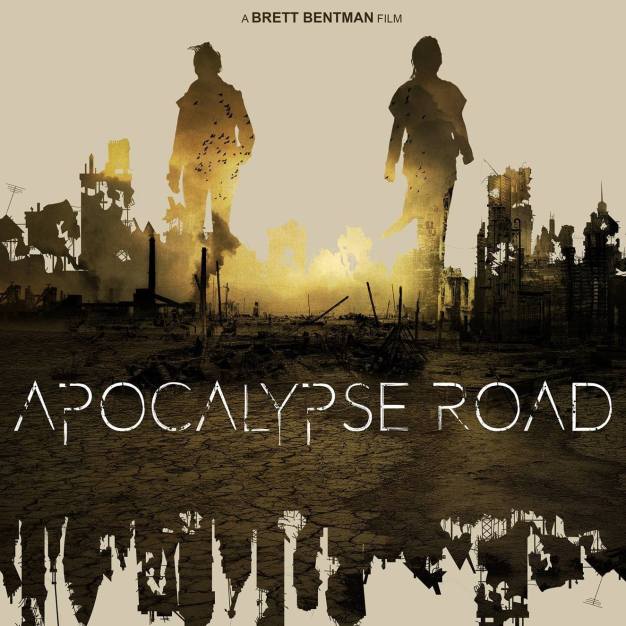 Firstly, I’d just like to start off by saying thank you to Writer/Director, Brett Bentman for allowing me early access to an online screener of his post apocalyptic Drama/Thriller, “Apocalypse Road”. Apocalypse Road follows the journey of sisters, Natalie and Sarah West (played by Katie Kohler and Ashlyn McEvers) who during a post apocalyptic depression, attempt to make their way toward the only safe haven they know, the coast. The film also stars Billy Blair (The Cain Complex), Todd Jenkins (Knucklebones), Lance De Los Santos, Ben Rigsby Jr, Tiffany Heath and Nellie Sciutto. I only recently discovered Brett Bentman, a Texan based filmmaker, after having stumbled upon a trailer for one of his upcoming films titled, “The Night Before”. Brett began writing and producing short films back in 2013 eventually starting his own production company, Circus Wheel. Apocalypse Road is his first full length feature but he’s also got three more films in the post production phase, each of them a different a genre to the next.

Bentman’s screenplay calls to mind the likes of John Hillcoat’s post apocalyptic slow burner, “The Road”, while still identifying with other indies like “The Battery” and “Young Ones”. It’s a familiar premise but one gift wrapped with its own specific agenda and presentation. I knew immediately that I was in for some high quality production value. Brett did what a lot of film makers do (especially independent ones), he went out and learnt the craft through shooting multiple shorts before even considering tackling something bigger, and its payed dividends. There’s an array of locations used throughout the 85 minute run time, as well as some sizeable set pieces. DP, Michael Ray Lewis really knows his stuff, with just about every frame of this film exquisitely shot. The framing is consistently good and the shooting style in general is smooth. Cinematography is a huge deal on all films but even more so on indie features because you don’t necessarily have the highest quality gear at your disposal. Brett and his crew made some really bold decisions and clearly wanted to exhibit as much diversity as practically possible. There’s a few wonderful ideas at work, like some gorgeous focus pulls during a dialogue scene between Natalie and Derek (played by Rigsby), lots of tight close ups and even a grand shot of gentle water flow in a creek bed that slowly turns crimson (reminiscent of “The Revenant” only on 0.1 percent of the budget haha). There’s also a handful of perfectly conceived tracking shots including one that goes sweeping over a junkyard full of scrap metal, through the side of a van eventually landing on the other side. I think this might be the smoothest shot independent film that I’ve ever seen. For once the chase sequences aren’t done with the DP on foot, trying to run like a crazy person and balance a Steadicam (film makers take note).

As for the lighting, most of the film is shot during the day and it looks sharp, but even the night sequences are well-lit. The crisp and clear audio track is another one of the technical accomplishments in Apocalypse Road. David Levy’s music is atmospheric and prevalent in the mix. The film opens with a Shyamalan, “Signs” esq piano score and only starts to intensify once the severity of the sisters circumstances do. The underlying theme remains the same but as the character arcs change, the pounding bass kicks in under the keys. There’s some low-fi synth (think “Drive” in style) that plays during some of the more suspenseful scenes and that worked well too. Apocalypse Road doesn’t contain a great deal of action and often that can hurt a film, fortunately that’s not the case with Bentman’s debut feature. There’s a couple of prosthetic pieces that are briefly shown and some action that involves gun play, but that’s about the extent of it. Going back to the script, Brett establishes some early drama during the first act and it helps you engage with our sister pairing of Natalie and Sarah. You don’t know the magnitude of their troubles but you know there’s some definite animosity there. Bentman shows confidence with the willingness to force his characters apart, and in turn the narrative in order to share their individual experiences in the same time line. I was fully engaged for that very reason, otherwise it’s too easy for things to get stagnant in this type of film. There’s also the inclusion of a couple of genuinely suspenseful scenes (something rarely seen in a post apocalyptic drama). The forest sequence comes to mind, as does the beginning where the sisters have to navigate a corridor full of bodies and later they’re even hunted by a military man (of sorts).

The casting choices for Apocalypse Road are smart especially when it comes to the West sisters. Not only do Katie and Ashlyn look remarkably well suited to play sisters, they’ve both got the natural talent required to carry a film that’s grounded in drama. Neither of them have the right to be this good given they’ve only got a couple of credits each to their name. The interactions are believable and the dialogue between the two flows quite naturally. Todd Jenkins, Billy Blair and Tom Zembrod play a trio of drifters with their own agenda, who happen to cross paths with one of the sisters. These three have worked together previously on films such as “Blood Sombrero” and the aforementioned “Knucklebones”, so they’re all familiar with each other and it shows in the groups dynamic. Jenkins’s, Roger leads the pack and the other two wield the weapons and follow the orders. The acting from all three is pretty solid. Sciutto and Heath aren’t given much to work with, and in fact neither is Santos, who plays Hugo, a mysterious and dangerous man with a rifle. He looks the part but there’s little to be learnt about the character due to his lack of dialogue and references. I suppose the same can be said about Tiffany’s character, The General. She appears to occupy a Victorian style mansion full of servants (on the face of it, they’re seemingly sexual ones) but the true purpose of it remains unknown. Rigsby plays Derek, a young man looking for company more so than anything else. He stumbles upon Natalie as shit hits the proverbial fan. His opening scenes weren’t bad but I never really warmed to the character.

I happened to spot a couple of minor focus issues during a scene or two, usually occurring when the camera was on the move and with a characters face in frame. As I said, I didn’t love Rigsby’s performance, though it didn’t help that the character offered very little. He, too, has very limited experience with acting but the difference between him and the girls was that unfortunately his showed up in some of the scenes. My only other minor complaints lie with some of the details in the story. There’s one scene involving Hugo that I can only assume is purposely revealed out of sequence. He’s shown interacting with The General as she persuades him to do her bidding in return for time spent with one of her girls, I may have missed something in there but that’s how I read it. The point that scene takes place at doesn’t seem to fit the timeline, so I’m assuming it was a flashback. Although if it’s a flashback it would be more logical to give us something of importance, exposition based, so we can better understand who he is. In another scene with no real suggestion, Natalie suddenly just knows about these soldiers/military men (whatever you want to call them) and what they do, but even more farfetched than that, she knows where to find them. She offers a deal to said man (played by Tony Senzamici) for safe passage to a place she believes will offer asylum. I couldn’t see the logic in her making a deal and sacrificing who or what it is that she ends up sacrificing, especially while believing that her sister is still alive somewhere. Some of those finer points didn’t quite add up for me.

Apocalypse Road was my first foray into the work of Brett Bentman and I was extremely impressed with the end result. The film contains some of the slickest cinematography you’re likely to see from an indie film, and if nothing else, it will go down as one of the first of its kind to avoid shaking the camera profusely during its chase sequences. There’s a number of fantastic shots you can single out here (and I did), not to mention the lighting and audio are great. The score creates a stark mood that goes hand in hand with the post apocalyptic setting. Bentman’s writing and pacing is superior to most of what I’ve seen done in this setting, the specifics surrounding the sisters is where the heart of the film lies. There’s good drama and solid suspense and a majority of the performances are surprisingly good, especially when you take into account the limited experience overall. Aside from the odd hiccup in performance and the finer points of the script raising some questions without answers or a lack of plausibility (at least from my viewing), they don’t come any better than Apocalypse Road. This is far in a way a better paced and more entertaining film than the aforementioned “The Road” and contains plenty more substance than its other counterparts like “Young Ones”. I highly recommend checking Apocalypse Road out when it becomes available and I’m looking forward to more films from Circus Wheel Productions!