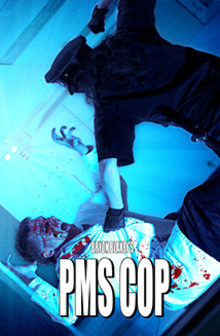 Firstly I would just like to say thankyou to Bryon Blakey (director of PMS Cop) for allowing me to view a screener of the film before its official release date. PMS Cop is a story about Mary, a police officer (played with great enthusiasm by Heather Hall) who is caught on live tv beating a clown rapist. After a series of unfortunate events and a friend’s death she is forced by the department to take part in a big corporations experimental drug trial for a PMS inhibitor known as Corybantic. The side effects haven’t really been discovered yet and what follows is carnage and mayhem where no one is safe.

The film stars Heather Hall, Cindy Means, Elaine Jenkins, Megan Dehart and David J. Lee. It was shot in Springfield Missouri for an estimated budget of $30,000.

PMS Cop has a very unique premise. Although it’s a completely ludicrous plot, it’s an entertaining one. It pays homage to certain films like “Kill Bill” with a fondling scene in a research ward and also the 80’s slasher film “Maniac Cop” (one of my favourites). I liked that this had a real 80’s vibe about it. It’s got some very smooth close shot camera work. The research facility hallways made for crisp panning and movement that works well considering the limited funds. The audio was a bit hollow in the beginning of the film but improved very quickly in the second and third acts. I like the use of muted inaudible dialogue when Mary is on the verge of snapping. Let’s talk about the character of Mary for a minute. She is a bit of a potty mouth but she still seems really likeable. She is very quick-witted and doesn’t take anyone’s shit. I think Heather played the role really well and is clearly the standout in and otherwise lack-lustre cast. 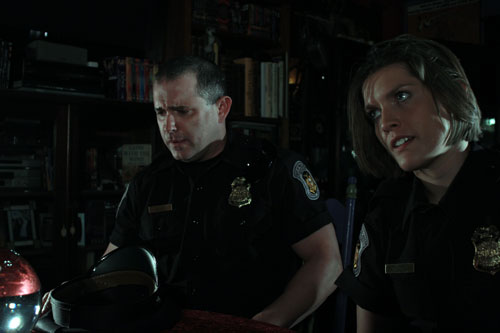 It’s nice to see a bit of back story on Mary and why she has these episodes and anger issues. It wasn’t delved into nearly enough, but I suppose that wasn’t the main attraction of the film. I also enjoyed some of the suspense score throughout the chase scenes. The action itself lacked any real suspense but at least the score was commendable. The strongest aspect of PMS Cop is the cool realistic practical effects and blood. A couple of truly brutal kill scenes will definitely go down as some of the best I have ever seen, given this very small budget. One in particular stands out for its far-fetched but super slapstick nature.

Sadly the bad outweighs the good when it comes to PMS Cop, even taking that small budget into consideration. Like I said the audio needed some work in the opening 15-20 minutes of the film, along with some of the music choices leaving little to be desired. The entire film is terribly lit. I was hoping it would get better as it progressed but if anything it got worse. The actors faces can hardly be seen during the whole second half of the film and there is no excuse for that. The only scenes that sort of worked were the daytime shots which were few and far between, It was the most disappointing part of the film. The acting by all involved with the exception of Heather was well below par, some of it even cringe-worthy. The character of Doctor Sokolov and that terribly inconsistent Russian accent made it impossible to take her seriously. The character should have been written as an American because the European touch was just distracting. 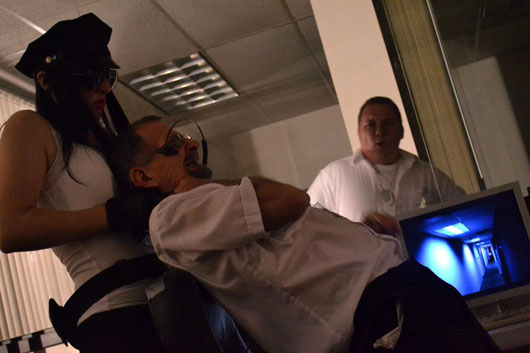 The choreography for the action/fight scenes was poor as were the sound effects. It either wasn’t in synch properly or their was no sound to accompany the action. There were a few small issues like the cop car not looking like a cop car but I can handle that because it wasn’t that important. Sadly the core of the film is lost in the entire second and third acts. Way to much time was spent on experimenting and investigations into the effects etc, which all took place in incredibly dark rooms. It needed to be more slasher orientated because the quality of the blood and gore effects was great so a lot more of that was needed. As soon as Heather left the film and Cindy entered as PMS Cop it just didn’t have the same feel. I didn’t realise the two parts were going to be played by separate actresses. I’m not sure if the decision to do that was the right one, considering Cindy doesn’t say anything for her entire screen time.

Unfortunately PMS Cop had to many pacing issues for me to want to revisit it a second time. It’s a real shame because it’s a cool and unique idea with a great leading lady and some cool practical effects but the screenplay is just not up to scratch. I commend Bryon on his effort here though. I believe this is only his third time directing so I have no doubt that he will improve and soon enough he is going to combine all the elements for a winning result. I still think given the budget this is worth a look if you are struggling for something to find on a Saturday night.