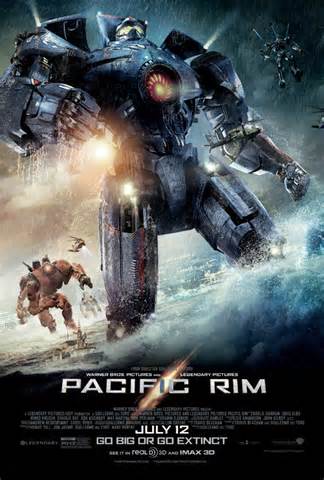 Guillermo Del Toro’s “Pacific Rim” was in my top 5 or so anticipated films of 2013. I was very keen to get to the theatres and see it. I got out on Saturday night and saw it, for those of you who don’t know much about this film, I think it will be the biggest sci-fi film of the year.

The basic theme of the movie is a war between mankind and monstrous sea creatures from beneath. “Kaijus” as they are called, want control of the earth for reasons unknown (that is until later on in the film) There are different category monsters which cause varying amounts of damage. The military has built “Jaegers”,gigantic mech’s made of steel, they have the ability to destroy “Kaijus”. It takes two people to operate a Jaeger. The process is that the two sync their minds and memories, allowing them to move and fight as one. Pretty cool aye!

In the beginning of the film we see Raleigh (Charlie Hunnam, “Sons Of Anarchy”) and his brother Yancy Beckett as they go into combat against various Kaijus. With no warning tragedy strikes and Raleigh barely escapes. The story carry’s on several years later, the war between planets on the brink of destruction. Stacker Pentecost (Idris Elba) who is in command to lead the fight to save the earth, he is quickly running out of Jaegers and skilled operators to take them into battle. Stacker tracks down Raleigh in the hope of luring him back to the fight. He introduces Raleigh to young Mako Mori who Stacker has taken under his wing (Rinko Kikuchi)

There are a couple of small role’s in here for Charlie Day (Horrible Bosses) and of course Ron Perlman. Ron has a funny little performance as Hannibal Chow a dealer on the black market. Hannibal specializes in the remains of Kaijus, he looks for buyers who wish to study and learn more about the monsters. He profits greatly from this process.

So that is the basics of the story. “Pacific Rim” I think is a must see in 3D or an Imax theatre, it’s just a visual feast. It has great landscape shots of iconic things like the Golden Gate Bridge (although most of the story is in Hong Kong) The monsters look absolutely fantastic, larger than life. Remember when you use to watch your favourite monster movies? This is a great nod to some of those but at the same time it’s new and improved in special effects and battle sequences. The action sequences and sound mix are great. You have huge explosions, fights in the water and fights on land. One of the standout scenes has Jaegers and Kaijus using freight-liner’s and buildings to beat each other down, its great stuff! I must also add, whoever put the trailer together did a fine job of leaving the best bits out. Most of the trailer sequences take place in the opening act. What follows just adds to the cool chaos!

I thought the cast was pretty good. I think Hunnam did a solid job, although I am still not convinced on the choice to have him as the lead in the film. I’ve seen him come from a Drama/Theatre background, I almost think this is a little beneath him. None the less he is good. Idris and Rinko for me are the two standout performances, you are more emotionally connected to their characters. I don’t know if it’s the way the opening act was written or not but It felt forced and rushed. The needed to spend longer on forming the bond between the brothers. They could have achieved this without adding to many more scenes. Ron Perlman of course was funny and really styling in his role as Hannibal Chow (the Jew with an Asian name haha!)

I thought the one thing which was a little out of context was the comedic moments from Charlie Day. I feel they could have taken the impact of what was happening and the severity of it all much more seriously. I didn’t like his role at all however the english scientist was funny.

For the most part, this is just good old fashioned entertainment. It’s full of larger then life monsters, cool weapons, and big battle sequences, what more can you ask for? I am still critical of certain things in the story. I don’t think the memory syncing scenes were all that well put together, very rapid and unclear. If they were supposed to give us clues and more information about the “Kuijus” it didn’t. I also find it hard to believe that four or five helicopters have the carrying power to lift and drop a “Jaeger” in the ocean (I guess I can roll with that though) I didn’t think the father and son combination added anything to the mix, maybe more out-of-place comedic moments. They did have one stronger scene towards the end but the rest of the time they were unnecessary. The film’s biggest issue is probably the gateway to which the monsters enter earth. The information surrounding that (or lack of) was a flaw. How did they find it? Why didn’t they find a way to attempt to close it much earlier? It all seemed a little bit loose ended to me.

Overall it’s a very good film. It reminds me how I felt about the second Transformers film. I don’t think anybody else could have directed this (Maybe Michael Bay) I don’t think this is as good as the original Transformers but it’s still a tonne of fun. I haven’t seen to much of Del Toro’s work yet, but after having seen this, I think I will be.