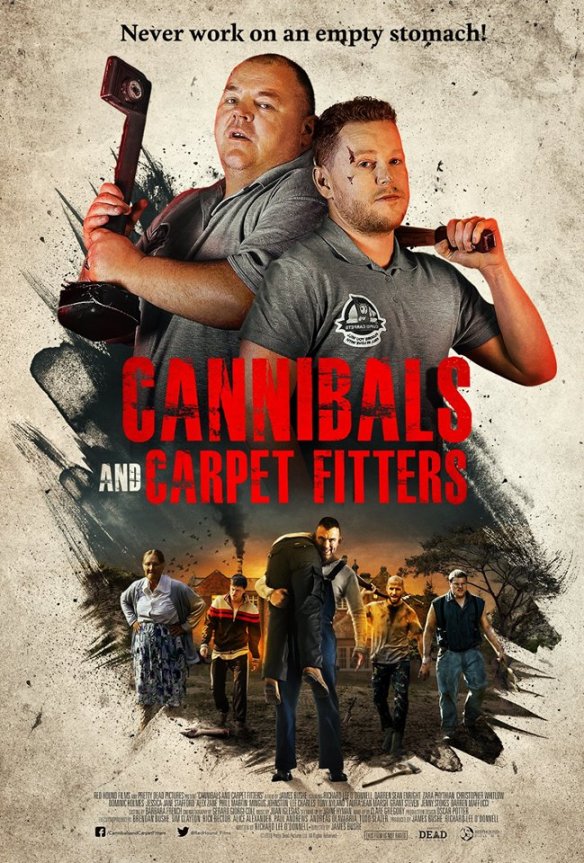 Firstly, I’d just like to say thank you to Pretty Dead Pictures and Director, James Bushe for allowing me early access to an online screener of his Horror/Comedy film “Cannibals And Carpet Fitters”, Written by Richard O’Donnell. Cannibals And Carpet Fitters sees two groups of carpet layers assigned an install job at an old lavish countryside home. Chris and Tasha (Christopher Whitlow and Zara Phythian) are the first to arrive, and shortly thereafter, the trusty two-man team of Colin and Dean (played respectively by Darren Enright and O’Donnell himself) show up. However, they quickly discover that something is amiss with Mrs. Hanning (played by Jenny Stokes) and her four boys, and the pair are thrust into a fight for survival on the isolated family property. The film also stars Dominic Holmes, Tony Nyland, Laura Jean Marsh, and Mingus Johnston.

Cannibals And Carpet Fitters was initially conceived as an 18-minute short film back in 2014. I didn’t review the film but I remembered it being quite entertaining, and I’ve followed Bushe’s development of the feature-length film since. It doesn’t hurt that I myself am a carpet layer (not that the trade has a whole lot to do with the film), so despite the far-fetched particulars, I can certainly find relatable aspects in the situational comedy of O’Donnell’s script. The cinematography is generally quite good. A majority of the shots are well conceived and the framing is consistent. I commend James on his ability to successfully navigate the edit of a number of jump cuts appearing at the beginning of the film. Usually, it’s a technique that’s poorly executed, such is not the case here. The Hanning house makes for a lovely location (If memory serves me correct it’s the same place used in the short film) and Bushe is able to engineer those tunnels from the short into the feature as well. The audio track is nice and clear and Juan Iglesias’s score utilizes plenty of high-frequency synth with additional musical cues during suspenseful moments. James and Juan previously teamed up on a short called “Predator Dark Ages” so it should come as no surprise that there are some Predator Esq themes to the score in Cannibals And Carpet Fitters.

It’s fresh to find a writer with a good clean comedic approach to this material. Often they feel the need to be crass by littering their scripts with profanity or penning an abundance of low-brow toilet humor gags. Here, O’Donnell opts for simple jokes and lines of miscommunication, some front and center and others slightly understated. Youngster, Malcolm (Holmes) has a humorous back and forth with Colin and Dean regarding the whereabouts of his car, but other funnies such as the notion that a cup of tea can fix anything, and Dean’s response to Hanning’s line “I would have thought it’d be obvious what we want” with “Does she still want her carpet fitted?” are just good-natured one-liners – fun stuff. The performances are all pretty solid and everyone appears to be having plenty of fun, but it’s Darren and Richard (who appeared together in the short) who keep the entertainment value high. There are a few genuinely surprising moments of action in Cannibals And Carpet Fitters. The most notable being a realistic crash involving a car and one of the cannibals. The make-up fx are quite good and there’s ample practical blood spray over the course of the 80-minute runtime. Highlights are a cool aftermath shot from the first kill, an arrow in someone’s face, and a sudden and gory split with an ax.

On the technical front, the only thing that looks somewhat amateur is the early handheld camera work during the first ten minutes. Both Jack and Jill (Alex Zane and Jessica Stafford) have a tendency to zoom in an out constantly as they film and it doesn’t make for great viewing. There are a couple of continuity issues, or more appropriately, a lack of attention to detail in the carpet fitting aspect. For one, where’s the carpet? The two teams arrive in vans but the backs are clearly not long enough to actually store the carpet and there’s nothing on top of them either. Chris and Tasha also only bring one toolbox and I’m pretty sure it doubles as Colin and Dean’s toolbox later (haha). Little things like that aren’t a big deal in the greater scheme of it but they do help set the scene better. Johnston’s character Edward wields a crossbow and likes to shoot it with one hand. Bushe is stretching the credibility a bit with that, especially if we’re led to believe he can aim and fire accurately from that distance. Given the weight of one of those weapons, it seems unlikely. There were a couple of non-sensical decisions made by Colin and Dean that resulted in missed opportunities to fight back. The pair chooses to exit the van rather than attempt to run over Edward, even after they’ve just witnessed him kill one of the others. Later, Dean has a risk free shot at doing something about Mrs. Hanning while she stands above a hole in the floor, yet he chooses not to despite the fact she’s oblivious to him being there. I feel like we’re supposed to care about the plight of the Cupid Carpet members but the film doesn’t really hold any emotional weight, probably due to the mish-mashing of genres (which can be difficult to balance at the best of times). If you combine that with the fact that most of the cannibals are dopey rather than scary, what you’re left with isn’t quite as memorable as one would hope.

In the end, it was well worth O’Donnell and Bushe turning Cannibals And Carpet Fitters into a feature-length film. Tonally it feels like a mix of its English counterparts, “Cockney’s vs Zombies” and Alex Chandon’s “Inbred”. The title is fun and pacing is pretty good. The camera work is sharp, the audio crisp, and sections of the score work really well.  The performances are generally good and the clever writing makes for a nice change of pace for the sub-genre. Horror fans are likely to come hoping for plenty of chaos, and they’ll be glad to know that the blood and gore do flow quite nicely throughout. There are two fairly graphic kills, though a few more wouldn’t have gone astray. I wasn’t a fan of the early zooming, the premise lacks a few particulars, and O’Donnell missed a couple of opportunities for his characters to make decisions that were more feasible than the ones they opted for. It lacks that heavier punch due to its selective tone, but overall genre founds are bound to have plenty of fun with this one and I look forward to seeing what Pretty Dead Pictures do next. Go ahead and check out the official trailer because the film is now available for pre-order on Amazon!

My rating for “Cannibals And Carpet Fitters” is 6.5/10