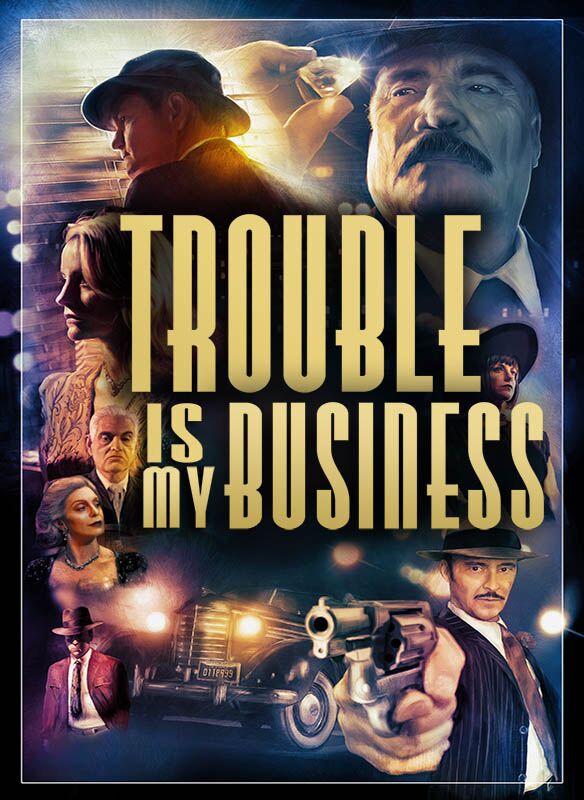 TROUBLE IS MY BUSINESS

Firstly, I’d like to say thank you to Lumen Actus Productions and both Co-Writer/Director, Tom Konkle, and Co-Writer Brittney Powell for sending me an online screener of their latest film “Trouble Is My Business”. Trouble Is My Business is a Film-Noir/Crime film set in Los Angeles in the late 1940’s. Former cop turned private investigator, Roland Drake (played by Konkle himself) has fallen on hard times after backlash from the public, ultimately causing him to be evicted from his office. From there, Drake unknowingly becomes entangled in a web of deceit and betrayal when he takes on a missing persons case involving a woman who he’d previously had relations with. Jennifer Montemar (played by Powell), a wealthy socialite and sister of the woman in question, inquires about his services but all is not as it seems in this world of double-crosses and femme fatales. The film also stars Vernon Wells, David Beeler, Ben Pace, Jordana Capra, Mark Teich, and Steve Tom.

I logged on the other day to find a request from Co-Writer and Actress, Brittney Powell inviting me to watch and review Trouble Is My Business. Shortly thereafter, Tom spoke to me about it as well and I informed him that I had funnily enough just recently purchased a hard copy (which comes complete with both color and black and white versions of the film). I’m a bit of a sucker for film noir and crime films of the era’s gone by. I went on a kick there a while back and purchased a good one hundred or so of the best older crime films (most of which I haven’t even watched yet). It’s clear that Konkle and Powell are both film noir fans too, and perhaps this is their independent venture aiming to serve as a love letter to the genre. The script has all the essentials of the genre, private investigators, corrupt cops, femme fatales and a rare diamond thrown in just for good measure. DP duo, Jesse Arnold and PJ Gaynard achieve quite a simple but clean look with their photography style. Everything is nicely framed and the establishing shots (often conceived with CG) feel diverse and as though they fit well. I’m interested in going back to watch the color version at some point but I was advised to watch the black and white edition (which I’d usually do anyway). Sections of the nearly all CG backgrounds look rather impressive, most notably the driving sequences with Drake and his old partner, Lew (played by Beeler). In addition, the audio track is nice and clear as well.

Thomas Chase and Hayden Clement’s original score is another solid aspect of Konkle’s film. There’s a moody orchestral score in the beginning and plenty of effective french horn and clarinet (or at least what sounds like those two instruments) used in between pauses and moments of dramatic emphasis. The costume and wardrobe design isn’t bad considering the limited funds that would’ve been allocated for it. Tom has a good voice for narration and there’s some enjoyable stuff on display over the course of the film. Though who he’s actually narrating the events to, I don’t know? Most of the performances are serviceable and hit the appropriate beats that best fit the film noir bill. Tom carries a good portion of it and Powell complements him nicely. Both Beeler and Pace, who plays John, Jennifer’s beau (of sorts), provide a clean smart-alec sense of humor to the proceedings. Jordana Capra presents with a natural and well-rehearsed mannerly front as Evelyn Montemar, head of the rich family at the center of the case. Rivers the butler (Teich) is lively, but the characters motivations make very little sense (unless I missed something). A special mention goes to Steve Tom in his small role, and for pulling off a thick and believable Russian accent, no easy thing to do. There are a few moments of decent gunplay and action in Trouble Is My Business but it’s not the prime focus.

There’s the odd bad shadow here and there but the film’s technical aspects can’t be faulted, and that’s an impressive feat in an of itself, especially on this kind of budget. The two biggest issues with Trouble Is My Business are its lengthy runtime and the overall slower pacing of it. Now, that wouldn’t be so much of a problem if the film had more on-screen action or even extra active content, but it doesn’t. There aren’t a whole lot of altercations that occur during the near 110 minutes and that’s a problem. Some of the dialogue feels a little stiff, especially when it comes to Wells character, Detective Barry Tate. Vernon is an Aussie born actor that’s made a solid living for himself in the US, and he’s a guy I usually like watching. Unfortunately, I can’t say that about his performance in Konkle’s latest film (for which he was given top billing). I couldn’t tell what his intended accent was, whatever it may have been though ended up feeling inconsistent and at times noncommittal. Even Well’s off-screen delivery was lacking, and in turn, the appropriate demanding nature of the character doesn’t really translate. A couple of scenes didn’t quite work tonally speaking. The obvious one coming early on between Drake and Jennifer, who have just met, and have to deal with an office intruder in a rather odd altercation. I’m not sure if it was supposed to be funny or if the intended emotional hint just didn’t fit. I thought Drake’s reaction to the situation was rather unrealistic too. There are other examples of characters lacking the appropriate reactions, such as Jennifer pointing a gun at Drake, who gives absolutely no response, yet he doesn’t know her at that point so you’d think he might have some questions. Credibility has to be called into question when the pair overpower three Russian guards, and what the hell was going on with Rivers? Why was he acting crazy? Did I miss something there?

I was looking forward to checking out Trouble Is My Business and I ended up getting to it much sooner than I probably would’ve had Tom and Brittney not inquired about a review. The film is an earnest throwback to the likes of film noir gems like “The Big Sleep” and “The Maltese Falcon”, with perhaps a modern-day touch of something like “Give ’em Hell Malone”. The camera work is great, the audio is sharp and the atmospheric music completes the desired foundation of a genre film like this. Some of the CG is high quality and the costumes are nicely detailed too. The performances are mostly consistent and the script is satisfactorily written. What’s missing though is that important layer of action to help keep viewers intrigued. I’m aware that mightn’t have been the initial intention, but it needed to be. Two hours (or thereabouts) on little money is a long time to try to keep people entertained. Wells performance falls on the disappointing side, some characters actions and reactions don’t always appear to make a lot of sense, and the sluggish pacing makes it a bit of a battle along the way. That said, down the track, I’m still interested in watching the color version and seeing if I gain anything new from it. Whilst I can’t recommend it to everyone, I do think hardcore fans of the film noir style should give this sincere endeavor a look, and keep doing your part to support independent film. You can check out the official trailer below and the film is now available for purchase!