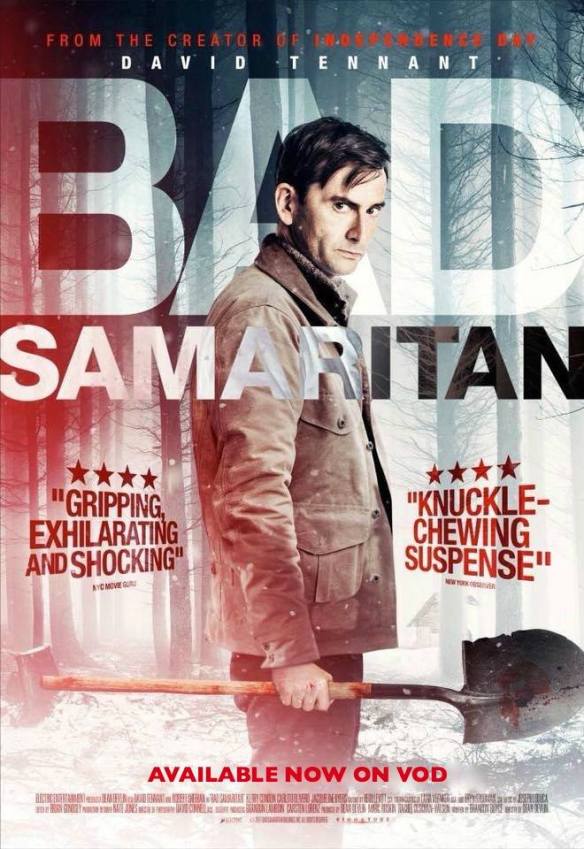 Electric Entertainment presents “Bad Samaritan”, a new Horror/Thriller that’s just hit VOD (video on demand). It’s the latest film from actor turned director, Dean Devlin (Geostorm) and is written by Brandon Boyce (Apt Pupil). Bad Samaritan centers around Sean Falco (played by Irish actor, Robert Sheehan), a young man living in Portland who’s been floating through life hoping that his passion for freelance photography takes him somewhere. Whilst Sean moonlights as a valet at a restaurant, his girlfriend Riley (Jacqueline Byers) is studying to get her degree. With parents constantly on him about growing up and taking responsibility, Sean ends up resorting to petty crime to support his leisurely lifestyle. Along with longtime friend Derek (Carlito Olivero), the pair gets in over their heads when they decide to target Cale (played by David Tennant), a wealthy man whom Sean discovers has been keeping a dark secret inside his home. The film also stars Kerry Condon (TV’S Better Call Saul), Rob Nagle (Dawsons Creek), Lorraine Bahr and Tracey Heggins.

Bad Samaritan is the latest entry in a slew of recent home invasion-style thrillers. This particular sub-genre has found itself somewhat rejuvenated of late, and that’s a good thing for fans of the PG-13 style content. Devlin’s film boasts some of our very own homegrown talent in the form of Australian DP, David Connell (TV’S Leverage). His cinematography is a big part of what drives the high production value of the film. All the framing is consistent and the shot types are smart and simple. There are a number of particularly effective POV (point of view) shots, as Sean carefully explores Cale’s rather lavish house looking for things of easy access. One of the central locations is the home itself, and it’s a great one. It has the look of a new age apartment, complete with a wood look finish, an open plan staircase, lots of glass paneling, and large entertaining areas. Connell’s able to light and shoot each of those internal scenes perfectly, knowing where to darken the frame and how much to keep front and center. Some of the crew were credited for additional audio work, but as far as I could tell, the track sounded clean and natural. Composer, Joseph LoDuca (The Evil Dead Franchise) has almost 40 years worth of experience, and it shows with the class of score he developed here. After working with Sam Raimi back in 81′ (on his first picture none the less), LoDuca continued on in horror for several years before eventually getting a gig on “Hercules”, and thus began a lifetime of composing for the Action/Adventure genre. This particular score triumphs with deep and brooding violin and cello that plays throughout the more intense moments.

Boyce’s screenplay does call to mind other similar thrillers, but it doesn’t make the film any less enjoyable. He’s able to bring about a certain amount of suspense through purely just placing you in Sean’s shoes. Ultimately Sean’s a nice guy, relatable and respectful. Well, as much as one can be while they’re doing some pretty questionable things. We’ve all done it hard at some stage throughout our lives, or let someone we care about down, and that’s what keeps you connected to this grounded and flawed character. The strongest scenes are those in which Sean and Cale almost cross wires but they don’t. The acting is reliable right across the board too. Tennant and Sheehan both leading from the front. Unlike some, I didn’t go into the film with pre-conceived notions of David (having not watched his infamous role on Dr. Who), in fact, I’m not entirely sure that I’d ever seen a film that he was in prior. The multitude of mannerisms Tennant seems to be able to throw out are reminiscent of someone like Pat Healy (Cheap Thrills and Carnage Park). Olivero’s lighthearted take on Derek makes for the logical ying to Sheehan’s yang, and Byers serves as the innocence throughout the whole thing. Kerry Condon’s role is mostly one that requires an emotional display and she does it quite well. Bad Samaritan doesn’t have a whole lot of action, at least not until the final act, but the evolution of the story is still entertaining.

Without spoiling anything, I’d say Bad Samaritan puts a nice spin on its home invasion facet, but if you’re a seasoned watcher then there’s a chance that you might have still seen it all before. The film feels like a descendant of something like “Disturbia” or Fede Alvarez’s white-knuckler, “Don’t Breathe”, only not quite as extravagant. It’s not exactly original, so if you’re one of those movie-goers who’s bothered by that element, your overall enjoyment of it might be limited. The very opening scene feels like something out of a western and it makes for an odd introduction. It has absolutely no context until the latter part of the film, and what’s even worse is that it misdirects you into thinking its somehow relevant to Sean, seeing as shortly thereafter he awakens from a sleep rather unsettled. It’s a small thing but Derek’s constant use of the word “dog” or “dawg” (as it’s known) while referring to Sean, started getting on my nerves after a while. There are a few of those obvious plot holes that usually come complimentary with this type of film. The one that always irks me is when a particular character (in this case Sean) discovers something huge going on but fails to tell a key player about it when given the opportunity to do so. Hell, not even a key player, I’d settle for just anyone, tell anyone! Sean should tell Derek exactly what he’s uncovered, but he doesn’t. Boyce saves face somewhat with that piece of writing though because Sean is able to divulge the information in the next scene (but that’s not always going to be the case in films). We’re not told in as many words, but it’s safe to assume that Cale is some kind of high tech designer, and even safer to wager that he ain’t short of a dollar. Even knowing that though, I still question the credibility of the lengths he goes to regarding his home and Sean. The biggest question of them all though is why would Cale enter the address of his isolated cabin into a GPS? Wouldn’t he already know where it was? And wouldn’t you question the risks if someone gets wind of that location? For a guy who’s clearly smart and doesn’t leave traces, Cales actions weren’t and traces were left.

Despite its lack of originality, Bad Samaritan makes for highly entertaining home invasion viewing. Boyce’s script is mostly solid and Devlin’s directing is formidable. The cinematography is high class and suspenseful, the audio work is crisp, and the low-toned score is rather atmospheric. The characters are sufficiently watchable and the acting is strong all around, with both leads delivering authentic American accents. It was my introduction to Scottish born, David Tennant and I’d love to see him taking on some more darker roles like this moving forward. Being Irish, Robert Sheehan also brings something fresh to the production, and the remainder of the cast is good too. The runtime is perhaps a fraction long and the opening scene wasn’t necessary. Not all of the dialogue phrasings worked and the film is guilty of having characters carrying out actions that weren’t all that believable. Plot holes vary from nitpicky status to fairly sizeable, but nothing that can take away a couple of hours of time well spent. I can definitely recommend Bad Samaritan to fans of Suspense/Thrillers. It’s currently playing on VOD and you can purchase the film on DVD and Blu Ray. Check out the official trailer below!