This is a review for the debut feature-length film from Nail Driver Productions, “Anonymous 616”, Written and Directed by Mike Boss. Anonymous 616 is a confined Horror/Thriller about two couples reuniting with each other for the first time in over a year. Wealthy businessman, Eric (David Abramsky) and his European partner, Monica (played by first timer Lena Roma) have just moved into their new home when they play host to Eric’s long time friend, Jason (Daniel Felix de Weldon) and his girlfriend, Jenna (played by Jessica Boss). What begins as a casual storytelling night among friends, suddenly takes a turn for the worse when one of the foursome begins being groomed by an anonymous person online to unleash their true destructive nature on the group. The film also stars Bella Shepard, Myles Cranford and Emily Jordan.

Anonymous 616 is a nicely presented feature-length film, built around a one location setting and a pretty well written script that deals with ones psyche. DP, Peter Fuhrman (whose worked on films like “Intruder” and the “Cabin Fever” remake) is a handy inclusion to the crew. Everything is neatly framed and really well shot using a combination of sliders, macro focusing and tripod shots. The audio track is consistently clear, and Lucas Tuttle’s score utilizing warping bass and some unique sounds, modestly drifts along in the background. There’s a composition in the opening act adopting some light guitar work and cello to give the undertow a military feeling that complements Jason’s background. Boss does a number of unprecedented things with the script, the most noticeable being a surprise role reversal in regard to the two male leads, Eric and Jason. There’s a common and predictable thread in introducing two characters with the outward appearance these two have that make you think you know the dynamics of their arc, such is not the case with Anonymous 616. A majority of the dialogue and discussion around themes like religious ideology and personal identity comes across quite natural and the film raises relevant points without forcing them down your throat. Boss has plenty to say about false ideology and how we’re ultimately shaped by our varying socioeconomic positions. We place importance on different things, we evolve differently, and the things that drive us are often worlds apart from one another. 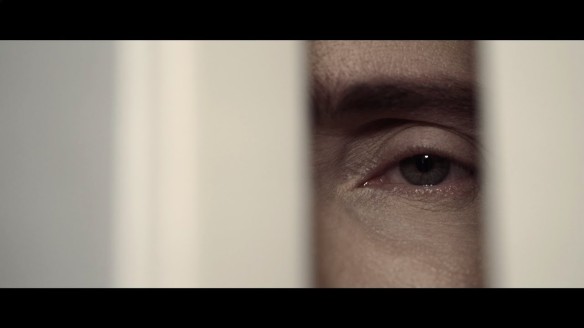 There’s a number of great scenes in the film but there’s one in particular that’s bound to make viewers uncomfortable. There’s an interaction between Jason and Emily (Shepard), the young daughter of Monica, and it’s handled in such a tasteful manner (given the tone) all the while still getting under your skin in the dirtiest of ways. Each of the core performances are good in their own right. Weldon (who bares a striking resemblance to a young Eddie Marsan, fellow actor) is given the most amount of screen time and handles the material and character quirks quite well. Roma has a certain elegance about her and she presents nicely given this is her first time in front of the camera. At times Abramsky and Boss are a little off the pace when it comes to matching the emotional intensity of their respective characters actions. It’s not to say the performances aren’t solid, they just waver a little on occasion, whereas Weldon doesn’t. Myles Cranford has popped up in a few things I’ve watched over the last couple of years and his brief screen time here, playing a pastor, is certainly memorable. Anonymous 616 is surprisingly violent, albeit in patches. There’s some early blood and gore on display in the first act and a number of gory practical effects shown in aftermath shots through the second and third acts. Despite a little confusion at the closing of the film, I followed the general story arc the way I think it was intended to be read.

As I mentioned earlier, Jessica and David’s emotional displays fluctuate somewhat through the middle of the film. His desperation isn’t quite at the level and her crying is intermittent. There’s a couple of creative choices that I had difficulty believing, namely the casting of young Bella Shepard as Emily. Eric reference’s Emily early on in conversation, telling Jason and Jenna that she’s twelve years old. She appears shortly after and looked to be considerably older than twelve years of age (apologies if I’m mistaken there). There’s also a few not so subtle hints at a hinge or two being loose e.g, conveniently placed tools in the family room when Eric isn’t a tradesman. Not long ago, a friend of mine was complaining about the recent spate of films where writers have chosen to reveal details of the climax of their film at the beginning instead of the end, and I tend to agree. It’s a matter of knowing when that can work to your advantage and when it might not. I saw a few of the specifics and the psyche angle of Anonymous 616 coming well before the inevitable unveiling, simply because too much information was given away in those opening scenes. Some of the script’s general “bro”, “dude” dialogue is rather unimaginative. It’s the type of phrasing that’s geared more for acquaintances touching base and not best of friends getting together with their respective partners for an adult reunion. There’s a couple of lines that could’ve been reshaped, such as “His face was gone” in replace of “His face was blown off”. Profanity wise, the film is pretty clean until things become a little forced when the situation mounts. Some of that’s down to the sudden change in personalities (one in particular) ultimately caused by the anonymous person. The conversation around DMT was completely lost on me. This isn’t the first film to raise the topic of drug use and I’m well aware that it won’t be that last, but anytime there’s an overall justification for drug use or hallucinogen’s I simply just can’t relate. I’ve never dabbled with drugs and I can’t fathom why anyone would want to either. By their own design they’re almost always inherently bad, that much I do know.

I saw Anonymous 616 getting some good press through DreadCentral and various other horror outlets and thought I best chase it up. Boss has created an intriguing web of mystery with minimal players and a modest budget garnering a high production value. His first feature-length film reminds me of a better presented and more psychological take on something like “Capture Kill Release”, or even David Palamaro’s “Murder Made Easy” https://adamthemoviegod.com/2017/11/27/murder-made-easy-review/. Fuhrman’s camera work is polished, Tuttle’s score builds an appropriate sense of urgency and most of the acting is pretty consistent. Mike takes a fresh approach with the script, introducing a role reversal among the males and broaching some important topical issues. The god content, the need for power and the differences from culture to culture are just some of the things on the table in this one. There’s some lighter moments, some darker ideas and a surprising amount of violence. On the other side of the coin, Boss gives the audience a little too much rope in the opening sequence, in turn making the film slightly more predictable than perhaps first thought. The casting of Shepard seems like a stretch, and not all of the back and forth between Jason and Eric is as maturely written as the rest of the script. The conversation around drugs and tripping was completely lost on me and a few of the plot devices were a little too convenient. Be that as it may, Anonymous 616 has its own spin on the material and the end result is a great little independent film from Nail Driver Productions. I look forward to seeing what Boss and Co do next! If you’re in the US, the film is currently available on Amazon Prime and stay tuned for the release on Google Plus and iTunes soon. You can watch the trailer below!