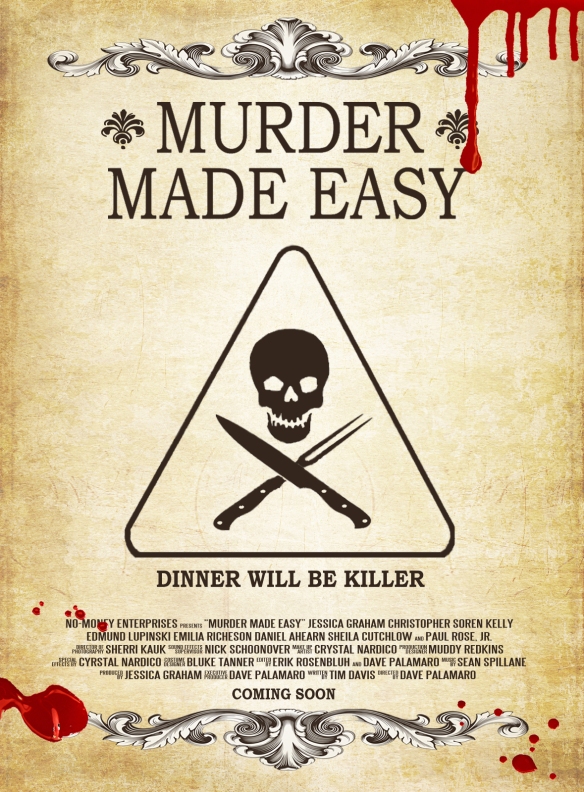 Firstly, I’d just like to say thank you to Lock and Key Films and Director, Dave Palamaro for allowing me early access to an online screener of the Mystery/Thriller film “Murder Made Easy”, Written by Tim Davis. Murder Made Easy is an Agatha Christie meets Hitchcockian style, murder mystery about two friends, Michael and Joan (played by Christopher Soren Kelly and Jessica Graham) who have chosen the anniversary of Joan’s late husband, Neil to invite dinner guests over. One by one different agendas begin to surface, and with this many people murder is sure to ensue. The film also stars Edmund Lupinski, Emilia Richeson, Daniel Ahearn, Sheila Cutchlow and Paul Rose Jr.

Murder Made Easy is Palamaro’s directorial debut. He was kind enough to reach out via the website and request that I check the film out, stamping it as Hitchcock’s, “Rope” meets Christie’s, “Murder On The Orient Express” (which I recently saw the remake of). So naturally, having enjoyed both of those films I was intrigued. The murder mystery sub-genre made famous of course by Alfred Hitchcock, is not so common these days, probably because one is almost always measured against the master of suspense. Murder Made Easy runs just a speedy 75 minutes, but for a one location setting and a small cast, its ample long enough. I’ve seen an abundance of these types of films now, so it’s hard not to notice similarities in individual scenes, tones and the direction. I felt there was a little film noir like freshness about Tim Davis’s screenplay. Davis and Palamaro aren’t shy about openly referencing the struggles independent film makers go through, as well as the trivial nature of things like wealth and popularity. There’s shades of 2002’s “Taboo” (an underrated hidden gem despite two poor performances) about Murder Made Easy, and even a hint of the independent film “Treachery” with Michael Biehn and Sarah Butler. To delve too much into Murder Made Easy would be doing a disservice to the filmmakers and my readers. Needless to say, the film heads in an interesting and unforeseen direction and you’ll want to check it out. 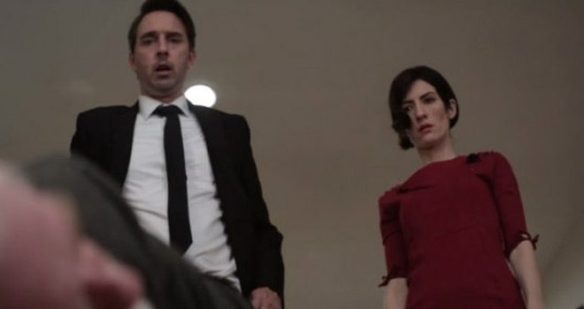 The title credits to Murder Made Easy are in wide print writing in blue font, also presented in Hitchcock esq fashion. Sherri Kauk’s cinematography is quite basic, though nicely exhibited. Opting for plenty of handheld shots and limited movement rather than the conventional cinematic approach. All of the framing is solid and I particularly like the sequence of shots during the time-lapse sequence where Michael and Joan eat their first course of the night. The audio track is great and everything is sufficiently lit too. Sean Spillane’s score is another aspect of Murder Made Easy I thoroughly enjoyed. Spillane previously composed solid themes for “Jug Face” and “The Woman”, both of which were films deeply seated in the Horror genre, so it was interesting to hear his work in this particular style of film. There’s an absorbing bass and xylophone theme that got me hooked in the beginning, later, Spillane introduces smooth jazz (something suited to a nice anniversary dinner) and a suspenseful three note cello and violin motif. A lot of Davis’s script is surprisingly witty and funny, each of the actors having a good sense of timing and delivering consistent performances. Backhanded comments and compliments are where the wit of the piece lie, it’s the special of the day if you will. Without divulging too much, across the course of the night four of the twosome’s mutual friends arrive for dinner (each seemingly connected to Joan’s late husband). College professor and part-time actor, Marcus (played by Lupinski), Vegan and self-proclaimed medium, Cricket (Richeson), Broke Indie film maker, Damien (Ahearn) and self-absorbed best-selling author, Angela (Sheila Cutchlow). Each have their own unique story to tell and do so in varying manners, some more entertaining than others.

A handful of things could’ve been tightened up to make Murder Made Easy an even better film than it is. There’s a seemingly inconsequential intermission that runs for a couple of minutes two-thirds of the way through the film. Other than perhaps hinting at a sign of things to come (if you can make it out), it wasn’t required considering how the film actually wraps. A couple of character interactions run slightly longer than needed as well, most notably with Cricket (mostly because she’s the type of character you can only deal with in small doses). In my attempt to avoid spoiler territory, I’ll just say that I found the final action sequence lacked clear continuity in relation to the angle it was shot from and the culmination of said action. I touched on it earlier but my personal preference for presentation is via a more cinematic approach, regardless of the genre and setting. I’d loved to have seen Kauk employ a few dolly shots, maybe even some macros to highlight a few of the items in question throughout the course of the film (just a thought). While each of the performances were fine, the characters of Marcus and Cricket were neither here nor there for mine. Lupinski’s well to do dialogue delivery is clearly supposed to be an extension of Marcus’s theatrical nature, that’s fine, I just personally wasn’t a fan of it. With Cricket, it didn’t help that Emilia’s tone and performance style reminded me a lot of fellow actress, Leslie Mann (who in my opinion is one of the least funny women in Hollywood). The saving grace here is that Richeson actually has comedic timing, and shows it in spades. The “No, I’m a Sagittarius line” was a lot funnier than it probably had the right to be. The séance scene was where things went too far though and the performance got a little silly and somewhat annoying. The storyteller in me understands the need to depict her as being off in her own little world, but you don’t want to test your audience. In the end it’s simply down to personal preference I suppose.

David Palamaro couldn’t have chosen a better first screenplay to direct and Tim Davis (also with his first attempt) virtually couldn’t have written a better one. After watching Murder Made Easy come full circle, I feel like it should be drawing comparisons to films like Sidney Lumet’s “Deathtrap” and in a big way the aforementioned, “Taboo”, more so than “Clue” or the works of Hitchcock. One can’t deny the similarities to those past genre films, but what I do like is the infusion of some interesting themes. Even in its farfetched nature, Davis highlights struggles that we can all relate to when it comes to interacting with people who are very different to us. How human characteristics factor into the equation. Murder Made Easy has a quick run time, plenty of twists and turns and indie film fans will love Davis’s self-deprecating humor when it comes to the actual film making process. Cleverly highlighting such material through the character of Damien. There’s plenty of humor, the performances are consistent and most of the technical aspects are really well conceived. I think Palamaro could have omitted the intermission and cut a couple of overly long dealings down without the film actually losing anything. There were one or two minor continuity issues as well. Unfortunately, both the Marcus and Cricket characters got on my nerves (despite the good performances) and some of the ending reminded me a lot of a particular murder mystery I’ve seen before. Overall though, Murder Made Easy completely took me by surprise and I think genre fans are really going to enjoy this one. Keep an eye out for the official release, you can check out the official trailer below!