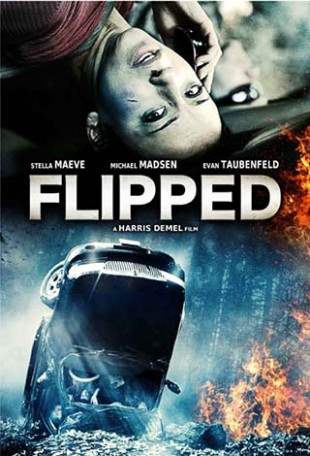 Firstly, I’d just like to say thanks to Clint Morris and Osiris Entertainment for allowing me early access to an online screener of the Drama/Thriller film, “Flipped”. Flipped was Co-written by first timer, Harris Demel (who also directed it) and Rob Greenberg. Flipped is a claustrophobic thriller, centered around Fashion model, Nicole Diamond (played by Chicago P.D’s, Stella Maeve) who finds herself trapped upside down in a car with her boyfriend Scott, after having a serious crash. Nicole’s phone call for assistance takes a dangerous turn, as the man on the other end of the line reveals his own agenda for offering help. The film also stars Michael Madsen.

If the premise of Flipped aka “Blood Rush” sounds like a familiar one, it’s because it is. Adrien Brody played a man in similar dire straits in the 2010 film “Wrecked”, the only real difference between the two being that his character suffered short-term memory loss. Later that same year, Ryan Reynolds portrayed a U.S truck driver in Iraq who becomes trapped in a coffin in “Buried”. We’ve seen plenty of films that involve people trying to overcome adversity in the face of death but none the less, it continues to make for interesting drama and unique situations. By the same token, many of us (fortunately not me) have been in similar circumstances and I think that’s why it often resonates with an audience. Flipped opens by immediately introducing us to Nicole. The sound of an indicator incessantly ticks, as she comes to, realizing that she’s in a tight spot, literally…. She’s trapped in her car. The film hits you with a wonderful opening shot, where the camera gently zooms out to reveal a smokey engine and the vehicle’s hampered position. The credits roll while simultaneously showing recent flashbacks, as we start to gain a brief insight into our trapped celebrity’s current lifestyle. 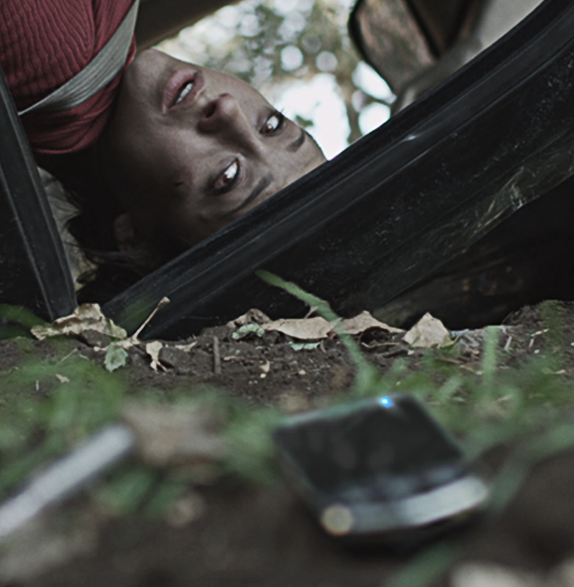 All of the camera work is interesting, they utilize such a wide range of shots with different lenses, doing everything possible to put the viewer in Nicole’s shoes. It’s the opening act though that contains a lot of gorgeous cinematography and sets the entire mood, aesthetically speaking. Given the fact that ninety percent of this film is in one location, the ability to keep audiences engaged in the way this does, deserves plenty of praise. There’s a lot of gentle zooming, in and around the car, through the windows, across the hilly landscape and overall just smooth continuity. The audio levels are consistent and the big orchestral themed score in the beginning was excellent. An overuse of music would’ve detracted from the suspenseful nature of the story development, so they balanced it well. A large team of sound engineers, led by Hayden Clement (who did sound editing on the 1992 Horror film, “Candyman”) composed all that you hear in Flipped. The sound effects are abrupt and worrying and fit with Nicole’s current state of mind (and being). The story moves along nicely and I enjoyed the inclusion of some wild life, just to make the scenario that bit more intense. I’d like to know whether that organism (for lack of a better term without spoiling) was real or manufactured, kudos to Stella if it was.. eh yuck!

The film is paced quite cleverly. Demel and Greenberg give you just enough to make you think you see the direction they’re taking but you’re never completely sure. If you read body language the way I do, you’ll probably notice a few things about Nicole and be able to read between the lines (especially in the beginning). The great thing however, is that there’s more to the story than meets the eye. Dare I say it, Stella does a stellar job as Nicole Diamond (see what I did there). Her character runs the gauntlet of emotions in this 87 minutes and she handles most, if not all of it superbly. Both Harris and Rob wrote a strong and back able character, who you really want to know more about and hope to see prevail. I actually remember seeing Maeve in a made for TV movie called “Accused at 17” but now that I’ve got the first season of Chicago P.D, I’m looking forward to seeing her in that. The man on the other end of the phone is played by none other than experienced actor, Michael Madsen (Reservoir Dogs and The Hateful Eight) *see my review here https://adamthemoviegod.com/the-hateful-eight-review/. I’m a huge fan of Michael’s and I dug him in this type of role. The layers of his mysterious nature are slowly peeled back and carefully laid bare. This is Madsen like you’ve never seen before (literally). He’s got that calm, yet controlling voice and ultimately they couldn’t have cast a better guy. I’m still undecided on how I feel about the final moments of the film, it’s interesting I’ll say that much. What I did like though was the message of empowerment. For those who’ve experienced such things (or any number of challenges for that matter) to stand up and fight for what you deserve etc makes for a great takeaway.

My first criticism isn’t directed toward the movie, it’s actually directed at Osiris Entertainment (gutsy I know, given they sent me a screener). I understand they have legal obligations and copyright disclaimers etc that’s fine, especially when sending out screeners, but a watermark appearing on and off would have sufficed. The Osiris emblem was planted (in wide writing might I add) across the screen, for the entire duration of the film which makes it difficult to look at everything in the frame and critique the film properly. As previously stated, aspects of the film were a little predictable. I was able to anticipate a few of the minor plot points surrounding Nicole’s personality and justifications. I thought in the beginning there was a lack of attention to detail in Nicole and Scott’s makeup. One would assume if they had totaled the car and flipped it, the results might have been a bit more extreme than just a scratch on the face or a bruise or two. Most of the minor issues lie in the stages of Nicole’s thought process. It takes her longer than it should to remember she has her phone and that she should start making calls. Not to mention the fact that she calls her mother (I think?) doesn’t get an answer the first time and then never tries again. Her choice to dial random numbers in her area code, hoping to just get a random strangers help seemed rather odd. I can’t really discuss the finer points about the likelihood of dialing this certain type of person, or getting yourself into that type of argument etc, without spoiling the movie. The other noticeably weak thing was a bunch of leaves that had caught fire (in the way of some bad CG) and blown into Nicole’s path.

Flipped is a very solid and enjoyable mix of Drama and Psychological Thriller. As a first time Writer/Director, Harris Demel has constructed an intriguing and tight film with a pertinent message about individuality and inner strength. The casting and performances are great, the production value through glorious cinematography, elevates the entire film. A nice big score and smartly introduced sound effects, top off what is a technically polished product. My only gripes were to do with the order of Nicole’s process and maybe a bit of the urgency of it (or lack there of to be more accurate). There’s some predictable early warning signs and some of Madsen’s dialogue felt a touch out of character. Other than that, you’ll find it hard to fault Flipped. If you’re looking for a great psychological survival story, I can’t recommend this one enough. Flipped supersedes both Buried and Wrecked in just about every facet of film making and I can’t wait to see this again, preferably without the giant distributor watermark.