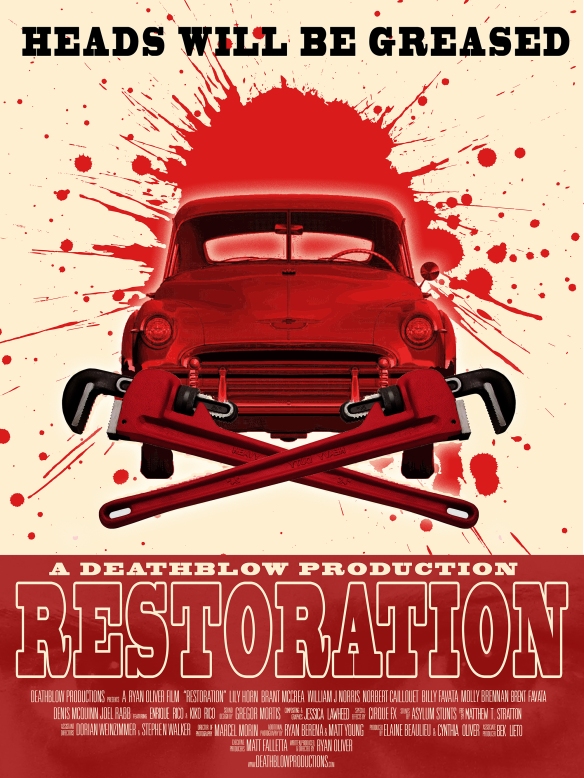 Firstly I’d just like to say thank you to Writer and Director, Ryan Oliver for allowing me access to an online screener of his 47 minute, Horror film “Restoration”. One day while playing hide and seek in the countryside, Yvonne LeMay (played by Lily Horn) gets stuck in the trunk of a 1950 Fleetline Deluxe. Over 50 years later Sonny Ray, a rev head (Brant McCrea) spots the car for sale in a newspaper ad. Shortly after the car changes ownership, it’s relocated to a mechanics clubhouse/workshop. Little do the employees of the workshop know Yvonne’s spirit still remains inside the classic car and she’s little to happy with the change in location. The film also stars Billy Favata, Norbert Caillouet, William J. Norris and Molly Brenan. Not only is the first time I’ve seen any of Ryan’s work it’s also the first “half film” I’ve seen. 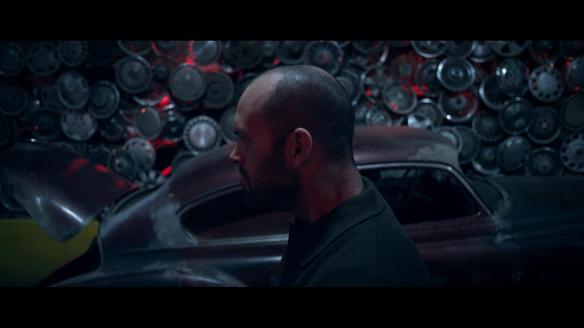 The poster was the first thing that caught my eye. I saw the tagline on a flyer for the film festival this was showing at and that’s how I ended up getting in touch with Ryan. Clearly inspired by the likes of Stephen King’s “Christine” as well as any of the modern “Paranormal” based genre films, Restoration supplies us with a fresh take on the supernatural spirit. It takes a similar setup and a few cues from King’s, 80’s Thriller while at the same time mixing an entertaining new blend of sub-genres. What if the once fancy car you bought for a steel wasn’t the thing haunting you, but instead the restless remains of a young girl. The film opens with some exquisite black and white photography. An entire  sequence of wonderfully presented cinematography, by Marcel Morin starts things off on the best possible note. The barn/shed and vast corn fields are the ideal location to set up a tragic set of circumstances. Those settings and the opening suspense score can be compared to that of M. Night Shyamalan’s “Signs” (a personal favorite).

All of the camera work is handled meticulously. The panning is perfectly implemented in crucial scenes and it’s impeccably smooth in transitioning. I was thoroughly impressed by all the camera movements and after finding out the budget was estimated at only $10,000, even more stunned with the results. The careful use of wide shots are as good as any mainstream film and all the framing in regards to the actors/actresses is excellent too. Ryan and his crew really know their craft and it makes for an incredibly easy watch, you might say somewhat of a rarity in low-budget film making. The sequencing of events is straight forward and the editing is neat. Several scenes have slow motion included in them and for the most part they work. There’s a haunting buildup showing the rundown vehicle, wasting away under shrubbery on the gorgeous property of Leander Humes (William J. Norris). Majority of the story takes place at night, so I was pleased to see it sufficiently lit for most of the scenes inside the workshop. There’s a striking, red tinge reflecting off the walls during the Action scenes that were a nice addition.

I figured the music was going to be a standout feature, given the opening credits sequence displays a retro jukebox playing 50’s tunes. The suspenseful score was quite plain but Oliver makes up for that with some cool period music and the casting of some “Rockabilly” extras in a party scene. The pacing of the film works, I think if this had have been 90 minutes it would’ve fell victim to the same trappings of every other film in the genre. Most of the deaths are brief or shown in slow motion, all but one are pretty stock standard but at least there’s on-screen kills. Taking into account the small budget here, you’ve got to respect all the effects which were done practically. Those of you who’ve seen it will agree that the last death takes the cake. It’s extremely inventive and completely brutal and although you see it coming, what ends up on the screen isn’t at all what you’d expect and I loved that!

It could just be due to my computer speakers but some of the dialogue levels were a bit uneven. I could understand all of it but some scenes were louder than others. For the most part the stylized, slow motion sequences work but at times they’re still somewhat overused. I was looking forward to seeing some of the action play out in real-time, I think it would’ve had more of an impact. Most of the scenes aided as a catalyst to the escalating threat of Yvonne, but one in particular involving some idle chit-chat between gear heads at the workshop, could have been cut. Speaking of Yvonne, her makeup looked great but the suspense surrounding the character gets stifled early on. She’s revealed to the audience as the presence in the vehicle almost immediately. I know this only runs for half the length of a feature film but it may have benefited from a slower build up, and by not showing the audience everything in the opening act. The motive behind her explosive behavior is a little thin, given that half a century earlier none of the characters were even alive. Revenge is always the most logical plot point though and it’s a horror film so I digress.

With its exceptional production value and thoroughly entertaining fusion of genres, Restoration was a blast from start to finish. Ryan’s expansion and take on a similar idea to “Christine” made for a great little premise. The multiple locations, beautiful black and white photography and concise camera work are of the highest standard. Every frame of this film is simply superb and on top of that, the lighting is atmospheric and the 50’s inspired music coming through that eye-catching, jukebox is great as well. The action sequences were solid, one in particular was extremely well executed and gory as hell. The only issues lie with some minor audio inconsistencies and a slight excess in slow motion frames. There’s lapses in building the tension and a fairly predictable motive but that’s nothing to get hung up on. Restoration is a must see especially for all Horror fans and I highly doubt considering the budget, you’re going to see a film this good again for a while. Keep an eye out for the release its on its way soon!