Firstly I’d just like to say thanks to Writer/Director, Dave Parker for allowing me access to an online screener of his debut, feature-length film “Slimy Little Bastards”. I’ve been a subscriber of Dave’s YouTube channel for a while now so I was pretty stoked when I heard he was going to try his hand at shooting a film. Slimy Little Bastards grounds itself in modern Horror/Comedy but at the same time, it’s a love letter to the micro-budget creature features of the past. It’s a 66 minute film containing three different segments and a wrap around, each involving a different type of gooey monster. The wrap around sees Jack Barson (played by Keith Voigt Jr) having car troubles and deciding to ask a nearby neighbor (Brandon Salkil) for assistance. He’s invited into the strangers house and told of three different tales involving a mysterious gooey substance. The first story involves a Gaunt man who lives alone, he discovers a substance that he thinks stems from a maintenance problem. After a quick inspection things escalate from bad to worse. In the second part of the film, Sandy Calvin (Erin R. Ryan) is suffering from anxiety and depression, circumstances made worse by her overbearing and controlling mother. Dr Lance Archache (Dustin Mills) offers her the chance to trial a supposed miracle drug (a different gooey substance) but it ends up having some unexpected side effects. Lastly, a group of friends get together for their weekly fantasy game. What starts out as some regular down time quickly turns to shit (literally haha). The film also stars Jeremy Ryan, Matthew Hudson, Aaron Anthony and Dave Parker.

Initially I didn’t know that this was Dave Parker’s film, regardless the catchy “Slimy Little Bastards” title made damn sure I wasn’t going to miss this one. It’s a very Roger Corman esq idea and a great setting for a low-budget affair. Now keep in mind, even Corman’s early work had a substantial amount of money behind it. Parker’s first endeavor see’s some of his closest friends come together in order to bring it to life. There’s no doubting that this takes the DIY approach all the way and while that adds a certain charm to the film, it’s not guaranteed to succeed. I’ll admit I’m a sucker for a throwback to the old style b movie, especially the creature orientated ones. Audio levels can be a difficult thing to get right when you’re working with a very small budget. So much to my surprise, the opening segment of dialogue was quite clear and a lot of the sound effects were loud too. The different sounds the monsters made, the squelching of the goo, it was all pretty amusing. The brief shot of miniature Claymation at the beginning of the last segment was a nice little surprise, so kudos to Dave for throwing that in there! 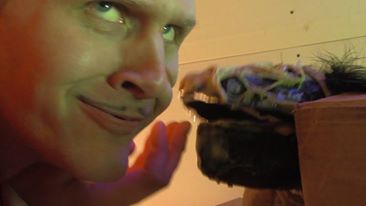 The cast clearly wanted to help out their friend, while at the same time treating this like a bunch of weekend hangouts much like Peter Jackson did with his friends when working on “Bad Taste”. The performances were okay but it’s difficult to judge. Tone wise the movie is rather out there and extravagantly presented. Erin, whose worked with Dave and on several other DMP Productions such as “Applecart” and “Skinless” *see reviews*, turns in the most consistent performance of the bunch. Dustin would probably admit he’s far more suited to being behind the camera than in front of it. He has some decent moments here but most of it feels scripted, the same goes for most of the cast. I’ve enjoyed a bunch of Brandon’s performance but he has that kind of flare that’s better suited to theater performances. I think he’s got plenty of talent but in his role of “The Curator” he seems to exaggerated (probably the intent though) yet in his other appearances offers very little (in part because of the writing). Several of the actors here play multiple parts in the film, much like they did in the aforementioned Applecart. Regardless of performance levels everyone still seems to be having fun and when you’re on such a small film that’s one of the key ingredients.

The two strongest aspects of Slimy Little Bastards lie with the ambitiously homemade, cheesy practical effects and the synth heavy soundtrack. The camera drifts around too much to really see any impact hits during the fight and action choreography, but what we are left with is some glimpses of a pretty blotchy aftermath. The gore is that paint colored red and the monster fluid is clearly made up of a combination of jelly and Coolade, or something to that effect. This kind of resourceful technique can be seen in a lot of low-budget films and you have to admire the work ethic. In this case I was reminded a lot of Richard Mogg’s “Massage Parlor Of Death” *see review*. The standout kill involves a complete smashing, a watery but completely entertaining mess. The glowing highlight in Parker’s first film has to be the music. It’s nice and clear in the mix and combines 80’s synth/pop with the use of a Glam Rock sounding lead guitar, like something you might have heard in a 70’s grindhouse flick, I totally dug it. The last segment shy’s away from those kind of sounds, instead opting for an oriental composition reminiscent of “Big Trouble In Little China”. Many congratulations to all involved with the music, bar some randomly placed Drum and Bass tunage, it’s all pretty great!

I’ll summarize the film first and then break it down into the respective sections. This being a first feature not to mention one on a shoe string budget, it may have benefited from simpler story telling. There’s no even that much of a story here, it’s more that the three segments which feature new characters often played by the same actors, feel drawn out and detached. Maybe the intention was to make a short film but it just happened to grow into something bigger over time, I’m not sure. The only common theme in these sequences are the mysterious goo these slimy little guys leave behind, I don’t even recall any exposition on how this stuff was concocted, if the information was there I must have missed it during all the shenanigans. At one point the substance burns characters, other times people rub it on their skin and begin to hallucinate, as can be seen in the second and third acts. No real rules or back story regarding the sole plot point are ever established. The wraparound was very predictable and only served as a minor introduction, the first and last sequences were definitely the more enjoyable. Most of my gripes about the film are technical based though, some of which can be chalked up to lack of funding, the rest  down to experience.

The issues with the camera work are down to the combination of framing and focusing. There’s a lot of shots that are just ever so slightly out of focus, it could be an equipment or lighting based issue that ends up highlighting it. The framing of Voigt as the Jack Barson character was shot far to closely to the actors face and the same goes for the group of guys at the table towards the end of the film, one of which can even be seen holding back laughter through most of his dialogue. Keep the camera work simple, basic shot choices and clean cuts. If it was just camera movement or imperfections I could handle it but combine those with the quick cuts and abrupt editing, it makes for a difficult watch. There’s several pointless cuts back and forth as the lonesome man waits for the maintenance guy to arrive. Said guy is supposed to be Russian, I’m not sure why Dave opted for that (maybe spice up the character? It only ends up being delivered quite unevenly by Mills). Some of the slow motion and fast editing in the second segment feels like a major shift from its prior course. I’m assuming the sudden jolts and impulsive editing are to depict Sandy’s state of mind but end up coming across as amateurish (but then Parker is an amateur so). Dave records a lot of videos for YouTube though so I was actually surprised the camera work wasn’t of a higher standard, however shooting on a tripod isn’t exactly the same as doing an entire film so I understand that. The dialogue spoken by his mother in the same segment is also too fast and ends up sounding like static. 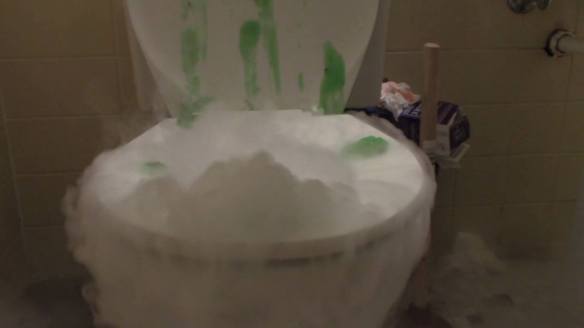 In the end I found very little to like about the second segment, mainly because the technical stuff smothered it completely. The story of a young depressed girl and the opportunity for her to escape her demons is an interesting enough premise, but this time it was the audio hurting it. Throughout the first segment it was pretty smooth but then the dialogue was at a consistently low-level. As things get a little heated a lot of the dialogue starts pitching and peaking all over the place. A character would laugh or raise their voice during an interaction and that shrill sensation is heard and it’s not nice. There’s often background noise in a lot of the scenes but that’s a nit picky thing and par for the course when you don’t have equipment to muffle or edit it. The color grading is inconsistent and the lighting leaves a bit to be desired as well. The color saturation as the hallucinations/out-of-body experiences occur is rather uninspiring but those sorts of things are down to creative license and the filmmakers make those choices for themselves.

Despite its problems Slimy Little Bastards made for a relatively interesting and original watch. Unfortunately it’s bogged down by the usual technical glitches that often accompany the low-budget genre. It’s difficult to be objective when you review an acquaintance or friends work, so I try to approach it almost exactly the same way I would with anything else. First and for most I commend Dave and the entire cast and crew on getting this feature-length film made. It had an estimated budget of just $1,000, yes you heard me correctly. It’s got a cool title and some brief but impressive animation, passable performances and some really ambitious DIY, practical effects. The standout for me though is the original and eclectic score, it’s as good as anything I’ve heard in the genre lately. If a lot or all the technical aspects had have been rectified (whether that be through more time or money) this would have been much easier to watch and an enjoyable romp. Even still, it’s a far better film than others in the genre like “Mutantis” or “Ooga Booga”. I won’t sugarcoat it this film isn’t great but have you ever seen a film made for $1,000 that is? It won’t be for most people but I had a bit of fun with it and if you like and or can appreciate micro-budget films and the work that goes into them you might too. Please support Dave as well as the team at DHP Productions and check this one out.