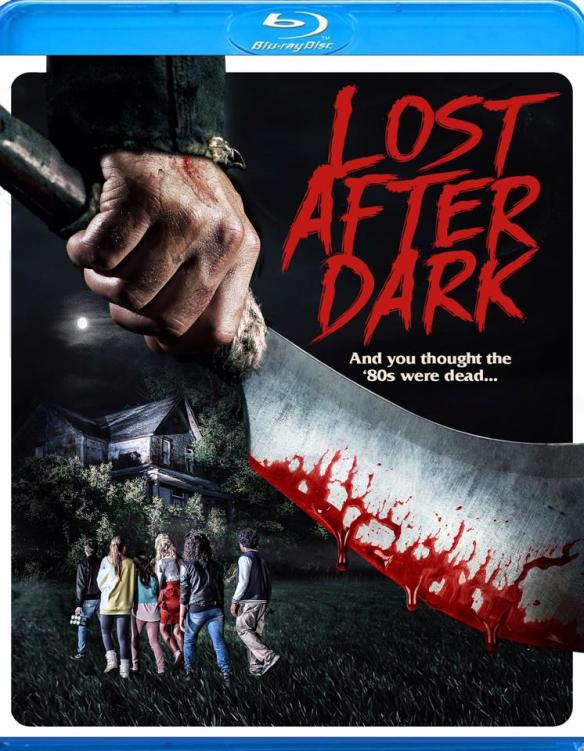 I first heard about Ian Kessner’s, Slasher film “Lost After Dark” about a year ago. It’s a Canadian made film and clearly an homage to slasher films of the 80’s. A group of teenagers decide to borrow a school bus, skip the dance and head to a cabin for a weekend of partying. Their road trip is quickly short-lived after they break down near an old and decrepit farmhouse. They split up into pairs and head out to try to find help, little do they know a cannibalistic madman is lurking nearby hoping to add the kids to his sacrificial shrine. The film stars Jesse Camacho, Kendra Lee Timmins, Elise Gatien, Justin Kelly, Stephan James, Eve Harlow, Lanie McAuley, Alexander Calvert, Mark Wiebe and Robert Patrick.

Kessner’s film definitely isn’t the first modern film heavily inspired by Slasher’s from the 80’s. Sure the teens in the woods, madman on the loose premise is a pretty formulaic one. Saying that, there’s a reason it works. Most fans just want consistency and this familiar concept is nothing if not consistent, the reason we continue watching these types of films is because we know what we’re in for (for the most part). Even though I enjoy that 80’s look and feel, whether it be the clothing or the music maybe even just the nostalgic appeal, I still enjoy watching how far the acting and effects have come these days. Ian’s camera work in Lost After Dark is simple but productive, the shot choices often highlighting the intended 80’s aesthetics. The audio is loud and clear and a majority of the scenes are sufficiently lit. A film entirely set at night, as is this one (for the most part) can be difficult to balance the amount of light you use. Some of the internal shots throughout the second half of the film were quite dark, I would’ve liked to have seen a bit more of the set design because what I did see looked cool.

It’s a rarity to find more than one character to root for in these types of films. The writing often only caters to a specific character you know is probably going to end up at the center of the crisis. Lost After Dark gives us the cliché’s we’ve come to know and love, while at the same time managing to make everyone somewhat likable in their own way. It’s a welcoming nod that the names of the teens here, correlate with different people associated with past films in the genre. Adrienne (played by Timmins), is the play it safe, sweet girl who begrudgingly hosts the weekend getaway in a desperate attempt to fit in with the popular kids namely Sean (Justin Kelly), the guy she has a crush on. Wesley (James), is the more mature of the guys but that’s not saying much. According to the beautiful Jamie (played by Elise Gatien) he’s a bit of a player. Johnny and Heather (played by Alexander Calvert and Lanie McAuley), play the token rich kid with connections and the princess dumb blonde. Rounding out the group are Tobe, the nerdy out of shape stoner (Camacho from the underrated “12 And Holding”) and lastly, Misfit/Rebel Marilyn (played by Eve Harlow from TV’s “The 100”). 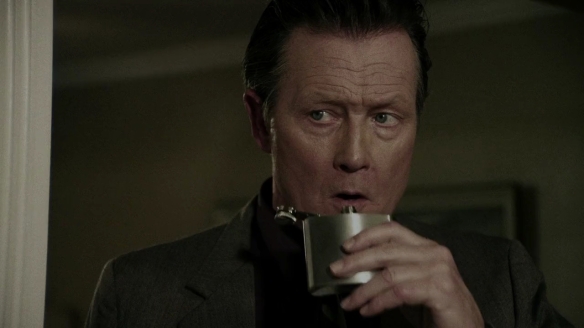 The facet I enjoyed most about this young group of actors/actresses was the natural chemistry they all shared. I know some of them worked together on the TV show “Degrassi”, but they all managed to convey the dynamics of their characters friendships quite well. All the girls respective characters had such different personalities, each likable for different reasons. Majority of the acting feels real, often towing the line between Drama and Comedy, but never takes itself so seriously. Most of the dialogue is well-written, profanity only included where necessary and the films light-hearted moments normally on display at the right time. Ian opts to take the path less traveled where certain revelations are concerned. There were a couple of characters whose arcs contained unique surprises that I definitely didn’t see coming. I thought Tobe (played by Camacho) had the most interesting and entertaining character arc out of all the teens. He delivered some well-timed, comedic relief and acted quite the fool who had a crush on the girl he knows he probably can’t get. For a nerd he’s quite cool, even Marilyn says so. 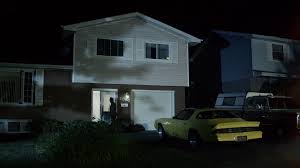 The first part of Lost After Dark rings true to the Slashers of old, by not containing much Action but still getting in a couple of early kills to help set the tone, although one of them is off-screen and the other is fairly generic. As the film progresses, the body count starts to rise and there are some more on-screen deaths, albeit only briefly shown. The effects were done practically and look pretty solid. A couple of the highlights involve a post hole digger and a makeshift wooden weapon. I just want to quickly mention “Terminator 2 Judgement Day’s” Robert Patrick, who plays the war vet/ high school principal Mr Cunningham. He’s a welcomed addition to the cast and he had some fun isolated dialogue, I just wish he had of featured a little more often.

Music is key in most films, even more so when it comes to re-creating the 80’s. We’re talking about a point in time where some of the cheesiest songs, written by one hit wonders found their way to the top of the charts. The soundtrack for Lost After Dark was very disappointing as were the references. There’s only one or two shots showing the kids listening to an old-school, boom box style radio with a cassette player attached. Even then the songs are very low in the audio mix and you can barely make out what’s playing. A couple of passable muted pop songs aren’t enough to satisfy me, this is supposed to be the 80’s, Where’s the synth? You can’t make an 80’s inspired film without synth that would be like pancakes without maple syrup. I could forgive it to some degree if the soundtrack played much more frequently than it does. The sound effects are just as plain as the lack-lustre score. For the most part it’s a generic, low-key violin mixed with your simple three note piano score. It’s only in a few more of the climactic chase scenes that the score manages to rise to the occasion.

The faux, 70’s style grindhouse aesthetics placed throughout certain points of the film are a distraction. The combination of using static blemishes and missing reels feels far more suited to channeling a low-budget, SOV (shot on video) film than it does in this. Most hardcore genre fans will be disappointed in the lack of sex/nudity in Kessner’s film understandably so, personally I wasn’t bothered by it each to his own. Lost After Dark takes its time getting to the good stuff and that can be problematic if that stuff is rather ordinary. The second half of the film contains some fun kills but they’re fleeting, there’s no lingering for suspense, no time spent building any level of fear. Our heavy coat wearing madman has very little that’s distinctive about him, other than a fairly rotten set of teeth. We only know he supposed to intimidate us because he’s big, it’s not because he’s all that menacing. If the “Axeman” killer and Fisherman, Ben Willis from “I Know What You Did Last Summer” had a cousin it’d be Joad.

Even though most of the dialogue does aid in progressing the story, it’s still lacking some much-needed punchy 80’s lingo, especially as far as one liners and comedy go. Several lines of dialogue don’t make sense and should have been re-worded to feel more natural. The film’s opening drops us into the 70’s where we see a girl running away from a madman. Now, in hindsight it’s unnecessary because other than giving the audience a bit of early action and a brief glimpse of the killer, it has no context to the Joad character or anyone else in the film. The main problem is that the back story surrounding Joad (Wiebe) isn’t made known until three-quarters way through the film. The audience has barely seen him, we don’t know what he’s been doing for all these years or if there’s a deeper meaning behind it all, we get next to nothing. It’s an extremely long wait to expose information to the viewer that the group already knows. I think it’s Tobe and Marilyn that see the name on the letterbox as they enter the property, yet no one raises this well-known “campfire” legend until it’s crystal clear they’re in his house and all being hunted. Robert Patrick is by far the most experienced cast member here but he only gets a few short scenes to try to make an impact. He’s shown at one of the kids parent’s houses early on, and then isn’t referenced again until the final act. I don’t like seeing that break in continuity that makes you wonder what a character has done during that chunk of screen time (think of any number of “Pretty Little Liars” episodes where characters disappear for ten episodes at a time and no one questions where the hell they’ve been!).

Every film opens itself up to criticism it’s par for the course, Lost After Dark even more so because it’s aiming to model itself on popular Horror films of the 80’s. After waiting for the film’s release for so long I had high expectations, honestly I felt a little let down once the credits began to roll. It’s clear Ian’s got a sound knowledge of the technical aspects and along with (Co-Writer, Bo Ransdell), the ability to write interesting and likable characters while introducing clever twists audiences are starved for. Despite its slightly off kilter pacing and in my mind lack of true bloodshed, the entertaining group dynamics and the practical effects are reason enough to watch and enjoy this one. Something tells me Kessner’s film probably would have worked just as well, if not better in a modern setting. Taking into account its PG nature, the new age discourse and a lack of focus on creating an 80’s inspired synth pumping soundtrack, Lost After Dark ends up somewhat of a miss. It never truly shines in the Suspense or Horror department. With a combination of convenient background information coming to the surface, entwined with the killers generic look, Joad will simply be remembered as just another cookie cutter killer. On top of it all the ending was rather anti-climactic, but that could be because a sequel is on the cards I’m not sure. If you like to kill some time (pardon the pun), with a modern Slasher film this one is still well worth a look. If you er on the side of caution when it comes to Horror, you’d be safer with the old school classics.

Lost After Dark is available to purchase through Amazon.