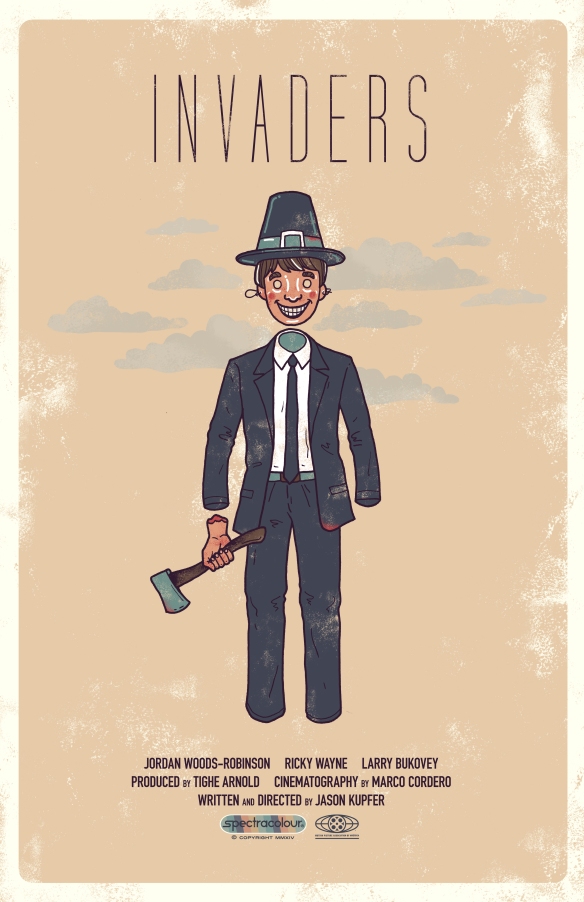 Howdy Pilgrim! I’d just like to say thanks to Writer/Director Jason Kupfer, for allowing me early access to an online screener of his 7 minute, Horror/Comedy short “Invaders”. Prior to entering a wealthy families suburban home, a pair of invaders ponder potential character choices as well as how to proceed with the job. The film stars Ricky Wayne, Jordan Woods-Robinson and Larry Bukovey. I originally stumbled upon a write-up for Invaders and thought it sounded great. I’ve seen my fair share of short films over the last twelve months, most of which have been really polished films so what about Invaders? This is Jason’s third short and it was shot for an estimated budget of $10,000.

The premise of Invaders is an extremely entertaining one. A deliciously dark comedy done in good nature. We all remember “Home Alone’s” Harry and Marv, the simple-minded buddy duo that could never seem to get it together when it came time to get young Kevin. Our driver and passenger in Invaders are very much cut from the same cloth as the aforementioned. Though I felt a hint of John Hughes’s classic film about it, there aren’t any real references in here. However, a couple of other films are mentioned during the opening lines of dialogue so that was a nice touch. All the shot choices are fantastic so kudos go to both Jason and Cinematographer, Marco Cordero. Everything is expertly framed and crisply edited, those specific shots with a gentle zoom help give the viewer a variety of camera activity to look at.

All the audio levels were clear and though the piano score didn’t necessarily fit the tone, it still sounded nice. Invaders is cleverly written. The funny dialogue and timing of delivery from Wayne and Robinson is what really draws you in (as much as one can be in 7 minutes haha). The debate over choice of mask is hilarious, made even funnier by our drivers inability to focus properly on the task at hand. The importance he places on trivial details is entertaining as hell. I’ll quickly mention the splatter inspired, blood and gore which closely resembles Asian cinema like “Tokyo Gore Police” and “Lust Of The Dead”. The last sequence is brilliant and the household owners method of dealing with the situation is golden! This would be as close to a perfect short as you’ll find, if not for the fact that as the credits roll one character remains upright, when it would be scientifically impossible to do so. I know it was probably played for laughs (I mean I laughed), so I’m going to let that one slide. Now you’re probably wondering where is the bad, there’s always bad right?? Not this time, well almost not anyway.

The way in which a certain character meets their demise wasn’t made as clear as it could have been (at least in my opinion). Upon a second viewing though I got a glimpse of what I had missed the first time around.

Invaders is a superb little short, in fact it’s just about the best short I’ve ever seen. The technical aesthetics are brilliant, the dialogue is fresh and the desired intention is clear  from the. The actors do a great job and the gore effects are almost as good as Chris McInroy’s “Bad Guy #2” see review * https://adamthemoviegod.com/bad-guy-2-review/ Invaders will be online in November so keep an eye out for it, especially if you were a fan of Bad Guy #2. Brilliant work from Jason Kupfer and Co, I can’t wait to see what he does next.