“Eddie The Sleepwalking Cannibal” or in short “Eddie”, is a Danish/Canadian made Horror/Comedy from director Boris Rodriguez (no relation to filmmaker Robert Rodriguez). Lars Olafssen (played by Thure Lindhardt), was once a world renown painter whose inspiration dried up years ago. He relocates to a small Canadian town, after accepting a teaching positioning at the struggling local art school. There, he meets Eddie (Dylan Smith), a docile and mute man with a rare sleepwalking disorder. Eddie’s violent tendencies become a sort of muse for Lars, as he tries to get his career back on track. The film also stars Georgina Reilly, Stephen McHattie and Paul Braunstein. I was scrolling through films on Imdb (International movie data base), when I happened across this film. I’m quite partial to a good horror comedy and after seeing this it’s a real shame that more people haven’t heard of it.

This is such a fun, unique concept for a film. The content within it, can be horrific at times but the writers never lose track of the core story. What inspires us? How are we able to do our best work?. This of course, is a much darker look at things that can inspire. These characters are so well fleshed out and really likable, which is very rare in a film of this nature. In fact I don’t think I’ve ever seen one structured like this. Lars has a very calm temperament and a genuine passion for art and people, yet he harbors some disturbing obsession for the macabre. He shows compassion when he agrees to let Eddie stay with him. Eventually there is an ulterior motive, but in the beginning it’s more a concern for his well-being. Lesley (Reilly), is another art teacher who seems a little overwhelmed and slightly pissed off that Lars has come to the school. She has her own reasons for feeling a slight animosity towards him, which are divulged when the two get to know each other. Alain Goulem who plays Harry, the local sheriff was a blast to watch. He didn’t have a real big part but managed to display some great comedic timing. The story was very interesting because even though what’s taking place is extremely disturbing, the community is thriving off of having Lars in it. Any success that he has, seems everyone benefits from. The school begins to get much-needed funding, Eddie doesn’t end up in a facility, everyone seems happy. 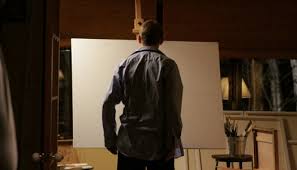 I knew from the opening scene, which I won’t spoil, (Think the cow scene from “Me Myself And Irene), that I had stumbled across something special. The style of black comedy and awkwardness between certain characters, is on point for the entire 80 minutes. A lot of why this works so well is down to the mostly Canadian cast, that show they can perform as well as the Americans can. After having seen the film I can’t imagine Lars being played by anyone else other than Thure, and that’s the sign of a great film. This only had a budget of 1.5 million but you wouldn’t pick it. With a wonderful production value enhanced by the heavily wooded, snow-covered location, is it any wonder it looks more expensive. The cinematography and camera work is fantastic and the editing has been so well-timed. The audio difference from dialogue to sound effects was perfectly mixed. Rounding it out were the cool and realistic practical blood and gore effects and the score.

Despite the artwork for the film, it’s not as bloody as one would think but that’s not a bad thing. They may have miss marketed the film as it plays out like a black comedy and not a horror which you may have been led to believe. The blood and gore effects we do get to see are really professionally done. A few solid prosthetic limbs were used, and a few gnarly action scenes made for some fun kills. I only wish that the off-screen kill (one in particular, if you have seen it you know), was shown in full because that would have looked gruesome. The score reminded me of a Coen Brothers film, like “Fargo” (which is one of my favorites), crossed with a classic Tim Burton film (Beetlejuice). A nice blend of cello and violin mixed with a lot of bass effects and well placed throughout.

Through most of the movie it’s very difficult to find fault. Assuming you can take the concept for what it is, you’ll find it hard to knit pick. Most of my quibbles were minor, for instance, the opera music was painful on the ears. I can forgive it some-what because of the comedic narrative within those scenes where its playing. A few scenes were unnecessarily incorporated to extend the running time and could have been replaced with a couple of missed connections. Charles, one of the faculty from the art school lives next door to Lars. He isn’t ever introduced to Lars, until his dog’s incessant barking becomes a thorn in Lars side. Immediately he knows Lars is working at the school and say’s he saw him. I suppose it’s a small town, but that’s my point. The fact the two never crossed paths again after that seemed unlikely. There was an opportunity to place Charles at the school so we believed this community was tight-knit. Then after the unexpected disappearance there’s no real inquiry as to his whereabouts and everyone just assumes he up and left.

The film is rather predictable if you know the basis of the story, though in this case it doesn’t put a damper on the overall entertainment value. I liked the brief back story on Eddie, who by the way, doesn’t utter a word during the whole film. A true credit to Dylan Smith who you are bound to feel for from being used one way or another. My only hope was that a reason would eventuate for why these acts of violence aided in inspiring Lars to paint some of his best work. I suppose that’s for the audience to decide.

Eddie The Sleepwalking Cannibal is a true hidden gem. It’s a travesty more people haven’t seen this film, It’s technically brilliant and meticulously crafted. The story is layered and it contains some very memorable characters with interesting personalities. The effects looked great and the performances impressive. This is the best horror/comedy since “100 Bloody Acres” *see review* (equally as unknown), so go ahead and pick up a copy of both of the films. Eddie is brilliant.