I recently had the pleasure of going along to an advanced screening of the upcoming Aussie slasher film “Charlie’s Farm” from writer/director Chris Sun. It was great to get the chance to meet some of the cast as well as Chris, at the premiere and ask them a few questions. Most of you probably don’t know who Chris Sun is but after this film is officially released on December 4, you may be hearing a lot more about him. I purchased Chris’s previous film “Daddy’s Little Girl” which was about the brutal capture and eventual torture of a convicted paedophile and murderer. It was a tough and gritty watch but a very safe environment in which to vent as an audience member about the weak penalties associated with crimes of that nature occurring in this country. Chris runs his own effects company called Slaughterfx, so not only does he have an eye for writing and directing he does all his own practical effects work and it’s great! anyway enough about Chris and onto the film…

Charlie’s Farm is about a group of friends consisting of Natasha, the token yank (played by Tara Reid “American Pie”) and her boyfriend Jason (Dean Kirkright, a dead ringer for “Wolf Creek’s” Nathan Phillips) and their friends Mick aka “Donkey” (Sam Coward) and Melanie (the lovely Allira Jaques), Ex wrestler Nathan Jones plays the role of Charlie. Needing a weekend away from the city Jason and Mick hear about the legend of Charlie’s Farm, the old home that was said to have housed a violent couple and their son Charlie, who were killed by a mob many years ago. The boys decide to keep the girls in the dark about the true nature of the trip and despite the warning from locals they head off, but shortly after arriving they encounter 7ft Charlie who’s all grown up now and wants his revenge…

The film also boasts horror heavyweights and fan favourites, Bill Moseley (The Devils Rejects and Texas Chainsaw Massacre 2) and Kane Hodder (Friday the 13th Franchise). This is the biggest budget and cast Chris has had the chance to work with and in the end the result more than speaks for itself.

Where do I start, the production value of the film is wonderful. The Cinematography looks great, very rich in colour and containing a surprising number of wonderful shots of the  landscape, including forests, lake’s, caves and many others. The set design has such an attention to detail in how old things look and their particular placement. Generally those things go unnoticed in these types of genre films. Chris’s work behind the camera has improved ten fold, I suppose that’s natural to a degree with the more experience one gains. This is his third film and he is now starting to stamp out those technical issues that he had with his first film “Come and Get Me”. The shot choices and camera work are meticulously crafted so that each single frame looks like it has its purpose and isn’t just there as filler or a segue between scene transitions. The audio is very smooth and crystal clear and the lighting is set in its own unique way in each of the scenes. I thought it was really great to see a slasher film that  takes place mostly during the day, it makes it easier to see the quality of the kills and the practical effects. The music choices and score were both good additions as well. Most of it is your typical slasher score but enhances the intensity as the action sequences start to build.

The character development is another one of the several standout aspects of the film. Most of the time this genre is all about the killing, don’t get me wrong it is the key ingredient within the genre but it’s nice to see a filmmaker actually write really cool characters as well. Dean does a great job in the role of Jason, he is kind of the nice guy but he’s easily influenced by the far less mature Donkey (pardon the pun haha) and that gets him in trouble. Sam gets most of the acolytes from me because his character was just such a loveable goof. Equal parts Bogan and chubby monkey that you just want to hug (haha), Dave is pure entertainment. It’s good to see a multi-layered character here. You would think after the opening five or ten minutes and the few gags early on in the film that this guy is just here for comedic relief, but that’s not the case at all as he becomes a very main character. Allira and Tara round out the cast nicely. Allira is lovely and down to earth and very much suited to playing Melanie who is just a really likeable and happy-go-lucky girl caught up in a nasty situation. Allira didn’t even seem like she was acting, there was such a natural chemistry between her and the trio. I think Tara turns in the weakest performance of the four, which is odd given her years of experience. I thought she nailed most of the emotionally intense scenes but during regular conversation and building the layers of the character it fell flat. Maybe I just didn’t like her or rate her because the character was a bit one-dimensional, it’s written in such a way that it makes it hard for you to root for her.

The film will be taken much more seriously when people see Bill and Kane’s names attached to it and that’s great for indie horror in Australia. Bill’s character John Wilson, who happens to be Charlie’s degenerate father supplies us with a good flashback and some great imagery, I think it adds to the development of the back story and the part was warranted and Bill fills the role very well as he nearly always does. I am a Kane Hodder fan but honestly I couldn’t really see the point of his role here, there was no real purpose other than to add to the body count, maybe it was just to have another genre actor with experience attached to the project. Lastly, the kills and practical effects must be mentioned. If you have seen any of Chris’s work or looked on the SlaughterFx website you know what to expect. Once again he delivers in all areas with this work, we are given stabbings, choking, dismemberment, face ripping etc etc. I don’t want to spoil the intricacies of each kill for those who plan to see it next week, so I will leave it there.

I can’t say there is anything obviously bad from a technical viewpoint or as far as entertainment goes with Charlie’s Farm. There were a few small things such as the mentioning of Kane Hodder and the continuity issues with the introduction of his character. It was never really established who he was or why he cared about the situation so much. We only see him two or three times throughout the entire film, the first is a very casual conversation via phone, the next is him and a woman talking, maybe his wife?? Your never quiet sure about that. Then he makes mention of driving out to the area to see if the group is there and then he isn’t sighted again until the final act rolls around and he happens to be snooping around in the Wilson family home?? It was all a bit displaced. I wasn’t sold on the fact that he even needed to be included in the film at all. I suppose the more important parts of the film are shown and his role just isn’t that crucial, but that’s also kind of my point, why bother??. A few times characters make those stupid moves that you would never make in order to progress the story, normally I’m not bothered but when it’s Tara making them (who is already annoying) it’s like uhhhh… kill me now (haha).

The other scene that was a little to convenient was the setup to take this trip in the beginning of the film. It’s not all that realistic to just sit around and decide all of a sudden your going to take a trip. Something about people having work or holidays etc, probably needed to be included in the dialogue so it puts the decision into perspective. I would have liked a proper introduction to these characters in a slightly different setting. Also, even though I said I admire the choice to shoot the majority of the film during the day it does put a damper on the amount of suspense you can generate. There are a few attempts at jump scares which mostly fall flat and even though Nathan does a great job of thumping around and manhandling his victims I never felt truly disturbed or frightened by him. Although the makeup done on his skin was pretty horrific and looked damn cool! 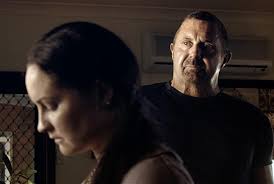 Charlie’s Farm is an Aussie gem, rarely do you see anything this good come out of our country that has the ability to stand up against some of America’s best low-budget slasher films (relatively speaking). It’s got a great production value and gorgeous locations, along with wonderful camera work and entertaining and enjoyable characters. To top it all off, it’s got the body count and the practical gore effects you hope these types of films will deliver on but rarely do. Chris has said many times how proud of the film he is and so he should be! My congratulations to everyone involved with the film it really was a blast and Chris’s best work to date, be sure to catch it in limited release from December 4th! 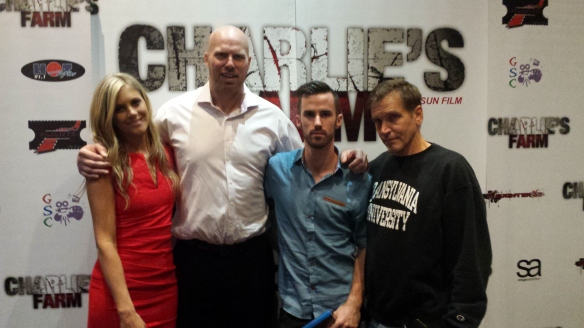