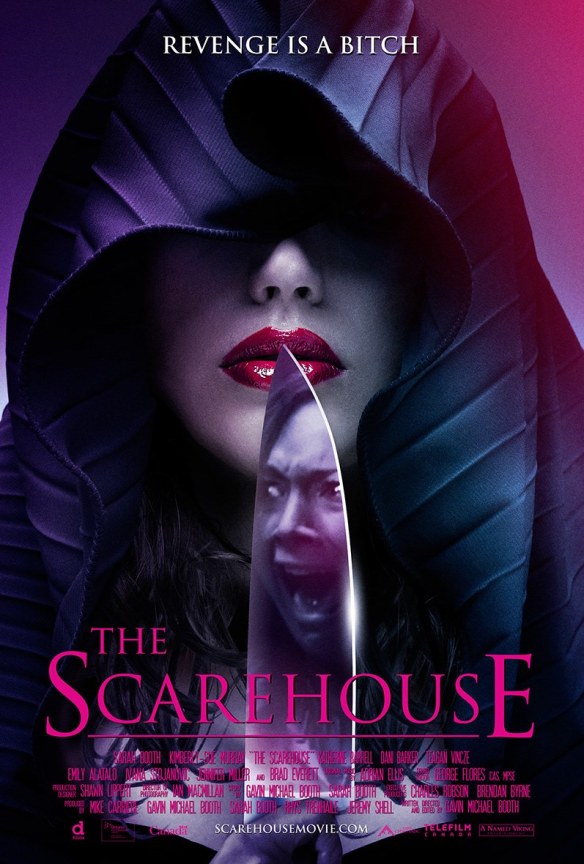 Firstly, I just want to say thankyou to Gavin Michael Booth, director of the indie Horror/Thriller film “The Scarehouse” for allowing me to view and online screener of the film. The Scarehouse is currently circling local film festivals in the US and from what I hear it’s having it’s fair share of success. The Scarehouse is a story about two old friends Corey and Elaina who get together to open a haunted fun house on Halloween. What appears to start out as just a bit of fun amongst the girls and their sorority sisters/guests for the night, takes a deadly turn when their true intentions come out and everyone’s past begins to catch up with them. The film stars Sarah Booth, Kimberly- Sue Murray, Katherine Barrell, Jennifer Miller, Teagan Vincze, Emily Alatalo, Dani Barker and Ivana Stojanovic 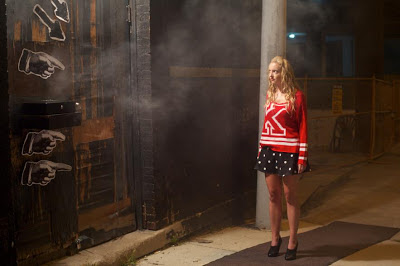 This will hopefully be a quick and mostly spoiler free review. I hadn’t heard of Gavin  or this film before but stumbled across the Facebook page after doing a write-up for another Horror flick and I’m glad I did because I think Gavin is going to be one to look out for in the near future. I apologise that this review has taken so long but due to work circumstances I wasn’t able to do a write-up but I watched the film several weeks ago.

Right off the bat there is an eye-catching introduction with the credits rolling over the opening scenes, accompanied by a really cool electro/pop song and some quick cut editing. The audio and camera work are both very impressive technical standouts. Some of the shot choices for various scenes really gave the look of this film a particular polished style. Choosing to shoot in a fun house is a little bit of nod to certain genre film’s from the 70’s and 80’s and it’s always a pretty safe bet to go with a location that people know goes hand in hand with the style of film you want to make. The editing is all very fast and snappy, no shots linger nor do they feel like they are cut so short they have no relevance to the story. 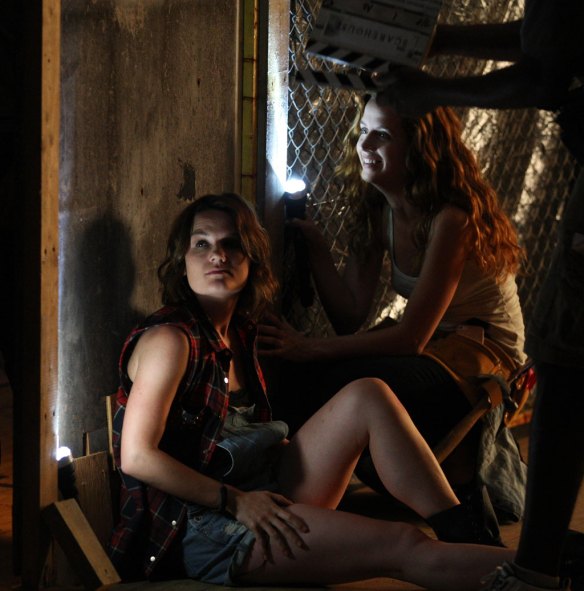 I watch a lot of independent films but this was cast of entirely fresh faces and mostly consisting of all women. Intentionally or not that was kind of the original spin put on the film by Gavin and Sarah who I believe co-wrote it. You don’t see to many horror films these days that have nearly an all female cast, I liked that. Everyone does there bit for the most part and nobody steals the show from anybody else. It’s all pretty solid and about what you would expect from a film of this budget. A few inconsistent moments in some of the more emotional scenes bring the quality down marginally but not enough to squash the enjoyment.

The six core girls have such different personalities and different characteristics making the likability factor an issue. Although the girls are all beautiful and stunning in their own way, on the inside they are definitely not. It works both for and against the film, those hoping to see them get their just deserts should be pretty satisfied but those wishing to get behind a strong likeable female protagonist might struggle to find one here. The last thing I want to touch on is the cool practical blood and gore effects. This isn’t an effects heavy type of Horror/Slasher, it tends to ground itself in the character development and back story so don’t expect major bloodshed, but what we do get is pretty damn good.

Even though I enjoyed the way the film got the ball rolling immediately I didn’t like that there was no real introduction to our main characters. In hindsight I know that’s probably because Gavin doesn’t want to give away the details of his entire film in the first 10 minutes. However, I think a scene of a simple conversation between Corey and Elaina about what they might plan would have been a simple inclusion and not given anything away about their motives, rather than just open up with them setting up dummies etc etc. I would have adjusted some of the sequencing so as to not lose people in the timeline of when and what has taken place. Trading between some of the camera/found footage stuff doesn’t really accomplish much, given that majority of what was recorded is girls being girly at a slumber party. Now I know a couple of the conversations and ultimately what happens there is relevent to the rest of the story but their may have been a better way to convey that.

I think most of the characters reactions are realistic enough but I thought that Elaina’s initial reaction when the situation starts, assuming she knew what was going to happen seemed unlikely. I suppose people can have a bit of shock or an unexpected reaction going from something starting out as a plan then turning to action but clearly she becomes quickly okay with things escalating and I’m not sure about that. The opportunities to build the suspense were limited and ultimately if that misses the mark and your action sequences are also lacking it can end up a bit of a letdown. The dialogue between Elaina and Corey gives us some good insight into their mindset and the interactions they have are pretty good. But for every piece of dialogue helping the story you have countless C-bombs hurting it. I’m all for some profanity, most of my favourite films have a lot of it but it tends to be in context with the narrative, this wasn’t. Most of the bitchiness and crude stuff felt pretty forced and probably should have been cut. The actions of these characters said enough about them without them actually opening their mouths and saying it.

The Scarehouse is a pretty good film, I was thoroughly entertained for the 90 minute running time and I think Gavin has a great eye. It’s technically well made, pretty well written and contains a young and attractive cast who give mostly commendable performances. If a few sequencing and continuity issues were polished up to make things a little clearer this would be one of the best all female horror flicks made. I ended up with a vibe similar to Nine Dead meets Urban Legend. When this one becomes available on Dvd pick yourself up a copy, you won’t regret it! Good work!