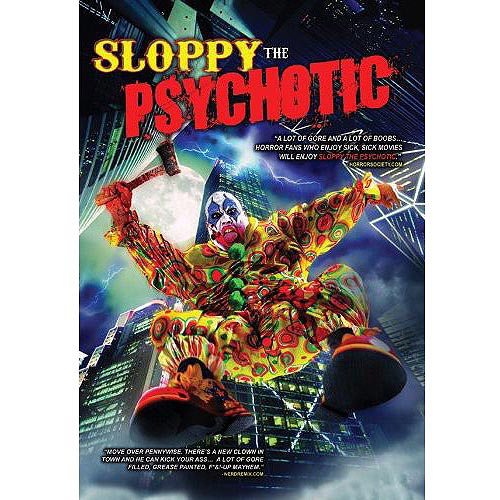 Here we have Mike O’Mahony’s latest film, he is an indie horror filmmaker and a really cool guy. I had the chance to see his first feature film “Deadly Detour” a few months ago, I enjoyed it a lot so I purchased his other two films. One of which is called “Sloppy The Psychotic”. It stars Mike, as Sloppy the clown along with James Costa who plays a bully , there are also a bunch of other people who play less important roles. A cruel twist of fate leaves happy-go-lucky Mike (aka Sloppy), a children’s birthday clown unemployed and on a downward spiral. Sloppy starts to abuse alcohol and goes on a rampage leaving no one unharmed, his victims include the homeless, prostitutes, bullies and children.

Like I said, I really enjoyed Mike’s first film “Deadly Detour”, it had a lot of technical issues but the fun story and fantastic blood and gore effects with a limited budget, made it entertaining and memorable. Sloppy has the same feel about it but this time it’s a much more polished product. Imdb (International Movie Data Base) says the film was made for around $10,000 but I have feeling that it’s less than $5,000, you’d have to ask Mike to be sure though. The production value is great. For one, It’s great to see another clown (horror) flick, there really aren’t many of them being made these days. This time around the audio is nice and clear and the camera work focuses much more on still shots, some of which Deadly Detour didn’t get right. The scenes are edited a lot smoother and it all flows really well. It’s a short running time of 75 minutes but manages to give you enough of an introduction to Mike and the type of person he is at the start and why he changes. The audience knows he is not really a bad guy, maybe he’s just been dealt a bad hand and not dealing with it in the most productive way. 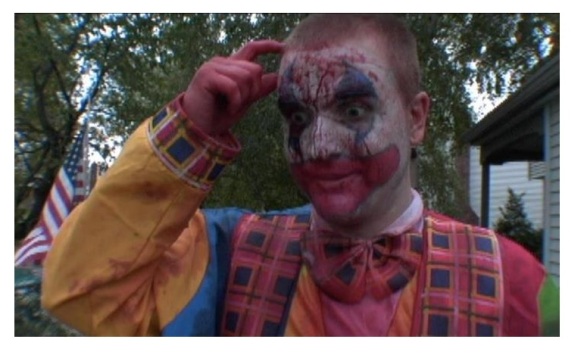 The kill scenes and blood and gore effects are as good as Deadly Detour, if not better. It relies on this aspect as the selling point and it doesn’t let you down. It’s a little slow too get to the action but when it does, all hell breaks loose! There is a vicious stabbing in the back of a car, that leaves a trail of entrails (haha so to speak). There are also a bunch of really cool inventive practical effects that include an exploding head, genitalia decapitation and a very wrong skull crushing scene (haha). However, the best is saved until last, when at a birthday party Sloppy really loses it! The reason the film works well is that Mike does a really solid job of the acting, it was a big improvement on some of the acting in his first film (which he didn’t take part in). It’s really not meant to be taken seriously, it’s just good low-budget fun.

The film is not without a few minor issues. I didn’t like the opening song and credits, I thought it was pretty cheesy. Most of the score really didn’t fit the tone of what the movie was about, it may have been done like that on purpose but I thought most of it missed the mark. The audio peaks out in a few places. Most noticeably at the pool party scene when the bullies play a prank on Sloppy and they are yelling and laughing. However, Mike has definitely been improving with the technical aspects of his filmmaking, so I commend him on that. A few really cool ideas weren’t taken full advantage of, either due to cutting away camera shots or maybe budgetary constraints, I’m not too sure but that was a little disappointing. 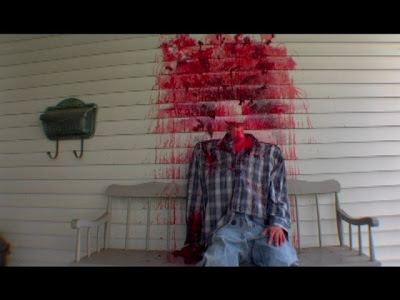 Obviously this is not the most original concept, but I’m glad there is still a place for movies about Killer Clowns (and not just from outer space). It’s taking the basic kids fear of these “entertainers”a few steps to far, but in the best possible way. With a title like Sloppy the Psychotic you can’t help but be intrigued, right? If you like low-budget fun and gory horror flicks then this is a must see! You will never think of the classic children’s song “Pop Goes The Weasel”, the same again.