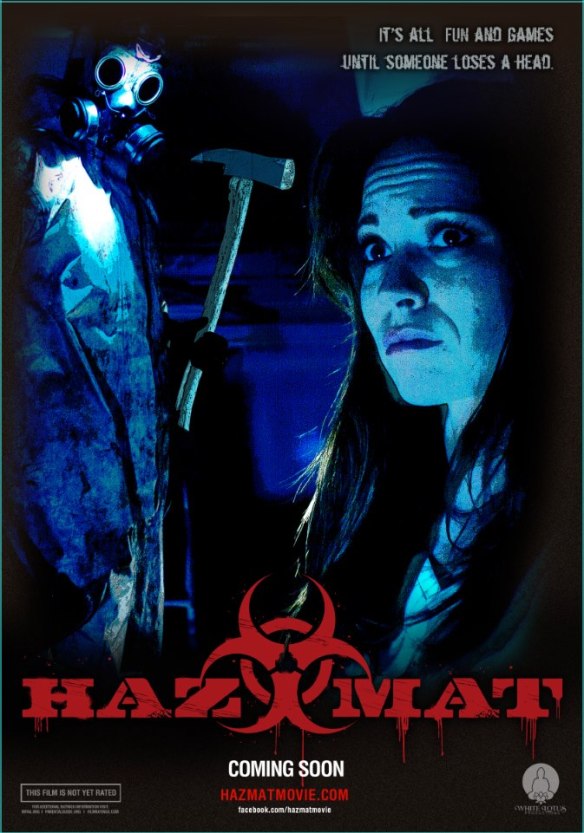 First off, I want to say thankyou to Lou Simon for sending me the link to an online screener of her second full length film “HazMat”. The film is a 80’s style slasher flick about a television crew and their hidden camera reality show called “Scary Antics”. They get unsuspecting people on the show who have been setup by friends who want to scare the hell out of them. It seems that this time they have set up the wrong person. Jacob is a disturbed young man who loses his grip on reality after being setup by his “friends”, now heads will roll! This stars Norbert Velez, Todd Bruno, Aniela McGuinness, Gema Calero and Reggie Peters.

Even though this film isn’t an original concept I think the trailer promotes it really successfully. It looks like a really polished product, I would imagine the film was made on a similar budget to Lou’s past work, maybe 50 or 100 thousand dollars. I love the way this opens straight away with the credits and a look at the building which was used for the opening scene. The audio is nice and clear, along with the score which is crafted with perfect suspense. It’s reminiscent of the music and score in “Friday the 13th” and “My Bloody Valentine”, I loved it. The sound effects were implemented perfectly and were used cleverly to enhance a few of the jump scares. Most of the technical aspects are among some of the best that I have seen in any low-budget horror flick. The camera work is perfect. They only rely on the surveillance camera when members of the group are stuck in the hidden room. The rest of the film is shot crisply with steady-cam and very well-edited. 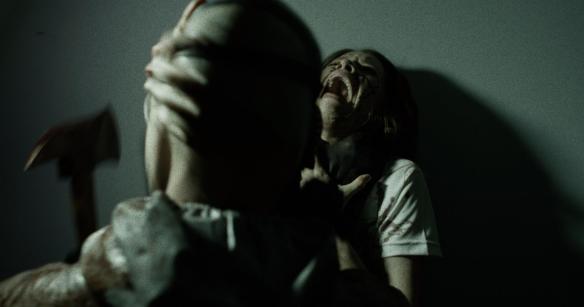 The acting was also very good. I haven’t seen any of these actors/actresses in anything before, so it was great to see fresh faces and people who can actually act. It was nice to see a little introduction and some background information on the prank that was going to be played and why the friends were doing it. Once the action picks up the lighting becomes more effective in creating suspense. The kill scenes are like something out of the 80’s, it’s a high body count very much like “My Bloody Valentine” or “The Crazies”. Most characters are killed with an axe, it’s good (not so clean) fun!

The few issues I noticed with the movie were very minor. The friends mention early on that the character of Jacob doesn’t talk much, that he is strange and kind of moody. Well, the second Jacob hit’s the place he is talking everybody’s ear off! Yes he is raving about crazy stuff that may have happened in the chemical plant they are in but still. Norbert needed to play Jacob the way it was written in the script, or cut out that line of dialogue. I think he did a solid job of the role, showing some great mannerisms (even with a hazard oxygen mask on). However, I’m not sure if he was the correct choice for the part. I was picturing someone a bit less of a brute, but I suppose that works well when the killing starts. I thought the reactions from some of the group were underplayed a bit too. With the exception of Melanie no one seemed to be freaking out as much as I thought they would have. The only other minor flaw in the film was the laziness of the fictional crew not clearing every single area or making sure there weren’t any possible weapons Jacob could use, that was a little weak. Obviously if he doesn’t get a weapon though, you don’t have a movie. I just think they could have been a little bit more inventive with how he acquires the axe.

HazMat is a fantastic and entertaining horror/slasher film. It’s the best film that I have seen with this type of budget and believe me I’ve watched a lot of these! The solid acting, the careful technical aspects and attention to detail separate this from the hundreds of other mediocre slashers. I was hoping for a little more blood and gore and I think they cut away from a few of the more violent kills too often. It could be due to the budget or maybe they just wanted to depict it as good-natured fun and not rely on shock value. Regardless of all that, I love the fact that Lou has combined the reality tv aspect of films like “The Task” or “Blood Relic” and combined it with some of the crowd favourite 80’s and 90’s slashers resulting in a product in a league of its own! I’m very happy with what I saw.

Lou please keep in touch and let me know when the dvd/blu ray becomes available I will defiantly be buying this one and adding it to my favourite films of the genre.