Here we have it, the new low-budget 80’s throwback Horror/Comedy “Sorority Party Massacre”. The film stars some gorgeous girls, the likes of Marissa Skell, Eve Mauro, Yvette Yates, Casey Fitzgerald, Rebecca Grant and Adrian Kirk. In addition to the girls, Ed O’Ross as “Sheriff Lumpkin” and Thomas Downey as “Detective Watts”. After an incident involving police brutality Watts is placed on suspension by his Captain. The Captain agrees to get the charges thrown out if Detective Watts goes to a remote island to check up on The Captains daughter (who hasn’t checked in with him). She is supposed to be competing against various Sorority sisters for a top position on some type of committee, anyways the details are not that important (haha). Once the Detective arrives, he meets and teams up with The local Sheriff hoping to find a mysterious killer after it’s discovered women have been disappearing from this remote island for years. They must stop the killer who is knocking off the competition (pardon the pun) one by one.

This low-budget flick had a few moments of decent comedy, for one I can relate to the boat scene. The big city cop getting thrown all over the place and feeling sea sick, it’s horrible. Of course I already mentioned the amount of lovely girls in the movie, that’s always a bonus. The acting is not to bad for the most part. There are a few weaker and over the top scenes however I expect that in these types of films. It’s shot pretty nicely as well and even though the action sequences are few and far between, the makeup and prosthetics were quiet effective. The score and music was inconsistent but I really liked the southern music with rock guitar. Later in the film we get some real cheesy, sci-fi B movie music. Cross that with music from a band like “The Cat Empire” and you have a very strange mix.

This one needed a lot more blood and gore from the horror aspect, not sure if they withheld because of the budget or if they never had the intention to make a mess. The action sequences were mostly pretty lame, all we see is the aftermath of the characters deaths. The choreography and sound effects in the fight scene between Paige (Skell) and Brooklyn (Mauro) was dreadful. The timing was off and the action was weak. The lighting for the film is another big weakness. Most of the shots look like they are straight out of a daily soap like “Passions”, I hope that wasn’t the desired effect. 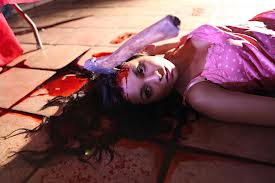 Look, this one had its moment’s I think it’s worth a viewing. There isn’t a lot of story and it does become pretty predictable early on (I picked the killer). At the same time though it’s got a genuine and good-natured vibe about it, gorgeous girls and classic petty banter. I also like the fact there was a little sequel (for lack of a better word), tagged on to the end of the film which was probably better than the actual movie. Sorority Party Massacre takes full advantage of the 80’s campy atmosphere and that’s worth something.

My rating for “Sorority Party Massacre” is 4/10