First time filmmaker, Yiuwing Lam present’s his low-budget found footage style film “Prank”. The subject matter is about school bullying and victims of that bullying. It stars Nick Renaud, Henry Monfries, Hannah Kasulka and Alastair James. “Dax” (James) has apparently been bullying “Connor” (Renaud), for years and doesn’t treat “Jordan” (Monfries) that much better. The two victims set out to get revenge by trying to pull off the biggest prank on Dax. Now I’m not to sure if Lam himself is the smart/nerdy type and if he is drawing on experiences in his own life, or if it’s just a fictional idea? Either way, it has far to many of the predictable clichés to separate it from its neighbouring films e.g (Elephant, Bang Bang Your Dead and Home Room). 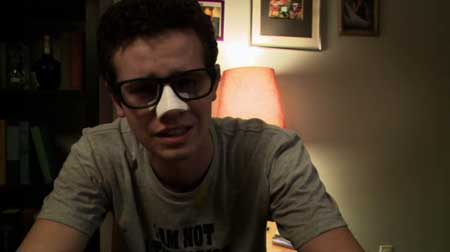 It’s mostly shot from behind the handy-cam by whoever has it at the time. It’s not so much a found footage film because things are being recorded on the fly (Cloverfield style). The camera work is okay but the editing is very choppy and a constant beep on and off every time a new scene is started. The acting is average, I guess for the quality of the script our two main actors can only do so much. I think that deep down there is a message that could have resonated amongst viewers if the story was developed much better. Instead the message about bullying and people’s actions and the consequences that go along with those get lost in this drivel.

The film basically stereotypes all teens that may have been bullied at one time or another in their lives. Basically if you are interested in anything to do with space be it, tv shows, movies, comic books and conventions or you’re smart, you read or you have glasses you will be bullied. We know this isn’t true. Even the most popular of people can suffer from bullying. I think everyone suffers from some form of it throughout the course of there lives. To define it with these aspects is just wrong. The dialogue in the movie seems mostly improvised and trust me it shows. Two teenagers would not talk the way these guys do. Especially the way Connor talks, he uses words adults wouldn’t even understand, it’s screaming “look at how nerdy I am”.

Another issue is that the score and music is non-existent. I don’t think I have ever watched a film without a single piece of music or a score, this would be a first. We don’t really feel what these kids are going through and therefore can’t connect to them. The extent of the bullying we here about is never really shown, the story could have perhaps been told across a 10 year period, just an idea. I wasn’t even clear on what the plan for revenge was, they spend ages talking about the perfect prank and goofing around in clown masks and setting up a random birthday party, what was that all about? And in the process nothing ever gets clarified.

After forty minutes of this painfully cliché and pretentious “artistic” school bullying film, I had to turn it off. I’m not sure why people are labelling this clever and smart, with a good twist. I did skip to the end, I couldn’t find a twist. Maybe I missed something, If I did, I’m glad I did. The coolest thing about this film is the poster artwork, It’s a movie beyond disappointing. This would be one of the absolute worst things I have seen in a long time.