All the buzz from 2014 was surrounding Alejandro Inarritu’s critically acclaimed “Birdman” starring Michael Keaton. The story centers on washed up actor Riggan Thomas (Keaton), who once played an iconic superhero but has since been forgotten. Riggan is mounting a Broadway play in which he plays lead character hoping it will please the masses in a bid to reclaim his past glory. Riggan has cast the lovely and talented Lesley (Naomi Watts), in the leading role along with the popular and experienced Mike Shiner (Edward Norton). The combination of balancing a very egotistical group of actors, himself included and the strained relationship with his ex-wife and their daughter Sam (played by Emma Stone) proves difficult. Will it all be too much for Riggan before opening night?.

This type of screenplay reminds me of something that Charlie Kauffman would write. “Adaptation” and “Synecdoche, New York” are different but both about personal success in the same way Birdman is. These theater productions often make for an interesting perspective but can become a little bland. I wasn’t sure this would be my type of film and honestly I’m still not sure if it is.

The casting for this film was key. It’s great to see Michael Keaton in a lead role, especially after his lack of those in recent time. I think the writers only begin to scratch the surface of Riggan but Keaton does a solid job. Every event in Riggan’s life seems more like a crisis to which he sporadically flips out over. He’s a man who will stop at nothing to get back what he’s lost. Emma Stone portrays one of the only likable characters and this is some of her best work. Her scenes with Keaton, along with the several she has with Edward Norton are gripping. She draws on a particular feeling with absolute ease and not many young actresses can do that. Naomi doesn’t have a real crucial part to play but she supports the rest of the cast nicely and has one or two memorable scenes. The biggest thing about Birdman is Edward Norton’s return to the fold. Jake is such an egotistical and pretentious method actor who only knows himself on stage and refuses to peel back the layers and find out who he really is. Norton took a break from key roles in bigger films for quite a while, but hopefully this one sets up plenty more great performances in the future.

I don’t think I have ever seen a film shot in this fashion before. It’s almost as though its one continuous take, where the camera follows Riggan’s entire journey as he’s living it. The shot will follow one character down a hall way and suddenly veer off into a secondary conversation between two other characters. It was a very interesting style to shoot in and it worked for the most part. However, there was room for a few more conventional camera angles when the film gets into more emotionally heavy dialogue. The constant inner monologue Riggan has with himself is due to self-doubt, which is then projected outward and manifests itself in the form of birdman. It allows Riggan that feeling of power, which he uses to move things around the room and fly, among other things. I liked the narration from Keaton but some of the surreal aspects lost me, I don’t think the superhero stuff was crucial, he could have been a star of anything. 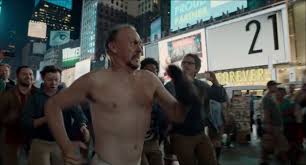 Riggan is clearly playing a character within the play that parallels his own in life. The missed opportunities to connect with his daughter, his determination to get back what he’s lost, just like the character in the play wants his love back. It’s clear why Riggan is always at odds with himself, he can’t deal with the fear of falling into the cracks or becoming just another nobody so he neglects those who love him in order to succeed as an individual. Actors probably have a difficult time separating fantasy from reality especially the really good ones who immerse themselves in the role so that was a nice touch.

Although the shooting style is unique and works well to keep the feeling of one man’s struggle, gets a little tedious and the novelty wears off after a while. A few still shots and regular framing could have given it another dynamic. It’s not often that an entire score gets distracting but here it does. A few pieces of music worked nicely but the overbearing and repetitious jazz drumming, which often drowned out the dialogue, got old fast. The subject matter being what it was didn’t have to be scored at all and would have made it much more cohesive. The surrealism in a few of Riggan’s fantasies got a bit silly for me. The superhero trilogy that gave Riggan his initial fame was just a way of saying something about Hollywood films and your average movie goer these days. 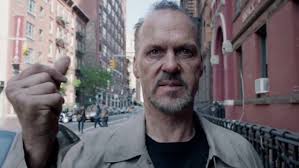 The mass-produced comic book style of film sells. Anything with fast cars, shootouts or superhero’s is what your average Joe wants these days. Unless you have something new and not so obvious to say about it than it speaks for itself. This was marketed as some what of a Black Comedy, if that’s the case I think it missed the mark by a long shot. I didn’t even chuckle once during this. Am I supposed to laugh at a guy who gets rough with a woman or becomes drunk and belligerent? I tried to ignore some of the crass dialogue and attempt at humor. Instead, I took it as a character study of a very self-absorbed man trying to find his glory. It plays as a straight drama but the problem when the comedy aspect is absent, is that you need to find a way to delve deeper into the drama and Birdman doesn’t. The problem lies with all these truly self-indulgent characters none of which you really care about.

They may have interesting personalities, like Jake for example. But they are never explored. Why does he have such a hard time finding his true self in the outside world?. Does he have issues with a sex life? Does he have a drug addiction?. He treats the women in his life poorly, he puts down Riggan’s work and he holds himself way above others when it comes to his craft. Lesley’s life goal was to make it on Broadway and with getting the lead in Riggan’s production you could say she made it. Therefore her character arc is complete, unless there’s more we don’t know?. I can forgive the others because they are passengers in another mans journey. Riggan is the most difficult to have sympathy for because he just continues to miss the point of life. Yes, we all fear that we won’t be remembered if we don’t do something important with our lives or make a difference in somebody elses. I guarantee you though if you neglect those people who care about you that will be your biggest regret. After all, it’s the people in your life that give it purpose and meaning otherwise you’re just surviving. Do we need a movie to tell us that?.

Birdman’s story isn’t a new or profound one and similar notions have been explored in other films. What I enjoyed most about this was the casting and the performances. It was great to see impressive scenes like the ones Edward and Emma shared. The shooting style was cool and the dialogue, mostly entertaining and fast. Unfortunately, I feel like Birdman only begins to scratch the surface of the characters and the world. What is Alejandro trying to say about any of it? All I could take away from this was that you should stay true to yourself, don’t sell out, don’t look for commercial success and aim for a more personal success. Whatever that is for you. I see plenty of merit in Birdman. I think it’s well made but it glosses over far too many of its hidden messages and fails to provide any real answers. Not even close to the best film of the year.