This is a review of the Region A (US) Blu Ray of the Drama/War film “Alone We Fight”, Written and Directed by Justin Lee (Any Bullet Will Do). Alone We Fight is an independent war film set in 1944 and based on true events. On the border of Germany and Belgium, two US Army Rangers, in Sergeant Gregory Falcone (played by Aidan Bristow) and Private Michael “Boston” O’Reilly (Matthew James McCarthy), manage to escape the clutches of an enemy patrol unit but are soon given orders to take ground held by the Germans who are slowly approaching the allied lines. The film also stars Corbin Bernsen (TV’s Psych), Kate Conway, Lara Thomas Ducey, and Johnny Messner (Tears Of The Sun). This is the fourth feature-length film from Lee, all of which have been released this year! (a truly impressive feat in an of itself). Justin has proven thus far to have a great eye for detail in more than just one type of film. I’ve both thoroughly enjoyed and respected each of his prior films, two of which were westerns – the most impressive being the aforementioned “Any Bullet Will Do” *see review* https://adamthemoviegod.com/any-bullet-will-do-review-you-reap-what-you-sow/.

I figured a war picture courtesy of Papa Octopus Productions wouldn’t be too far away – I was right. Alone We Fight is an ambitious and surprisingly detailed film given the obvious budget constraints. I’ve always said good drama is the hardest thing to come by when you’re working with little to no money (but even more so in this genre). Lee joins forces once again with the talented duo of DP, Justin Janowitz (A Reckoning) and Composer, Jared Forman (Any Bullet Will Do). Part of what I like about POP is that there’s a uniformity about what they’re doing and the consistency shows in their brief but memorable body of work. Alone We Fight opens with one of Lee’s mainstays, an obligatory slow-motion sequence (via 5K) that sees a small group of allied soldiers being led by a German patrol unit. Those particular frames look great and all of Janowitz’s shot choices are simple yet effective. The highlight is a series of gorgeous low angle shots of Falcone and O’Reilly creeping through the leafy greens of the forest. The audio track is quite sharp (with some ADR included) and Jared’s original score is another noteworthy aspect. He opts for some big orchestral themes during establishing content, followed by the sounds of percussive style drumming to coincide with the battle scenes. In addition, there’s a nice piano ballad in the third act.

When it comes to Justin and films from Papa Octopus, it’s been all about the pairing of actors, Kevin Makely and Todd Robinson. Much like his characters here, this is the first time I’ve seen Lee venture into unfamiliar territory in order to find his talent – the result is somewhat of a mixed bag. On a positive note, I was excited to see Bristow cast in the lead role, as he was super impressive in this years “Strawberry Flavored Plastic”, Written and Directed by Colin Bemis. Aidan’s performance is by far and away the most consistent of the bunch and he brings likable qualities to squad leader Falcone. Conway and Ducey play medics, they’re a little uneven but they do their best with the material they’re given. The experience comes in the form of Bernsen, playing a colonel, though he’s only present for the one scene, and Messner as a captain in a sort of blink and you’ll miss it kind of deal. The set design is intelligently displayed and you can tell that Lee attempted to go the whole nine yards to make this environment seem credible (at least with as far as the budget would take him). The inclusion of a big 50 Cal machine gun makes for a pretty entertaining shootout that takes place around the midway point of the film. Service vehicles are used in the background of shots and even a couple of replica tanks/armored vehicles make an appearance during the climax. Unfortunately, the paint jobs and overall pristine condition of them makes it’s quite obvious that they weren’t able to actually be used (probably for fear of damage). Still, you have to commend the effort.

Sadly, Alone We Fight is proof yet again that you just can’t make a great war film on a budget. It’s nobodies fault, it’s just the way it is. Lee does his best to hide the two big and pertinent absentees from his film (being that of characters and action) by establishing a more intimate setting with the hopes that you’ll invest deeply in the characters. The problem with that is that the gravitas is never fully felt due to the lack of scale that the whole thing is conceived on. Michael Tang’s edit doesn’t contain much slack but the overall pacing still feels a touch sluggish – even at just 90 minutes. The film is supposedly based on true events (how much is true I don’t know) but the bulk of it centers on just Falcone and Boston (the latter of whom I didn’t take to). We’re only introduced to one or two other rangers because the narrative ends up calling for it – ultimately questioning the believability of it all. Consequently, sizeable chunks of the runtime turn conversation heavy, talk that consists mostly of banter and things back home, mothers, sports etc. The first sign of action comes in the form of a slow-motion sequence that sees Falcone and Boston overpower and escape the enemy. Lee does have a tendency to take that same avenue with his actions scenes, probably to avoid too much choreography – The drawback is that it loses its punch. McCarthy’s Mikey wasn’t a character I ever warmed to – that and Matthew’s performance lacked conviction. It’s an issue that can be problematic when your film only really has a couple of characters. There are some indisputable continuity issues and conveniences with Alone We Fight as well. Those of you who’ve seen any of Lee’s prior films will be sure to recognize more of the heavily wooded forest from parts of the US (likely to be the same ones he’s used in Montana or Oregon if I recall). The problem is that Justin establishes the film as taking place in December in Europe, despite there being no snow to speak of. I’m not sure how that happened but it’s an issue easily rectifiable simply by changing the time of the year the film takes place at. Either that or you have to shoot in the states in Winter so the weather patterns correlate. 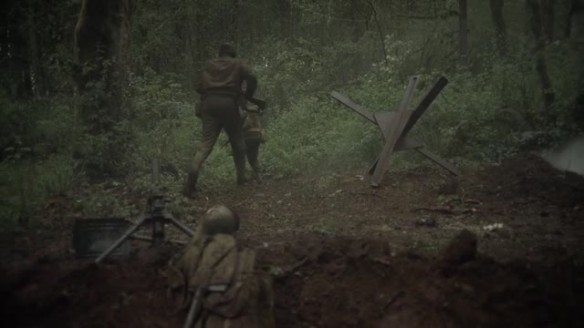 It would have been a welcomed addition to have the German soldiers interact with each other a little more (I know it means learning parts of the language but still), and an opportunity was missed for the inclusion of a scene where perhaps one of the rangers suddenly wakes the other up because the enemy is fast approaching – therefore create a little more suspense to proceedings. I could have gone for a little more diversity with some of the shot choices, and everyone’s costumes needed to look a little more worn and rundown than they do. On a number of occasions, things just happen to be right where they need to be. For example, the boys escape their captors and just so happen to stumble into their camp and medic station almost immediately. They would’ve likely been miles away from that location and there’s no depiction of a transition or time-lapse. During the climax, Boston just so happens to come across a Panzerfaust (anti-tank weapon) sitting well outside the parameters of the sandbagged enemy area… what are the odds the Germans would leave that unattended? That’s another prime example of missed suspense and taking the time to flesh out the scene a little better in relation to how Mikey gets the weapon in his possession. These rangers aren’t the brightest either. Anyone who’s been trained would know never to run without cover, yet these guys continue to do it. They’re told by the sergeant to stay low but they never do, hell, even he himself gets popped in the shoulder from failing to heed his own advice. Needless to say, they were a little frustrating.

Alone We Fight doesn’t quite reach the same heights as some of Justin’s previous work but it’s still a controlled and serviceable attempt at a memorable war film. It’s an ambitious project that sees solid cinematography and some lovely music from Lee’s regulars in Janowitz and Forman respectively. It’s nice to see Bristow in another lead role and he delivers a modest performance. I’d be lying if I said the absence of both Makely and Robinson (at least in some capacity) wasn’t noticeable, though the secondary players are still decent they just don’t offer up anything special. The most impressive facet of the film is certainly the detailed production design, which is usually almost always lacking with these types of low-budget entries. Lee missed the opportunity to write a couple more suspenseful scenes to break up some of the daily grind content and there are a few too many convenient plot points throughout. Characters actions don’t always help to sell their credibility as soldiers and the film just doesn’t carry that emotional punch it wants you to think it does. Alone We Fight is extremely light in the headcount department and the action takes place on a very small-scale (mostly due to the budget), so what you’re left with is a dialogue-heavy film that just isn’t as engaging as you’d like it to be. All that said, if you’re a die-hard war fan I think you’ll still enjoy this one. I look forward to seeing what Lee and his company do next year. You can check out the official trailer below and the film is now available for purchase on Amazon!