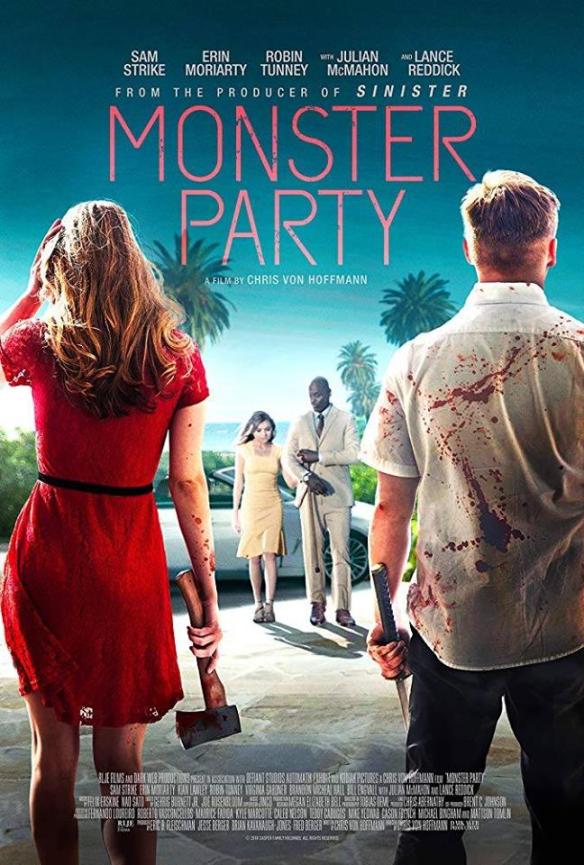 RLJE Films bring us the latest slice of home invasion horror with “Monster Party”, a film Written and Directed by Chris von Hoffmann (Drifter). Monster Party centers around three teenage burglars, Casper (played by Sam Strike), and couple Iris and Dodge (played respectively by Virginia Gardner and Brandon Michael Hall), who get more than they bargained for when they infiltrate the home of a wealthy aristocratic family who is hosting an exclusive dinner party. The film also stars Erin Moriarty (Blood Father), Kian Lawley (Before I Fall), Robin Tunney (The Craft), Julian McMahon (TV’s Charmed), Chester Rushing (Netflix’s Stranger Things), and Lance Reddick (John Wick). Monster Party is just Hoffmann’s second feature-length film and it boasts quite an impressive cast. He previously wrote and directed “Drifter”, a post-apocalyptic film about two brothers who seek refuge in a small abandoned town where they encounter a group of cannibals *see review* https://adamthemoviegod.com/drifter-review-3/.

I’ve been following Chris’s latest film for a while now so I was quite excited to finally be able to check it out. Despite the home invasion sub-genre running rampant in film of late, I love it when one is done right. Monster Party is sure to draw comparisons to both Fede Alvarez’s superb “Don’t Breathe”, as well as Karyn Kusama’s unnerving “The Invitation” irrespective of it never reaching the same heights. In terms of quality and budget, I’d liken it to the lesser known 2010 film, “The Perfect Host” – a perfectly serviceable entry. The poster art is rather eye-catching and there are more than a few familiar faces attached to this one. DP, Tobias Deml (who also shot Drifter) approaches Monster Party’s outlandish material with a different approach than to that of the aforementioned. A majority of the film is conceived with Steadicam but there are a couple of really nice drone shots that do add some value. Highlights include a series of effective close-up shots and a few stylish edits to help particular events snap into gear. The audio track is clean and there doesn’t appear to be any obvious ADR (additional dialogue recording). The standout creatively speaking has to be Felix Erskine’s score. Most of the suspenseful moments are complemented by unnerving high-frequency strings, but there’s also the inclusion of a 90’s sounding synth track that kick things off nicely. Much of the development in Hoffmann’s film is pretty standard. That said, he does mislead you with a couple of pieces of dialogue regarding what might be in the basement of the house. A component of that comes into play at the start of the third act and that does give the film a little more edge (even if there’s seemingly no explanation for it).

The bulk of the performances in Monster Party are more than competent, but certain actors are somewhat underutilized. Whilst I didn’t really buy Iris and Dodge as a couple, they delivered their action content quite well. The Dawson family (whose house it is) consist of strong but silent, Patrick (McMahon), his wife Roxanne (Tunney), and their two teenage kids Alexis and Elliot (played by Moriarty and Lawley respectively). It’s clear that both Patrick and Elliot have an appetite for the pursuit and you just know that something is slowly stirring beneath the surface. As for mother and daughter, Roxanne remains a bit of a mystery, though Alexis becomes a key player throughout the momentous festivities. Reddick’s, Milo appears to be the only one of the guests with a level head and Diego Boneta’s character Ollie proves to be one of the most interesting. Unfortunately, aside from one heated interaction with Cameron (Rushing) his screen time is limited to just a couple of reactionary shots. Instead, we get stuck with the overt asshole yuppie pairing of Cam and Jeremy (Jamie Ward) while tensions mount in the house. Their performances are okay but the characters maintain the one-dimensional status quo regarding the wider publics pre-conceived notions of the rich and famous. I’m sure in reality there’s more than meets the eye with the people living that lifestyle. The practical fx work on display in Monster Party is of a high standard. The first kill is the most sudden and it’s extremely violent – showcasing plenty of blood spray and setting the tone for the remainder of the film. Other kills involve a graphic death via samurai sword, a swift gunshot, and one characters sporadic use of a chainsaw.

On occasion some of the lighting methods in Monster Party clash (or have no reason to be), but it’s really the overall presentation that I found lacking. Cinematography style is purely a personal preference issue (so no doubt some will like it more than I did), but after witnessing Hoffmann formulate a much more cinematic approach to his debut feature, I can’t help but feel like this particular delivery was a step backward. I thought some of the focus timing was a little odd, the slow-motion feels overused, and as much as the dizzying camera work coincides with the manic action, it doesn’t make for easier viewing. Deml’s guilty of a lot of mid-shot zooming and it does become distracting, particularly during scenes in the hidden room (seen in the image above). The writing is another aspect that felt superior in Chris’s previous film. Sections of the dramatic dialogue are lazy and either just rely on profanity and pointless insults, or the mandatory “Come out so we can kill you” threats – the latter of which I’ve never really understood. Doesn’t it seem like a moot point? Has there ever been a time where the killer has said to the victim come out so I can kill you and the victim actually has? There has to be a more effective way to build suspense than that. Sadly, Monster Party lacks almost all surprise because it tells you everything you need to know in the synopsis and trailer (and like me, most will have looked at it). What’s worse is that an introductory scene to the Dawson family (of which could have been cut) further foreshadows the central plot twist. I think Hoffmann missed an opportunity to create another layer of infighting had Ollie put his guitar to good use on loudmouth, Cameron – I was waiting for it. Casper and Iris each have moments where their reactions/actions (or lack thereof) don’t fit the scene. Strike really doesn’t offer up much emotion, nor is the character overly sympathetic. He never has that breakdown moment required to complete his arc and to make sense of the resulting transformation. With the group witnessing some pretty gruesome stuff along the way, the “trophy” room shouldn’t come as a surprise, right? Well, that’s exactly what it takes for Iris to finally realize the severity of the situation. The non-sensical ending sees random strippers being slaughtered in an attempt at some dark comedy akin to something like the closing scenes of “Cheap Thrills”, but in this case, it just doesn’t work.

After impressing with the post-apocalyptic grittiness that was Drifter, I had high hopes for Chris von Hoffmann’s take on the home invasion trope with Monster Party.  Unfortunately, it just didn’t reach the lofty heights I’d hoped for. The premise is familiar but fun just the same, the edit is snappy, and the synth-driven score is impressive. On the plus side, A majority of the performances are decent, the script contains one or two interesting pieces of the puzzle, and all of the on-screen violence and practical fx work looks top notch. Too much is too obvious right off the bat though – a direct result of foreshadowing and the overly descriptive synopsis. The cinematography style wasn’t for me, some of the lighting looked patchy, and there appeared to be a lack of cohesion between those technical elements. The writing could have used some work and characters reactions don’t always make a whole lot of sense. Casper isn’t the strongest of protagonists, made worse by the fact that Sam just doesn’t present a whole lot in his demeanor. Horror fans and those of the home invasion persuasion are likely to still enjoy this one and maybe find a little more in it than I could. It’s certainly worth a look for the kills and practical fx which are a lot of fun, I just wish there was a bit more to it. You can check out the official trailer below and Monster Party is now available on DVD, Blu Ray, and various streaming platforms!