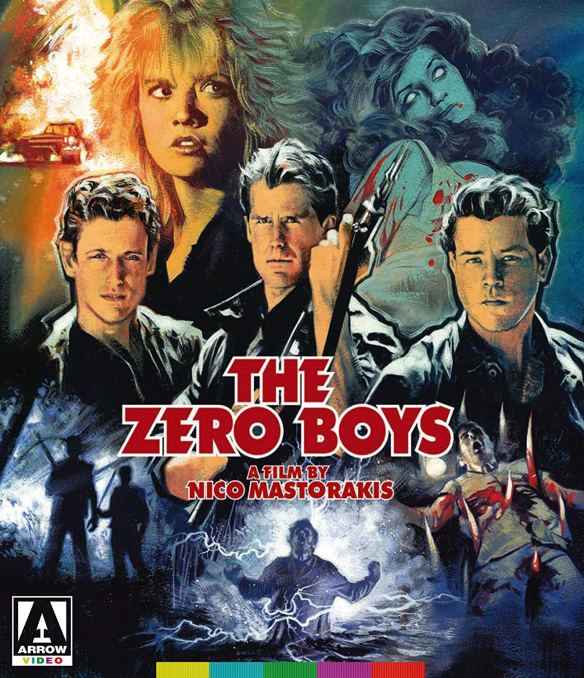 UK distribution company “Arrow Video” have been in the game since 1991. They’ve been responsible for some of the best film restorations in recent times and I never miss an opportunity to pick up more new content from them. Arrow takes the old negatives, tidies them up, color corrects them, and jam packs the releases with new features and interviews etc. The 1986 backwoods style Horror/Thriller, “The Zero Boys” was given the same treatment and it was recommended to me by a friend. The Zero Boys is a genre mash-up about war games that go wrong. The zero team is headed up by the ultra-competitive, Steve (played by Daniel Hirsch) and consists of his two buddies, Rip (Jared Moses) and Larry (Tom Shell) who spend their days playing elaborate survival games in the wilderness. After celebrating a fresh victory, of which the prize being young psych student Jamie (played by Kelli Maroney), Steve, the boys, and their respective girlfriends all head off for some downtime but unknowingly find themselves in an authentic kill or be killed situation. Zero Boys is Co-Written and Directed by Nico Mastorakis (Island Of Death), and also stars Nicole Rio (Sorority House Massacre), Crystal Carson (TV’S Dallas), Joe Estevez (Samurai Cop 2) and Gary Jochimsen. 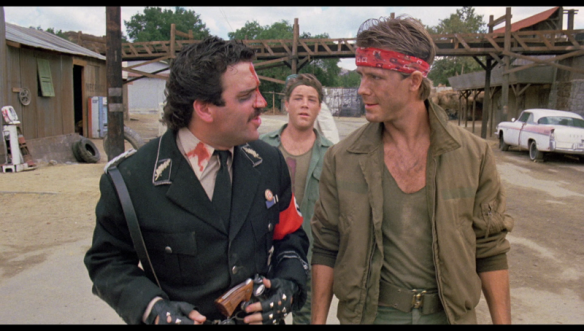 This 4K transfer of Zero Boys is incredibly sharp, though having never seen the film in 35mm or the heyday of VHS, I can’t make a full comparison. That said, if I was betting man, I’d say that this print is as good as the 1986 cut will ever look. Almost all the imagery looks clean, and the sets being laced with rain and fog certainly adds an element of charm to the proceedings. DP, Steven Shaw (who had previously worked as an AC on Spielberg’s E.T) carries out some really fine Steadicam operating and utilizes some effective high angle shot choices. The clean and loud audio and fresh master both do the film a huge service. I’m sure that chunks of the dialogue were re-done using ADR (additional dialogue recording), but in this case, it doesn’t make the result any less rewarding. The brandishing and chopping sounds of the killer’s machete are one of the standout features of the sound. Both Stanley Myers, and much-lauded composer Hans Zimmer (Black Hawk Down and The Dark Night) are credited for the surprisingly impressive score on display in The Zero Boys. Zimmer has since become one of the most sought-after people in Hollywood but ZB is one of a handful of the places where he honed his craft. The opening theme is interesting, balancing high-frequency synth with a military march tempo to match the setting of the film. The style of synth becomes more energetic as the film progresses. Myers was responsible for all the suspenseful themes involving the bass, cello, and violin. The best theme comes in a scene that sees Trish (Carson) enter the bathroom to clean herself up only to encounter one of the killers. It’s very Hitchcockian in nature and delivers on the suspense front. I got a kick out of Nico’s nods to both iconic characters “Rambo” and “Jason” (from the Friday The 13th franchise), those were a bit of fun. Some of the cheesy disses spouted between characters provide a number of amusing moments too. 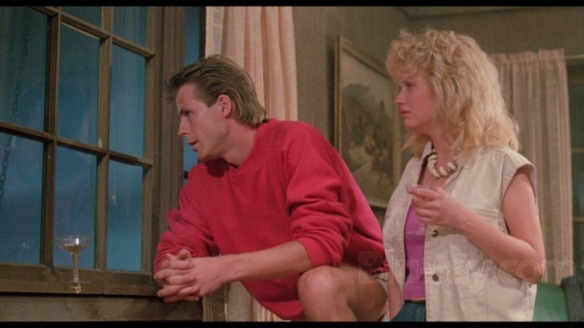 The introduction to The Zero Boys is one of the most entertaining ten-minute sequences in 80’s horror. The trio and their arch-enemy Casey (played by John Michaels), play up the significance of their on-going rivalry something fierce. The 80’s were undoubtedly a simpler time, at least they must have been for Steve and his pals. The proof is in the pudding, in the sense that the appeal of approaching college life and an opportunity for greener pastures would surely outweigh the trivial bragging rights of besting your peers in juvenile war games, wouldn’t it? Well, no, apparently it doesn’t (haha). This innocent game appears to be the most relevant thing in their lives, and I suppose that’s both a happy notion and a sad one. If I measure the characters and quality of the performances here against those in John Carpenter’s infamous slasher film “Halloween” (which came just 8 years earlier), it’s not even a question as to which is better. I believe the budget’s for both films were similar and those who know me know that I’ve been quite vocal about both characterization and acting in the latter film. The arcs were purely one dimensional and the performances lacked the required emotional reactions. Whereas each of the characters in The Zero Boys is first and foremost likable, and though the stereotypes are present, they’re never overstated. Even with Steve’s hot-headed persona, he’s smarter than he lets on (despite voluntarily emptying his magazine at nothing), and Rip’s humor is pure, never mean-spirited. With Larry, the pretty boy looks make him seem like he doesn’t quite fit, so it’s an interesting inclusion to the team. As for the women, they all sport those big hairdo’s. Jamie has a tough exterior and doesn’t pretend to be something she’s not. Sue and Trish are both quieter types who offset their respective boyfriends. None of them are overly annoying or stupid, and consequently, the performances they turn in are pretty good. The threat of violence is ever-present but there’s not a lot of it on-screen. However, one eventful kill does take place during the third act and it includes some practical blood effects.

The only weakness in this brand new transfer of The Zero Boys is the lack of grain management in some of the night exteriors. Ninety percent of the film looks vibrant and illustrates complete clarity, but there are a few scenes guilty of inconsistent resolution efficiency. As I said, the performances are much better than one would expect from a genre film from this time. A handful of lines do feel a little scripted as the film intensifies, resulting in some rather weak delivery. The Zero Boys isn’t without a few obvious continuity issues and some lapses in credibility regarding the writing. Steve and Larry reference a girl from a videotape they watch in the barn, yet none of the other girls ask any questions about it. The same thing can be said about the girls discovering a body in a trunk and expressing virtually no reaction to it. I suppose Trish does spontaneously vomit, but the other girls give nothing. I expected at least some screaming or calling out to the boys for help. In the aforementioned barn scene, Steve and Larry proceed to shoot the shit out of the timber door because there’s a lock on it (one that mysteriously wasn’t there the frame before). Do you know what an Uzi would do to wood? It would completely shred it. Needless to say, the boys enter the barn with the door completely intact and the lock gone. What’s more, they recklessly empty countless magazines all over the barn despite not knowing how many killers are really out there. I’m sure you’d look to conserve ammo and not waste it. The highlight of the film action-wise (involving a pitfall), doesn’t end up holding much integrity. I’m almost sure I saw the entire group walk over the area the hole was in during the prior shot of Sue falling in (it’s also in plain sight might I add haha). Not only is it not covered, but it’s also shown to be so shallow that you could climb out of it on your own. The one thing hindering the re-watchability factor of The Zero Boys is its lack of action and blood and gore. 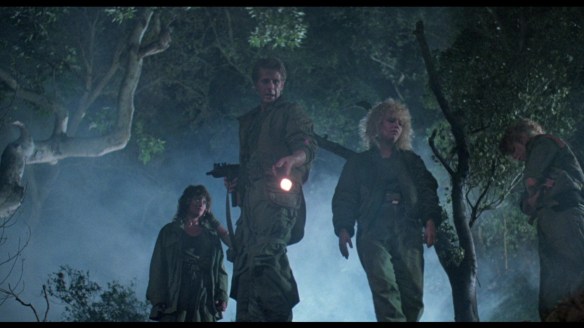 The Zero Boys is another solid Blu Ray release from Arrow Video. The film is more of a backcountry thriller than it is a horror or slasher flick. It’s in the vein of “Hunter’s Blood” (coincidentally released the same year) or the underrated “The Backwoods”. There’s even a touch of something like “Blood Games” about it, just replace the softball team with a bunch of paintballers instead. I couldn’t have been more impressed with the overall transfer. The cinematography is nice, the sound is crisp, and the Zimmer/Myers score is fantastic and helps drive the suspense. Most of the comedy is upbeat, the film references are fun, and the opening scene dives straight into the setup. Excusing a few flatly delivered lines, the performances are all pretty even and the characters are surprisingly appealing. The night exteriors could’ve used a little more work during the restoration process. I suppose some of the continuity stuff could be deemed artificial given the type of film this is, but characters reactions and actions during crucial moments don’t always add up. The aspect that lets the film down is that it’s almost void of action. Mastorakis stated in a feature interview that it wasn’t intended to be that type of high body count film, fair enough I suppose. Though when you set up the story with 6 or 7 characters and call it a horror film I’m expecting multiple deaths, and I didn’t get that. Still, there’s a bunch of things to really like about The Zero Boys and 1986 was a damn fine year, the year of my birth in fact. I can definitely recommend this one to fans who like these types of Horror/Thrillers. You can check out the official Arrow trailer below!