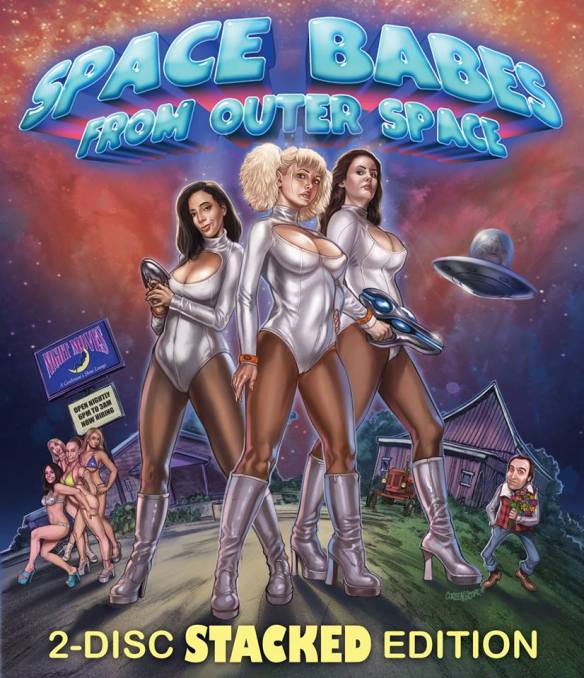 Bought to you by Bandit Motion Pictures and Writer/Director, Brian K. Williams (Time To Kill) comes the Sci-Fi/Comedy film, “Space Babes From Outer Space”. This is a review of the Region 1 (U.S) Blu Ray. Space Babes From Outer Space follows the intergalactic travels of a trio of space women, Carrieola (played by the lovely Ellie Church), Vanassa (Allison Maier) and Ragyna (Alyss Winkler) as they’re forced to land on planet Earth after evading their deadly enemies, the Scrotes (voiced by Shane Beasley and Arthur Cullipher). On arrival, they meet a lonely farm boy named Charlie (played by Brian Papandrea) and discover sexual energy is what’s required for them to refuel their ship and get back home, and thus, sex and comedy ensue. The film also stars Jason Crowe, Josh Arnold, Jason Hignite and Brigid Macaulay.

Space Babes is my official introduction to Atlanta-based film maker, Brian Williams despite having a bunch of films in my collection that he’s worked on in one capacity or another. Working closely with the likes of Scott Schirmer (Found and Harvest Lake) and James Bickert (Frankenstein Created Bikers), they’re a tight-knit group of artists in the industry who’ve gathered somewhat of a following over the last few years. A successful indiegogo campaign aided in this latest film from Bandit Motion seeing the light of day, so let’s get into this release. How about that glorious title and cover art, aye? On the behind the scenes featurette Williams reveals that the name was just something that came to him one day. He saw it as potentially marketable, and from there he couldn’t get the idea out of his head and that’s how it ultimately came to fruition. I’m a sucker for hand drawn artwork and this particular design highlights exactly what you’re in for. The opening credits look great and the film even has its very own ridiculously fun theme song aptly titled, “Space Babes” performed by John Niespodzianski. It’s a synth orientated track with vocals reminiscent of something from Scottish rock band “Simple Minds”, very 80’s in nature. I also like the sweet piano ballad that becomes the theme for Carrieola and Charlie. There’ some creative animation employed by Martin Trafford in the beginning, it gives amusing insight into the babes back story, and simultaneously highlights us men as being a carnal bunch and not the deepest, emotionally speaking (something that has at least some truth to it for some I suppose). This is just Schirmer’s second time behind the camera and not only does he do a solid job with the framing, he keeps the shot choices simple, allowing for a snappy edit (which he and Williams collaborated on). There’s good audio as well as some of the best riff driven rock tunes I’ve heard in a while. Songs like “Two is Better Than One” and “Hot Medicine” from the band “Stackhouse” will have you rocking out with your…. well, your you know whats out.

I want to talk about the production design of Space Babes From Outer Space, because no matter how you spin it this type of film is usually a tough sell. Williams and his production design put a concentrated effort into making key elements of this feel as real as possible. The spaceship might be a makeshift concoction, but the intent is still there and that often wins a lot of respect from fans of low-budget film making, it also shows other amateur film makers (like myself) what’s possible on very little money. The inside of the ship sparkles just as you’d expect it to, the design boasts levers and controls, flashing lights and a cockpit window. Not a lot of time is spent inside so audiences don’t have time to pick it to pieces, smart decision. The girls costumes fit snug and certainly highlight the intended areas amply. The other worldly “Scrotes” (a term which I can only assume was coined from the word scrotum haha) are made up of a poly Styrofoam that was textured and sprayed and then the respective actors would get inside them and walk around on their knees. They don’t always look great but the fun cheesy b-movie touch has a certain charm to it. Space Babes From Outer Space makes no apologies for being raunchy in its objectification of women (and to a lesser degree men). I’m sure these actresses are well aware of what they’re involved in, nudity and showcasing attractive women being one of the companies mainstays. The film introduces our three leads (with character names that conveniently all sound like parts of the female anatomy) by showing them all in bed together naked. We’re then treated to suggestive slow-motion dance numbers from each of them, scenes that one can liken to that of Benny Benassi’s film clip for “Satisfaction”, you remember, the one with the half-naked girls operating jack hammers in slow motion? (god those were the days). Don’t get me wrong, I’m all for it. After all, I’m a man. I like good eye candy, I like to admire the wonder that is women but it is harder to be taken seriously, that much is true. Though some would argue is that really what I’m seeking with a film called Space Babes From Outer Space?

The performances in Space Babes From Outer Space surprised me. Usually these kind of low-brow toilet humor orientated comedies don’t lend themselves to actors with much talent, but such is not the case with Brian’s film. I’d previously only seen Ellie in the aforementioned “Frankenstein Created Bikers”, and despite liking the opening of the film (that involved her) I really wasn’t a fan of the style in general. Here she gets to do plenty more dialogue-wise, and of the three characters, Carrieola is the most well grounded. Allison and Alyss share a number of scenes and they have pretty good chemistry, evident during those interactions. Vanassa is responsible for the decision-making and Ragyna is molded as the slightly naive younger sister type. All three girls are gorgeous and carry the movie well, relying mostly on confused and vacant looks to convey not knowing the ways of the women of earth. Brian Papandrea, who I must say bears a striking resemblance to Sacha Baron Cohen (Borat), or rather his character does (with those horrible sideburns and all the chest hair, god I hope it’s not real dude haha) is the only male that could be considered a lead. So despite this being very much a male orientated film, women actually dominate the show. Papandrea doesn’t overdo the country boy shtick and he has some standout moments. There’s a lot of sexual innuendo throughout Space Babes, some of it works and some of it doesn’t. The way in which Crowe’s character, “Wet Willy” (the name should tell you what you need to know) continues to cop it physically over the course of his night in the strip club, is funny, albeit rather disgusting. Maier and Winkler deliver the funniest and perhaps most understated back and forth in the film, resulting in the line “No matter how long, hard, short or mediocre the journey is” but it’s the lead in from Papandrea talking about nicknames for erections that makes the line as good as it is.

As I’ve come to expect in independent film making, not all of the technical specifics are perfect. The lighting is a little harsh in places and some of the space content looks to have been conceived with fairly cheap CG. The saving grace is that Williams limits the amount of screen time spent with those devices, doing just enough to give reason for the babes to set course to Earth. There’s a couple of brief moments that showcase a little blood and some practical fx work but don’t go in thinking you’re going to get more on the action front, because this is mostly comedic in nature. I’m not sure it matters if Space Babes isn’t period specific. A glance at some of the costumes suggest it might be the 70’s (as seen in the image above), and I don’t recall seeing anything modern, but who really knows? A couple of overly lengthy scenes involving boob shaking during the finale (I know, why am I complaining right?) but more notably, a dinner table sequence with Carrieola, Charlie and his family, backed by an odd laughing track, were the weakest parts of the film. The quick run time of just 75 minutes (excluding credits) makes it feel as if a couple of these scenes were written simply just to get the film up to feature-length. Every piece of crass dialogue or gag during the dinner table fell completely flat. The father character was overbearing and pretty vulgar, he just wouldn’t shut up and the profanity seemed really forced. The only fun from the scene comes in the form of an easter egg popping in from one of Bandit Motions other films. That whole scene could have been cut though and the film wouldn’t have lost anything. Other chunks of dialogue from Grandpa were weak, as well as the introductory working girl talk at the club that sees Danyelle (Sadie Tate) and others discussing the guys sexual fetishes. The bodily fluid stuff was a little much for me in places too. 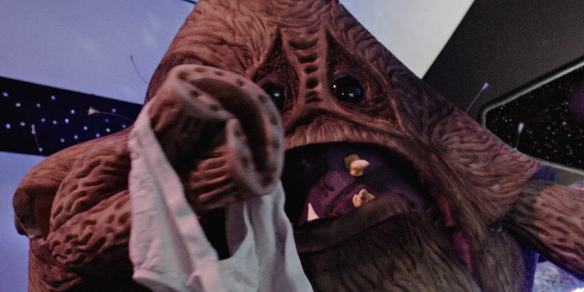 Bandit Motion Pictures have made a name for themselves over the past four or fives years, mostly through social media and their ability to garner strong support for their films. Having only really worked in the parameters of Horror/Thriller and Drama, Space Babes From Outer Space is an out of left field departure from the content they’d usually produce, but the end result is still a surprisingly good one that happens to pay nice tribute to the Sci-Fi, B movies of years gone by. It feels like a little bit of “Spaced Out” and “Barbarella” by way of the rambunctious, “Porky’s”. I love the title, the theme song and the artistic artwork. The cinematography is serviceable, the audio is good and the soundtrack is a nice mix of piano ballad, synth and rock. The production design is earnest, the costumes are dazzling and the actors are all committed to the cause. Brian’s script doesn’t shy away from the sexual wordplay, the fetishes or an incessant display of attractive and topless women (and they’re certainly both). Personally, I don’t think it all works but it depends on your expectations. There’s a few long-winded scenes that did absolutely nothing for me, Williams opting for cheap and nasty one liners or anecdotes. There’s also a few shortcomings with CG and lighting , that and I’d hoped for some more effects and a bit more action. I’m not all that well versed in the “sex comedy” so I don’t have much to compare this one to, but if you’re looking to be entertained for 75 minutes this will more than get the job done. You can check out the official trailer below and purchase the film from the Bandit Motion Pictures website. Keep an eye out for Brian’s latest film “Amazon Hot Box Women” which is coming soon!

My rating for “Space Babes From Outer Space” is 6/10