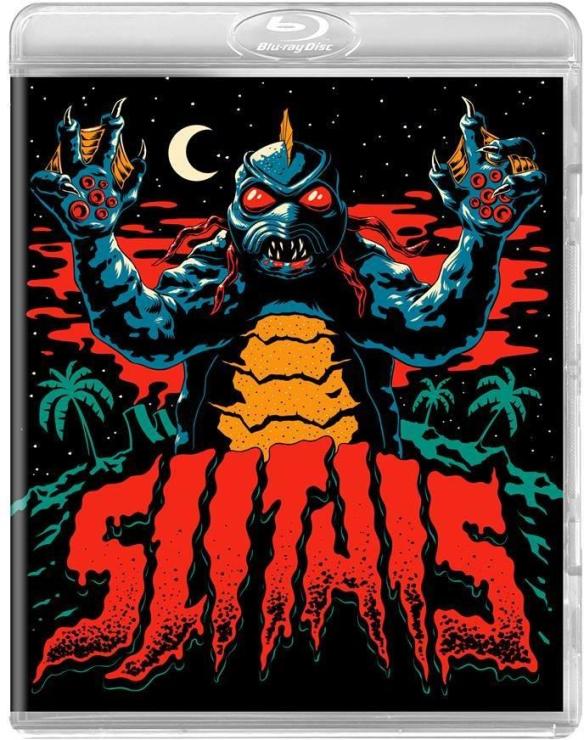 This is a review for the brand new Blu Ray release of the 1978 Horror/Sci-Fi creature feature “Slithis” aka “Spawn Of The Slithis”, Written and Directed by Stephen Traxler. Slithis is set in Venice, California in the wake of a nuclear leak that sees the towns people come under threat by a mutant sea monster. Journalism teacher, Wayne Connors (played by Alan Blanchard) and his wife, Jeff (Judy Motulsky) with the help of a scientist, Dr John (J.C Claire) try to stop the Slithis before it attacks again. The film also stars Dennis Falt, Mello Alexandria, Hy Pyke and Win Condict. I hadn’t actually heard anything about this late 70’s, low-budget B movie (coincidentally Traxler would only go on to direct one more film) but I’m always down for an old school creature feature. The catchy artwork and new limited edition print looked appealing so I picked up a copy (at a hefty $53 might I add!). 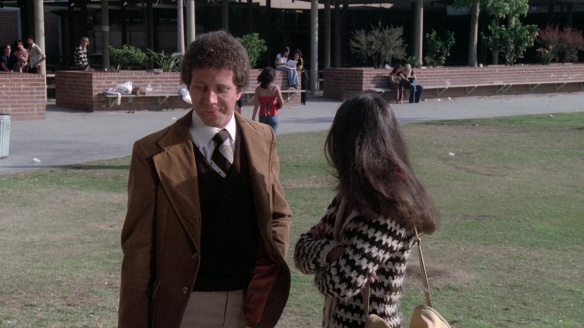 Despite the age-old saying “Don’t judge a book by its cover”(or in this case film), the artwork and the complementary slip cover are a big part of the reason I purchased the film. Clearly inspired by the likes of Jack Arnold’s ground breaking, “Creature From The Black Lagoon” and Spielberg’s 1975 box office hit “Jaws”, Traxler saw a market and perhaps a way to cash in on the creature feature phase of the time. The issue for him was that those two particular films were big money productions, Slithis was made on $100,000. Other than the original VHS release, prior to 2017 the only other version of this little known Sci-Fi venture was a dvd that by all accounts was a less than stellar product. The transfer on this disc is excellent and it automatically boosts DP, Robert Caramico’s cinematography (Eaten Alive and Star Crystal). The monster POV (point of view) shots actually pre-date John Carpenter’s use of the same technique in “Halloween”, released in the same year. You get that 70’s/80’s obligatory dramatic zooming, simple two-shots and steady camera operating throughout the entire film. The new cleaned up audio track is another great addition of this release. Minimal hissing with a filter placed on background noise sees that facet improved ten fold from the previous version. 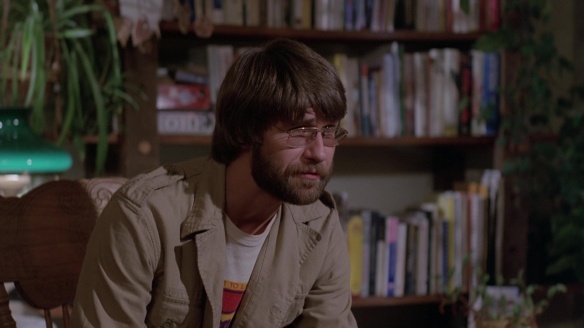 Steve Zuckerman’s score is perhaps the most enjoyable aspect of the films creative components. There’s a concentrated emphasis on the music being a character in its own right. The quirky themes in the opening are reminiscent of some of Howard Shore’s work (Panic Room, The Game, Dead Ringers), who interestingly enough started composing around the same time as Zuckerman (though Shore has had the far superior career). The use of french horn and cello seems to give a lot of life to Slithis, and at times the quality of the score rivals other wonderful artist like John Williams (Jaws, The Poseidon Adventure and ET). Actor, Alan Blanchard was criticized for being a rather dull leading man. Now maybe there’s something in that considering that he never acted again after Slithis, but I personally had no problem with him. I thought Wayne’s decision-making was consistent and ultimately Blanchard, in spite of his rather one-dimensional arc, put in the most natural performance of the lot. Motulsky does her bit, playing the concerned wife who just wants to stay out of the controversy surrounding the cover up. Most of the remaining players are serviceable as well. 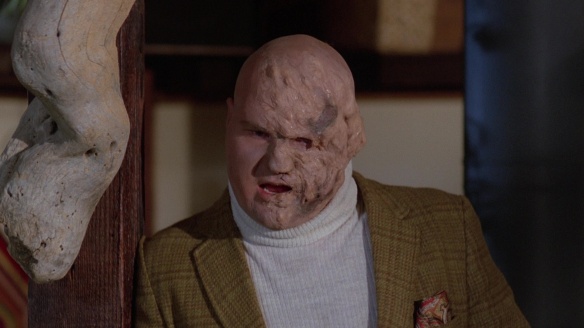 J.C’s character serves as the sole provider regarding exposition on the “Slithis” and the history behind the nuclear reactor leak that contaminated the nearby waters. We’re given plenty of detail (perhaps too much) on how the bacteria and algae mutated to form a new organic life form. It’s your typical by the books dissection of everything that’s led up to that very point, but a welcomed addition to the storytelling none the less. Penny Gottlieb and Kathy Lober credited with makeup and special effects, deserve some recognition for their quality work conceived with extremely minimal funds. The makeup for Dennis Falt’s facial deformities (as seen in the image above) looks great and the practically conceived Slithis suit (worn by Condict) was well ahead of its time. The look and sound of the creature works surprisingly well and is ultimately a lot more effective than most of the CGI utilized today. The focal point of the action is an impressive car crash stunt, and the use of some vibrant practical blood and gore to depict the aftermath of certain kills was a highlight too. 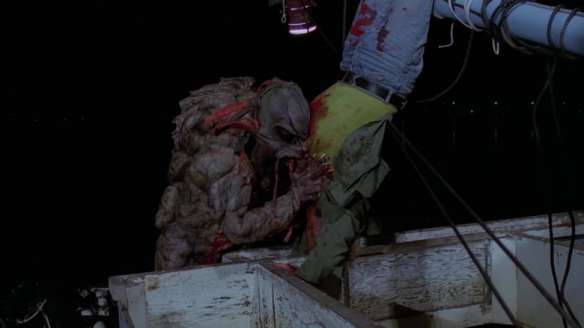 Robert Ross’s edit and Stephen’s overall sluggish pacing are the biggest setbacks here and consequently that hurts the rewatchability factor of Slithis. There’s a series of pointless slow motion shots in the beginning of the film as two kids play with a frisbee by the canal. Later, a sleazy older man picks up a young student at a bar during some turtle racing competition (haha yes you heard me right), not to mention there’s a good 35 to 40 minute stint in the middle act where there’s simply no action to speak of, and in a film that should be all about its creature presence, that’s problematic. That lack of a body count or on-screen carnage is surely going to disappoint viewers who are looking for that kind of fix. Instead, you’re in for long-winded sequences like the one that involves a homeless man who goes by the name “Bunky” (played by John Hatfield), who sits around talking with another boozer buddy about how all the women they’ve known are “whores” because that’s what it was like in Vietnam (you know because they’re both vets and all that). The sequence lasts twice as long as it should’ve and there’s no visual pay off at the end of it. There’s an attack sequence involving an elderly couple but it’s weakly presented with absolutely no reaction from actress Daphnae Cohen as she comes face to face with the monster. Traxler abandons his leads for a lengthy portion of the film to focus on irrelevant side plots too. On an unrelated note, Hy Pyke’s performance as a head police officer is embarrassingly bad, thankfully his screen time is limited. At least the climax of the film is entertaining as Wayne and his scuba diving friend, Chris (Alexandria) are on a boat face to face with the Slithis as others try to assist from the shore. Though one can’t deny the complete lack of originality, given that most of the scene is practically lifted straight out of the aforementioned “Jaws”. 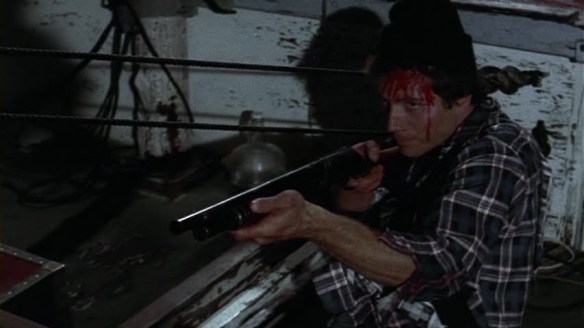 Slithis may not have been the most original idea but it certainly helped pave the way for the creature feature sub-genre and some of the films that followed, such as “The Being” and “Humanoids From The Deep”. I knew very little about this one but it’s great to see a 40-year-old film getting this sort of restoration from Code Red. I love the title and the vibrant artwork and packaging. The cinematography looks great, the audio is clear and Steve Zuckerman’s score might just be the creme de la creme when it comes to music in this particular genre. Most of the acting is decent and there’s ample discourse on the origin of the monster. The practical effects and stunt work are both well ahead of their time I just wish there was more of it. The pacing is far too stagnant, sizeable chunks of the film feel lifeless and there’s simply just not enough action to demand multiple viewings. Pyke’s performance is cringeworthy (I’m not sure how people could see it any other way) there’s some poor dialogue in places and a handful of scenes could’ve used a re-cut. In the end, Traxler’s script specifics feel a lot like those in the far more successful “Jaws”, so if you’re looking for 70’s creature caper you’d be wiser to revisit the infamous latter. If you’re one of those viewers that places stock in pure aesthetic appeal I can’t think of a better way to go than this new and improved version of Slithis. You can check out the trailer below though it’s for the original 1978 release and not the Blu Ray, so keep that in mind!