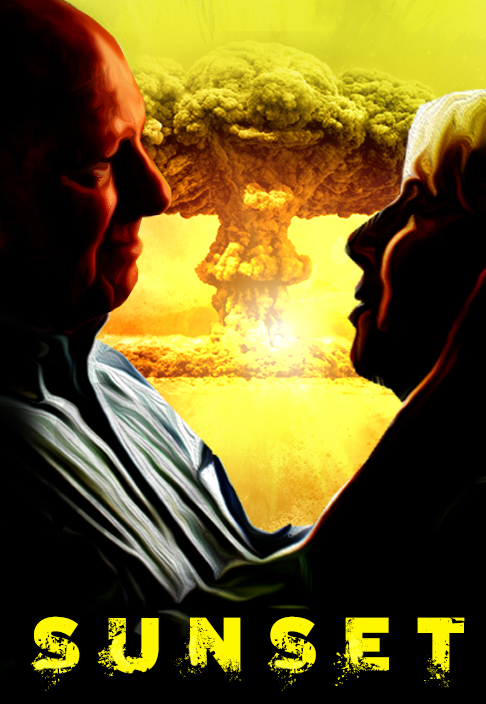 Firstly, I’d just like to say thank you to Halcyon Valor Productions and Co-Writer/Director, Jamison LoCascio for allowing me early access to an online screener of his second feature-length film, “Sunset”. Sunset is a drama that focuses on a group of six individuals living on the East Coast of the United States, who are forced to make life or death decisions after hearing of an impending nuclear strike set to hit the surrounding areas. Elderly married couple, Patricia and Henry (played by Barbara Bleier and Liam Mitchell) are dealing with her declining health and some of their unresolved issues, not to mention their somewhat slow boarder, Chris (David Johnson) whose become a sort of self-proclaimed son to them. Then there’s Breyanna and Ayden (Suzette Gunn and Juri Henley-Cohn), a young couple who’ve been unable to conceive and are seemingly incapable of reaching a decision regarding the imminent threat. Rounding out the group is Julian (played by Austin Pendleton of HBO’S “OZ”), a long time friend of Patricia’s whose partly the cause of some of the friction between her and Henry, who Julian often butts heads with.

Sunset takes a rather simplistic approach to its end of the world scenario. Okay, well maybe it’s not the end of the world, but certainly the destruction of the east coast of America. For a majority of the run time LoCascio hones in on developing his characters in realistic an interesting ways. There are no flashbacks or spoon fed admissions, it’s all about what the scene calls for in any given moment. Sunset’s an independent film but don’t let that fool you, the technical aspects are all very well conceived. Nicholas Pietroniro’s camera work is simple but solid. A majority of the shots are nicely framed, there’s some early glide-cam footage and the handful of aerial shots overlooking the suburb, in turn raising the production value overall. The audio track is consistent and clear and the scenes transition quite smoothly as the event nears. Adam Ambrosio (who co-wrote and produced) also composed the score, and it’s quite a good one. A synth piece opens the film and the remaining score helps to evoke the tension within the crisis itself. One could criticize Sunset for perhaps being a little to talky, especially if you go in expecting something more along like the lines of “Right At Your Door” or “Take Shelter” because this is not really that sort of film. I found early interactions between Henry and Julian covered important topical discussions on the art of war and the current state of affairs in the world. Like any good conversation, Jamison and Adam cover both sides of the argument in the writing. In hindsight, it’s easy to see the why behind Henry’s knee jerk reactions to the subject, while Julian approaches things pragmatically and with more in mind than winning. Each of the performances are solid and everyone has their moment to shine. The stand out display comes from Johnson, as Chris, who bares all (emotionally speaking) to record a video for his YouTube channel. There’s some rewarding developments in the third act and I particularly respect the films abrupt ending.

Most of the cinematography looks good but there are a couple of odd framing choices during a dining table scene with Chris and Patricia, and later, in the car with Chris and Henry. I might have opted for a two-shot during the first, and a medium close-up from the hood of the car for the latter (but hey it’s all personal preference). There’s one passage of dialogue (spoken by Ayden if I recall) where he says something along the lines of “More smart about staying there”. I don’t remember the exact line but the phrasing didn’t make a whole lot of sense. Barbara’s performance hits most of the intended beats but I was a little distracted by her constant strained facials, though that could be down to the character’s manner I suppose (it was unintentionally funny though). Julian was the one character that felt somewhat out-of-place in the film. I can see reasons as to why you might figure him into the relationship dynamics between Patricia and Henry, but he wasn’t crucial to anything that transpired among the others over the course of the film. If I’m honest, there were times where Chris was a difficult character to watch. Described by Henry as a “bizarre man-child” (more than accurate), he’s almost cartoonish in nature, as if actor David Johnson was giving his best Chris Farley impersonation. Now, that’s not to say he’s not good, it’s just that sometimes the portrayal gets a little overbearing. On the flip side, his innocence and lack of worldly know-how makes him loveable just the same. I think had it been anyone else other than Johnson, I’m not sure it would have translated. I’ve never quite understood the rationale behind debating whether to stay or go in a life or death situation. Two characters here try to justify why staying put is safer when it’s clear that makes absolutely no sense. It’s a life or death situation. Leave and live or stay and die (or at the very least have a chance at survival). If you’re in the impact zone it’s a no brainer and there should be no argument. Yet these characters waste precious time debating what to do about it, it frustrated me to no end.

Sunset feels akin to the aforementioned “Take Shelter”, just without that element of paranoia and shot on a substantially lower budget. For the most part, LoCascio and Ambrosio’s simple character driven structure works for the setting. It’s a well shot film, it sounds good and there’s a lot of engaging dialogue throughout. The performances are all very even and I liked the developments of each character arc. Some of the framing could use a little sharpening and the pacing is a fraction slow at times. The Julian character doesn’t feel all that crucial to proceedings and the key questioning around whether to stay or leave will seem like a moot point to anyone with half a brain. These characters certainly frustrated me at times but never enough to make them unlikable or to deter one from caring about their fate. Below you’ll find the trailer for Sunset and the film will officially be available on Amazon, iTunes, Google Play and DVD from the 3rd of July.