Firstly, I’d just like to say thank you to October Coast and Uncork’d Entertainment for allowing me early access to an online screener of the Horror/Thriller film “Bad Apples”, Written and Directed by Bryan Coyne. Bad Apples is a home invasion style horror flick set on Halloween night. The Blocks, a young married couple played by Brea Grant (of TV’s, “Dexter” and “Heroes”) and Graham Skipper (“Almost Human” and “The Minds Eye”) have just moved across country for new job opportunities. Shortly after settling into their new place, they become the unsuspecting targets of a demented duo of sisters wearing doll masks and wielding serious weaponry. The film also stars Andrea Collins,  Heather Vaughn, Hannah Prichard and Richard Riehle.

Bad Apples is just Coyne’s second feature film and I can respect that he never once tries to pretend this is something other than what it is, home invasion caper. The home invasion sub-genre has seen countless entries in recent the years, more so since Bryan Bertino’s 08′ masterpiece, “The Strangers”, seemingly the home invasion film to which all others are measured against. Despite the common formulaic approach to them, there’s been some good additions in recent years such as “The Purge” and “You’re Next”, through to some of the lesser known indies like “Home Sweet Home” and “The Aggression Scale”. DP, Will Barratt’s (cinematographer from Adam Green’s films “Hatchet” and Frozen”) camera work is simple but solid. With his consistently good framing and shot choices, he gives Bad Apples a higher production value feel than the budget would suggest. The audio track is decent but it is a little low in places, most notably in the kitchen conversations between The Blocks. It appears Andrew Ceperley, (credited in the music department) is a man of many talents, having a background in animation and visual effects, camera work and editing (among other things). The low-end synth in the beginning of the film feels very 90’s, it was a good addition. There’s also a nice deep dark orchestral theme during the opening montage. The film relies mostly on clattering noises and sharp spikes in bass in order to generate suspense, doing so capably. 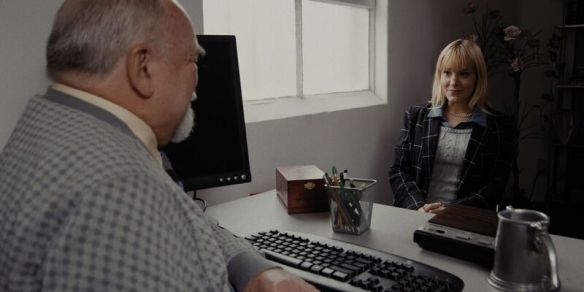 I didn’t know much about Bad Apples prior to watching it so it was a welcomed surprise to see Grant and Skipper together, even Richard Riehle in a small role as the school principal. I’ve seen and reviewed a couple of shorts that Brea has appeared in, one was a vigilante story called “Night Watch” by Director, Barry Battle (Baytown Outlaws) and the other, a super impressive 50’s themed short called “The Root Of The Problem” from Ryan Spindell. Grant’s got the Julie Benz kind of beauty going on and she’s inherently watchable. Same goes for Skipper (well maybe not the Julie beauty part haha… sorry Graham), I’d seen an enjoyed his work with Director, Joe Begos and particularly loved his brief but memorable screen time in what was perhaps my favourite film of 2016, Mickey Keating’s “Carnage Park” *see review* https://adamthemoviegod.com/carnage-park-review/. I think most viewers will agree that the couples performances are the best of the lot. Their characters are likeable and sympathetic and they have a natural back and forth that works. Although Bryan’s guilty of zigging when he should have zagged in regards to his characters arcs, he does make up for it by giving horror fans that fundamental first kill five minutes into proceedings. Those who know me know that’s a genre must, it gets audiences engaged nice and early. It’s a bloody first death and each of the remaining kills are conceived with impressive practical effects as well. The highlight being a series of rather graphic aftermath shots of a character who has been disemboweled. The asian style baby doll masks were a nice touch as well, even if they have become somewhat tiresome in modern horror.

Bad Apples wears its badge of independence proudly but feels like it lacks attention to detail. There are issues when it comes to the story and its lack of exposition. Picky things like the principal’s office looking like it was just a small room in someone’s house, I can usually let slide. Not to mention his desk being completely free of paperwork yet the guy’s a principal? Anyways (it’s all semantics). There’s also a handful of minor technical issues with the film too. Sound and lighting were both in need of some work. At one point the sisters use a gun but the muzzle flash effects, even from a distance, just don’t look right. Nor does the sound have the appropriate impact for such an action. The audio track is pretty clean, but the sound does clip on occasion, most notably where scenes abruptly cut (it could just be the screener version I watched). I’m rarely a fan of muted sound with impact hits conveyed through silence, much like a lot of what Bryan does with his action here. I understand it’s often down to either budgetary constraints or simply someone taking creative license, either way, I prefer the appropriate foley and sound bed to match the action on-screen. I wish when the sisters killed someone you could actually hear it. The issue is even further compounded when you have a scene like the one that takes place in the neighbours home, where on top of an absence of reliable sound everything is far too darkly presented as well. 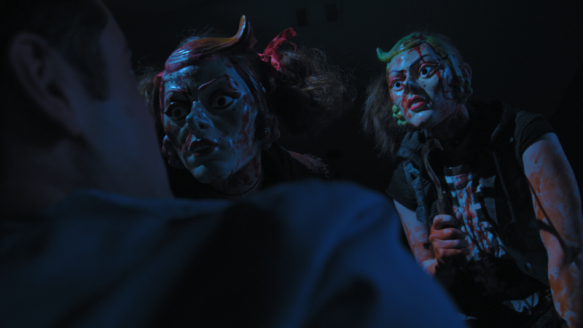 The two biggest shortcomings of Bad Apples are its complete lack of exposition and the fact that on multiple occasions characters completely downplay their reactions in response to serious events. The first comes from a secondary character’s reaction to discovering a body in the school. She musters up the faintest of squeals and then just shuts the door (unintentionally funny) as if the body will just magically disappear. Of course the gruesome discovery doesn’t make the local news of this small town either. Once shit hits the proverbial fan and Grant’s character evades the twisted sisters momentarily, she has the opportunity to grab a knife (that’s in plain sight might I add) Does she do it? Don’t be silly… that would make some sort of sense and in the world of a horror film we’re not about that sense. Even that, I can deal with though. What I can’t swallow is the reaction, or lack there of, from one particular character during the final act reveal. It’s not a case of bad acting, she’s clearly talented and had obviously been advised to play it a certain way, but how nobody on the set raised the question surrounding the level of believability is beyond me. Greater than all of that, is that for two-thirds of the film Grant and Skipper’s arcs appeared extremely one-dimensional. It wasn’t until a random third act reveal by Skipper’s character, which comes completely out of left field might I add, are we actually given something to go on in regard to the context of their makeup. Forget about the crazy sisters bred from violence, because unfortunately we don’t learn a single thing about either of these girls, so much so that I can’t even credit the actresses to their respective roles.

Bad Apples is a fairly paint by numbers home invasion film but there’s still fun to be had here for fans of the sub-genre. Barratt’s camera work is solid and Andrew’s dark score complements the violent material. I like the pairing of Grant and Skipper who deliver serviceable performances. The practical effects displayed are the highlight of Coyne’s film, particularly the graphic finish in all its crimson glory. There’s a lack of attention to detail in the lighting, set design and sound which of course limits the aesthetic appeal of this one. The biggest hindrance is the lack of exposition regarding all four lead characters, and that really hurts the film, that and credibility has to be called into question with several of those vastly indifferent acknowledgements from characters in regard to major events. You can check out the official trailer below! Bad Apples will be available on VOD (video on demand) from the 6th of February.