Firstly, I’d just like to say thank you to Writer/Director, Troy Escamilla (Party Night) *see review* https://adamthemoviegod.com/party-night-review-2/ for allowing me access to an early screener of his second feature film, “Stirring”. Stirring is a Christmas themed Horror/Slasher about a group of students who are celebrating the holidays by attending a party at a previously troubled sorority house, but they get more than they bargained for when a killer disguised as Mrs. Claus starts offing the guests. The film stars Hailey Strader, Billy Brannigan, Ryan Poole, Jantel Fontenot, Heather Bounds, Kaylee Williams and Brinke Stevens. Rewind twelve months and I was checking out self-proclaimed  horror fan, Troy Escamilla’s debut feature film “Party Night”. A “Prom Night” meets “The Mutilator” inspired independent slasher flick. It was a good time, an entertaining slice of genre filmmaking despite having some obvious budgetary hindrances and a few shortcomings. I’ve been following his latest film Stirring since that time and now here we are, so lets’ get to it! 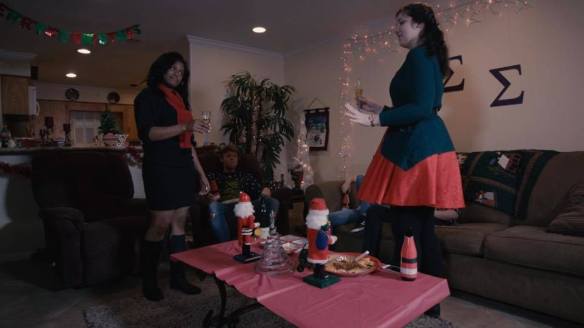 Much like Troy’s sophomore venture, Stirring has some really cool 80’s inspired poster art and the premise of the film closely resembles a number of other popular genre films, something Escamilla has no qualms about. I recall Party Night having a clean audio track, and the same can be said here. Though ninety percent of the film takes place indoors, audio can still be challenging having to contend with outside noise. Troy’s previous DP, Derek Huey returns with a simple but effective shooting style and a relatively smooth edit. While there’s not a lot of variation in techniques and shot choices, everything is still nicely framed and Huey makes use of gentle focusing to enhance things in the background. The score was composed by Mark D’Errico, a guy with over 15 years experience and a number of credits to go with it. There’s some lovely ambient piano and haunting vocal melodies hummed throughout the course of the film. My favourite theme is an extremely off-kilter divergence of the infamous christmas carol “Jingle Bells”, it plays to suspenseful effect. Stirring is rather light on the adult activity (compared to some slashers) but makes up for it with some impressive practical effects. That being said, there’s some brief nudity in the form of Sophie (played by Daiane Azura), the latest plaything of douche jock, Grant (Poole). 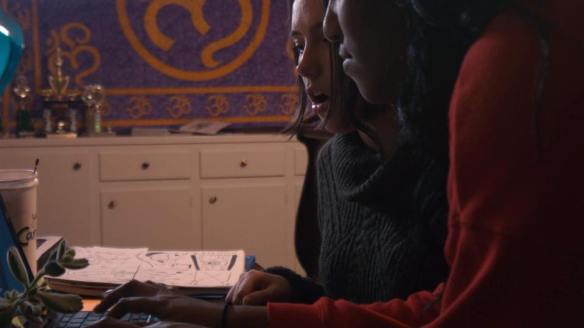 Members of the crew aren’t the only ones to have worked on Escamilla’s previous film. Stirring happens to be a Party Night reunion for all three male leads Ryan Poole, Billy Brannigan and Drew Shotwell. Their performances are a little more even this time around in spite of two of them playing unlikable characters. The interactions between Hailey and Jantel’s characters are some of the best acted scenes and I had a soft spot for Bounds’s character, “Kayla” because she was just all around pleasant and positive. The standout moment, at least emotionally speaking, comes in the first act where Mel Heflin’s, “Angela” , a new sorority sister whose being hazed, bullied and ridiculed has an emotional breakdown and it all just hits her at once. I thought Heflin’s crying felt natural and it set the bar for her peers in the remainder of the film. Troy’s script is fairly basic but he follows a few of the fundamentals of the genre, such as the inclusion of the first kill coming less than ten minutes into proceedings. It’s “Carrie” like in nature and showcases copious amounts of the red stuff, a memorable opening death to say the least. Stirring was made on a combination of crowd funding as well as Troy’s own financing, so while the kills aren’t always the most elaborate, they’re done with plenty of heart. There’s a cool neck piece prosthetic and a violent stabbing sequence, both of which are done with lots of blood and gore. To top it all off there’s a decapitation scene, and on this kind of budget that deserves props.

Most of the issues I found in Stirring were of a similar nature to those I found in “Party Night”. There’s the odd continuity fault and a handful of small technical things (par for the course with independent film making). I thought some of Huey’s framing was a little thin in certain scenes, I’d love to have seen a few more wide shots and not so many medium close-ups (personal preference of course). A majority of the lighting looks good but there’s a few conversations, namely the one between Kayla and Monica in the kitchen, where shadows appear to be bouncing off the wall and creep into the background of the frame when I’m sure that wasn’t the intention. The first kill was quite well conceived but it’s missing some much-needed foley for the impact, it sounds a little exposed with that blank mix. The depiction of a suicide via hanging looked a little amateurish, so to the close-ups on the machete during one particular action sequence (unfortunately highlighting it as a prop). I much preferred Brannigan’s character in this film compared to his respective role in Party Night, but I couldn’t help noticing that he looked quite ill throughout the film and that was somewhat of a distraction (not sure why). There’s a couple of obvious continuity lapses, namely when Grant advises Sophie to pack her stuff and get moving because he claims it’s going to be dark soon. A problematic passage of dialogue, because the audience has just witnessed them waking up, both look tired and the sun is clearly shining through the window. The other things is the sorority house itself. One can’t ignore that it’s clearly just a regular suburban house, barely fit for even 3 or 4 girls let alone enough bodies to be classified as a sorority (it is just a movie though so let’s not get too carried away). In regards to the dialogue, there’s a bit of immaturity about it, or maybe I’m just getting older and the asinine comments and stoner talk just so happens to get old even faster now. A three-minute conversation about getting stoned had me completely tuning out, but hey, each to their own.

Stirring is yet another holiday themed slasher film in the vein of “Silent Night Deadly Night” with the DIY approach of Todd Nunes indie slasher, “All Through The House” and even the more recent, “Lady Krampus”. I like the poster art, the audio is crisp and the cinematography is simple but smartly conceived. The score has some memorable themes and most of the performances are consistently good, the best work coming from Strader and Bounds with highlights from Heflin and Williams as well. The practical blood and gore is sure to satisfy genre fans, and although the deaths are rather generic, Escamilla makes up for it with a sizeable body count executed on a low-budget (see what I did there). There’s some technical inconsistencies and a couple of fairly noticeable continuity issues, that, and a few sizeable chunks of dialogue didn’t do much for me. I enjoy the cliché’s and stereotypes of the genre but the male characters in this one were almost exactly the same as they were in Party Night, just role reversals from Poole and Brannigan. In the end I think Stirring hits the same marks that Party Night did, and if you enjoy the specific sub-genre then you’ll have a lot of fun here. Take a look at the teaser trailer below and keep an eye out for this one soon!