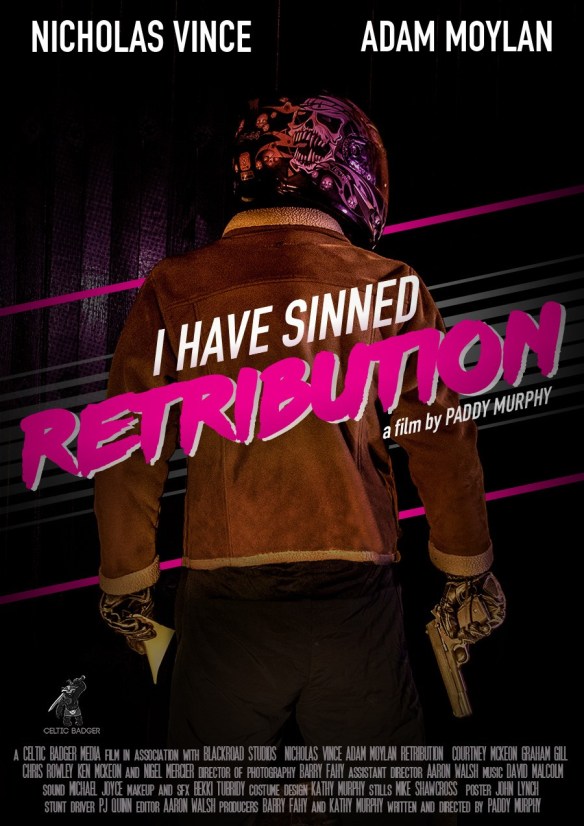 Firstly, I’d just like to say thank you to Writer/Director, Paddy Murphy for allowing me access to an online screener of his 12 minute Exploitation/Crime short, “Retribution”. Retribution is set in Ireland amidst the ongoing criminal underbelly of the catholic church. A vigilante biker (played by Adam Moylan) sets out on the streets at night to rid the city of its most vile sinners. Top of his list, a priest named Argyle (Nicholas Vince from Nightbreed). The film also stars Nigel Mercier and Paddy Murphy. I recently saw Murphy’s debut feature-length film “The Three Don’ts”, which was another Crime/Drama film set in Ireland. Whilst it wasn’t really for me, I’ve been keen to check out some of his shorts. He’s impressively chalked up a number of film credits in a short space of time (under 4 years to be exact).

Retribution plays like a love letter to the Exploitation flicks of the 70’s and 80’s. A revenge fueled biker tale entrenched in the world of organized religion and aimed at those who pray on other people’s weaknesses (or naivety to be more accurate). I’m selective when it comes to these particular films, you often have to be in the right mood for them. I’m digging the artwork which is reminiscent of films like “The Punisher” and “Drive”. Retribution opens with a passage of “Boondock Saints” like narration, introducing the viewer to the world that the mysterious biker is at war with. Barry Fahy’s camera work and framing are generally quite good, the best shots coming while the biker is in transit. Considering the estimated 2,000 pound budget, I was impressed with Murphy’s ability to procure empty streets and shoot those riding scenes professionally. The neon blue and purple lighting that’s applied in the bar scene looks great and the pulse pounding synth score by David Malcolm is perhaps the best component in the film. He uses a series of low-end piano notes in threes to build the suspense but the synth is ever-present in the mix. All in all the performances are decent, particularly from Moylan and Vince, who share the most amount of screen time. Being a revenge orientated short, there are some on-screen kills, some of which are better than others. The most memorable involves a toaster and some solid practical blood and gore. 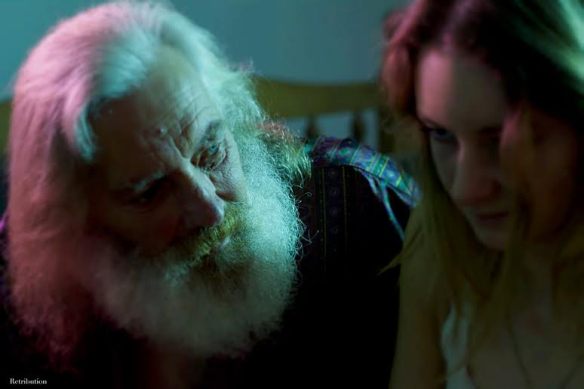 I noticed a few minor issues in several technical aspects of the film but that’s to be expected in low-budget independent film making. There’s a few moments where the camera loses focus briefly and the audio seems a little low in places. Most of the edit works well but I wasn’t a fan of the rapid cuts toward the end of the film during the representation of the biker’s life. It hazily depicts abuse he endured as it all flashes before his eyes. My only complaint with the acting was the complete lack of reaction from the girl (played by Courtney McKeon) who witnesses the biker killing a man. I’m not sure if she was supposed to have been drugged or something but there’s no way you wouldn’t react in that situation (the writing could be to blame as well). 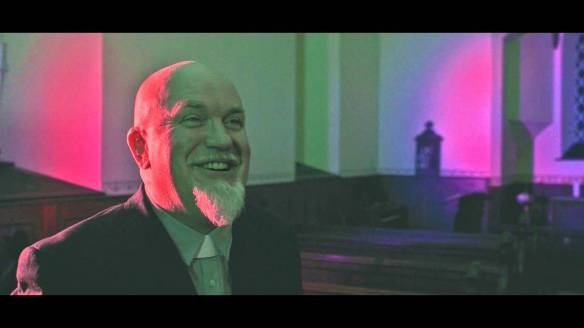 Paddy Murphy’s, Retribution makes no apologies for its formulaic revenge soaked exploitation framework. Clearly inspired by the likes of the aforementioned, “The Punisher” and even films like “Mad Max” and “Torque”, Retribution is a welcomed addition to the sub-genre. Being an atheist I do get a kick out of this attack on the church (albeit in a fictional sense haha), I like the narration, the presentation and the heavy synth pumping soundtrack. There’s effective lighting, a couple of good kills and the performances are mostly solid. The film isn’t without its lapses in technical professionalism and I didn’t love the editing during the climax. If you’re a fan of these particular vigilante films and exploitation of the 70’s and 80’s but maybe you don’t want a full 90 minutes of it, Retribution is your best bet. I enjoyed the hell out of this one and I’d love to see Murphy come back to it again.