With this Thursday set to mark the highly anticipated theatrical release of the remake of Stephen King’s iconic “IT”, I thought I’d best watch and critique the original 1990 mini-series (which has sat in my collection for years). IT is the Film/TV adaptation of the 1986 best-selling horror novel of the same name. IT is told across the course of two different time periods, the 60’s and the 90’s. Set first in the 60’s in the fictional town of Derry, Maine, IT centers around seven pre-teen misfits that make up the self-proclaimed “Loser Club”. An evil entity primarily masquerading as “Pennywise The Dancing Clown” (Tim Curry) is believed to have been responsible for the disappearance of several local children. The only problems is that the adults either don’t remember or simply choose not to. So led by, Bill Denbrough (first Jonathan Brandis and then Richard Thomas) the group must band together and face their fears in order to stop the monster. The film also stars John Ritter, Annette O’Toole, Tim Reid, Harry Anderson, Dennis Christopher, Brandon Crane, Emily Perkins, Marlon Taylor, Seth Green, Adam Faraizl and Ben Heller. 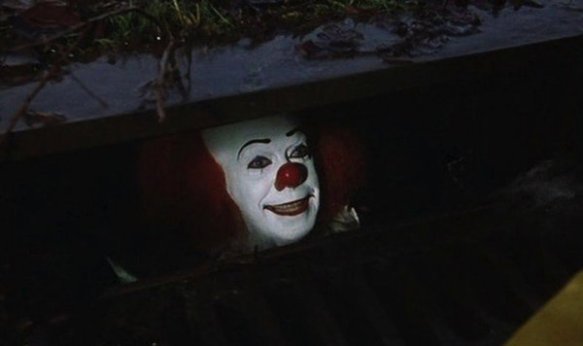 How could anyone forget this image. We all float down here….

I won’t beat around the bush, I’ve never been much of a reader (my sister on the other hand has read just about every book that’s been written). Even when it comes to the horror genre my interest wavers, and they say those who don’t read usually lack imagination and maybe that’s true, but for mine, I’ve always felt that visuals are more impactful than words, but to each their own. What I do know about King’s writing (via my father) is that he always aims to create really likeable and relatable characters, irrespective of if they’re kids or adults. I recall first seeing the poster art (and more accurately the same book cover) and that creepy clown image at an early age, probably 10 or 12, but it each time I saw it, it caught my eye. Of course I was told by my father and even my sister, that it was far too scary for a kid like me, and so I never did read IT (see what I did there). My introduction to King’s story comes with the viewing of this TV mini-series adaption, Written and Directed by Tommy Lee Wallace. I usually enjoy anything small town America, and that’s exactly what Derry is, a quaint little town. White picket fences, quiet streets, small stores and old movie theaters, accurately describe 60’s living (at least in my head). The green forested surroundings and creek bed in Derry make for some really nice camera shots throughout part one, and even in part two, though to a lesser extent. The sewer system where IT lives is probably the best portion of the set design. The makeup department did a wonderful job of bringing Pennywise to life and IT’s now an iconic look, recognizable to horror fans world-wide (in fact even if you’re not a horror fan you know it). Some of the visual trickery Pennywise draws on is presented in a resourceful way as well. There is some practical blood spray throughout the film but most of the violence is PG and only implied.

Something got their attention.

IT is well shot, and for the most part fairly tightly edited. Sections of Richard Bellis’s score evoke the appropriate sentiment, namely the carnival style music that usually plays when Pennywise is near. The casting department in Victoria Burrows and Mark Tillman, deserve the highest praise for their ability to find seven young actors that not only gel seamlessly together in a group dynamic, but are capable of delivering believable performances. Brandis has a couple of scene stealing moments that require some deep emotional stuff and I was impressed with what he delivered. Even more impressive was the duo’s proficiency in scouting almost all the right adult actors to play the respective characters 30 years later in part two of the story, set in the 90’s. In the 60’s timeline, The Loser Club is founded by stuttering middle grader, Bill (Brandis), whose brother Georgie (Tony Dakota) disappeared one day in the street while playing with his paper boat. Bill’s had a long-standing friendship with chronic asthma sufferer, Eddie “Spagetti” Kaspbrak (Faraizl), the nerd of the group. Ben Hanscom (Crane) is the new kid in town and joins the club after Bill steps in while Ben’s being bullied by 14-year-old local greaser, Henry Bowers and his buddies. Ben is sweet on Beverly Marsh (Perkins), a young girl who lives in the same neighborhood and who can usually be found hanging out with the group. Rounding out the club are the slightly older, Richie Tozier (Green) and Stanley Uris (Heller), one a joker, the other the silent type. The last member to join the club is young African/American, Mike Hanlon (Taylor) who also narrates parts of the film. Each of the young actors, and in turn their characters, are highly likeable and that’s mostly what makes IT compelling. The film works best when it’s alternating between timelines rather than when the focus shifts primarily to the group reuniting as adults. Nearly all the pairings are unbelievably well cast, and as they carry some of their core traits through timelines they are easily identifiable. Richard Masur and Ben Heller (playing Stanley) are perhaps the only two actors not quite as well cast.

Firstly, regarding the films patchy digital effects work. I’m going to be a little more lenient on the poor CG, given that the film was made in 1990 and the evolution of computer technology hadn’t really hit at that stage. The hole that opens up in the locker room shower looks a bit like clay animation gone wrong and the filter used to represent characters seeing ghost like images of Pennywise in the moon (among other things) is pretty ordinary. While I enjoyed the carnival music, the remainder of Richard’s score is forgettable and that’s disappointing since this is supposed to be a horror film. It’s overly melodramatic where it’s not warranted and not suspenseful enough when it is. There’s a few weak acting moments from the secondary characters, in particular the early scenes involving Bill’s girlfriend, Audra (played by Olivia Hussey). In fact, even some of our leads are guilty of falling in an out of character momentarily. Despite what fans say about the film, a lot of the dialogue written for Pennywise is lame and comes off unintentionally funny (like a bad stand up comic) and that’s not what I want in a horror film. The infamous line “They all float down here” and all its variations are about all that Curry conjures up in the first chunk of the film (though that’s not on him). After seeing the trailer for the remake, I’m really hoping it’s only used a few times and not worn out like it is here. I think the 180 minute running time is perhaps 20-30 minutes too long, most of that coming in part two. As I said, when the focus switches to the Loser Club adults, the pacing suffers. It can be felt during the groups labored decision-making in the library regarding a way to stop Pennywise. 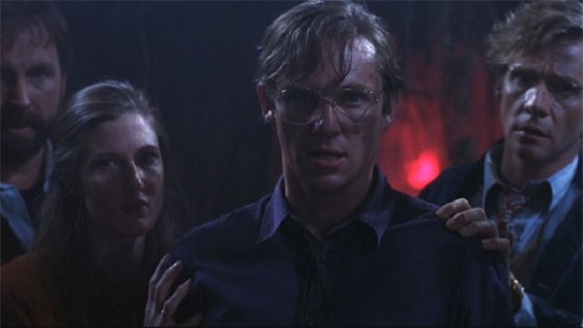 The club is all grown up.

I’m not at all well versed in King’s writing but I’ve seen a few of his film adaptations, enough to know that he deals mostly in Horror and Science Fiction. I’ve come to learn that the various worlds he creates often overlap and correspond to something else in another story. I can’t help but think he never really settled on a tone for IT, at least not in this film adaptation (though like I said I haven’t read the book). “IT” is said to be a monster, that much I know. The entity can use mind control, it can take the shape of a number of different things or people, even defy the laws of physics, specifics all of which are grounded in science fiction, fair enough. My issue is not necessarily the multi-faceted range of powers (for lack of a better word), but that a lot of it is just simply not scary. At first IT is established as a monster, often manifesting itself in the form of a middle-aged man dressed as a clown, and that is when the film is at its most raw. Much like any good horror film grounded in reality, the actuality is what drives the suspense. The club eventually see the energy in its purest form known as “deadlight”, brightness spawned from a giant spider glowing from the belly (though not giant in comparison to today’s CG spiders). There’s no tension during the climax because at the end of the day it’s a big, dopey glow in the dark spider and it didn’t have to be. The “deadlight” aspect backs my sentiments on IT channeling too much science fiction and not enough horror (it’s almost mismarketed). Bright lights that blind you or send you insane, correct me if I’m wrong but we’ve seen that in countless alien themed sci-fi films, haven’t we? It’s all a bit much and it eventually loses its way, made even worse by the closing shots of adult Bill riding a bike fast, resulting in his beloved Audra snapping out of her forced docile state, everyone living happily ever after. I mean come on…. The biggest issue with this 90’s made for TV film is that it’s just not scary. Curry’s performance is serviceable but he’s way too talky and any suspense it might have amassed, gets lost in the mix. 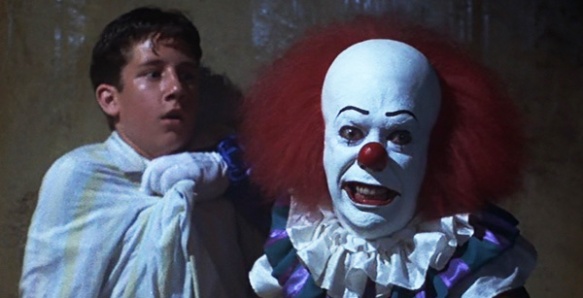 I’ll kill you all.

My expectations were fairly high going into this film adaption of Stephen Kings, IT, especially having heard fans praise Curry’s demented performance as “Pennywise”. This made for TV version ends up feeling much more like the coming of age drama of “Stand By Me” and “The War”, than it does a work of Horror. Cinematography and editing are generally solid and some of the set design and music complements the tone nicely. The strongest aspect of the film is its characterization of small town America and kids growing up via different backgrounds. All the characters are extremely likeable, the casting spot on and each of the performances are consistent. I’m a sucker for the dueling time periods, in particular all the content set in Derry in the 60’s. The towns idyllic existence juxtaposed with the evil that lurks in the sewers beneath, serves as a great premise for a horror story. The problem is, you’ve been misled because this isn’t a horror film. As a coming of age tale it’s more than serviceable, but the supposed horror facet fails to generate even a modicum of genuine suspense in the 3 hour run time. The Pennywise dialogue is rather ordinary, the digital effects are poor and the second part of the film fizzles out prematurely. Without having read the novel I’ve only got this entry to go off of, but it seems King has integrated an unprecedented mess of science fiction into a story that seemed destined for the horror status and it caught me off guard in a negative way. Curry’s performance is what it is but I, for one, welcome Bill Skarsgard and his new take on Pennywise with open arms. I think this modern telling of Kings book is finally going to deliver on what true horror fans want. As it stands, if you like your coming of age flicks, the original mini-series is well worth a look. Pure horror fans can probably skip it.