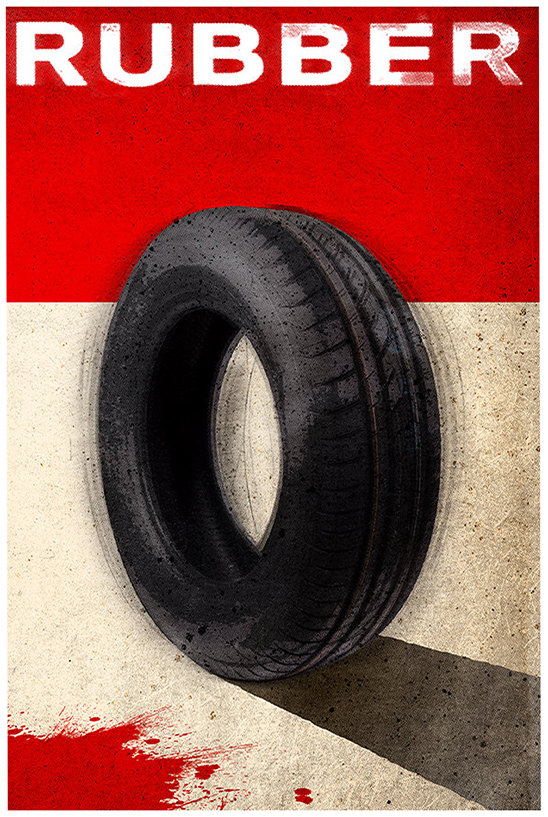 This is a review of the 2010 made, Horror/Comedy film “Rubber”, Written and Directed by Quentin Dupieux. Rubber tells the story of Robert, a tire that wakes in the desert and discovers he has telekinetic powers. From there, film spectators on location watch as the inanimate object goes on a homicidal killing spree somehow linked to a local cop, Lieutenant Chad (played by Stephen Spinella). The film also stars Roxane Mesquida, Wings Hauser, Jack Plotnick and Devin Brochu. 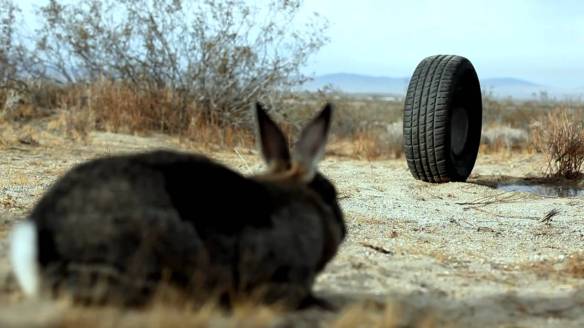 Well…. just when you think you’ve seen it all, and trust me I have (well there abouts), a film like Rubber comes along to once more reinforce that we haven’t quite seen it all just yet. I’ve seen flying sharks, greasy stranglers, wereskunks (yes that is a thing), killer donuts, killer backpacks, killer tomatoes…. well you get the point, things that kill. However, deadly rubber is a new thing altogether so I give credit where credits due (haha). Rubber was shot in the Californian desert and it makes for a great setting. The vast landscape is established through some really nice still shots. The approach to the cinematography is really clever, because while it’s completely nonsensical and implausible to cast a tire in the lead role of your film (did I really just write that), in the end it’s still a slasher film and so it’s shot accordingly and really professionally. Anytime the tire is on the move the shot setups are often almost POV (point of view), and or shot from a slight angle which helps to give off a voyeuristic look. I’m sure Quentin purposely replicated that look because it’s what you often see when you watch conventional killers in horror films. The score is another interesting facet of Rubber. It’s fun and different, utilizing flute and recorder, as well as a couple of conventional songs to highlight the irony of it all. 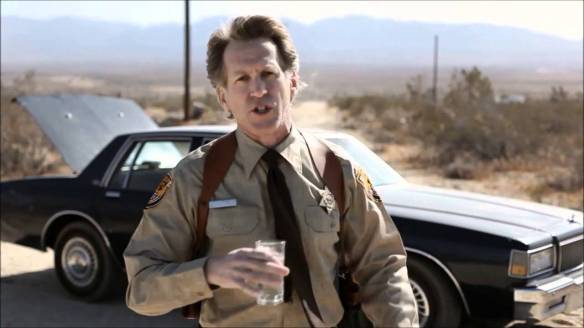 I love the concept behind Quentin’s film and although it looks completely preposterous on the surface, make no mistake about it, there’s more here than meets the eye. Dupieux never once deceives the audience, instead opts to tell them exactly what they’re in for from the get go. Doing so through an entertaining breaking of the fourth wall by Lieutenant Chad in the opening minutes of the film (seen in the picture above). The opening monologue is perfectly delivered by Spinella as he greets the audience. It shows that Dupieux, like most of us, is first and foremost a film fan. Referencing the likes of “E.T”, “The Texas Chainsaw Massacre” and “The Piano” and expressing the lack of reasoning behind the things we see in any given film. There’s a ridiculous self-aware nature to the films “no reason” mantra, and somehow it works (for the most part). In fact, it’s so mindful of its own absurdity that Sheila (Mesquida) even says at one point “Who wrote this garbage”, in reference to some of the lines of dialogue she’s given to read by the Lieutenant. Amidst everything, there’s a sort of movie within a movie playing out as an audience of strangers look on from a distance as the tire wreaks havoc on the small town. The infusion of this performance art (for lack of a better term) only further highlights the oddness of it all. 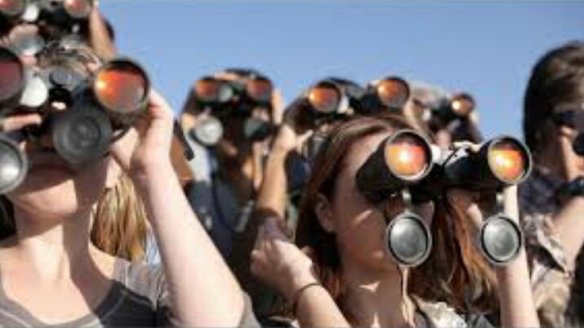 I think all the actors in Rubber know the intended tone of the film and how they’re supposed to play their respective characters, and in turn, everyone gives a solid performance. The films running time is a brisk 73 minutes and most of the focus is on Roberts journey and those unfortunate souls who rub him the wrong way (pun intended). Robert spends his time doing the same things we all do, eating, drinking, watching TV and he even takes a dip at one point (yes you heard me, swimming)…. well okay, it’s not so much swimming as it is sinking to the bottom of the pool, but still. We all know an object can’t do any of those things, but that doesn’t mean it’s not well conveyed and funny as hell. Clever compression and decompression of the tire, with the help of some light sounds, represent his eating and drinking. In another instance, he’s interestingly propped up on the motel bed, watching Nascar of all things (yet some more irony for you). The big thing here is that he has telekinetic abilities and is able to make those around him rupture at any moment, and he does. There’s more than a handful of effective kills in here and they’re all conceived using practical blood and gore effects.

Most of the footage is well shot but on occasion the camera gets a little close and you can lose some perspective. With that said, I’d love to know how the tire movements were done. I’m assuming it was with CG, but if that’s the case you definitely can’t tell because the tire looks like a real one. Even though Rubber is quite short, a few of the scenes feel a touch long and perhaps it may have been slightly better if ten or twelve minutes were trimmed off. There’s a plot point half way into the film that involves a series of deaths that didn’t make a lot of sense to me. It may have been Quentin displaying his abstract thoughts on our reaction to horror films in general, I’m not too sure. If not, what was the motive behind those deaths? That and the one character (played by Plotnick) really exaggerated his acting when his character’s time came, though that may have been intentional. I didn’t fully comprehend the point of the audience portion of the film either, although maybe that was the point.

Rubber ey? Do I dare say that I’ve seen it all now? Surely? One reviewer aptly named this “The best killer tire movie you’re likely to see” and I too would wager that it’d be the only one you’ll see, I just wish I had of thought of that! Rubber is like a cross between “Attack Of The Killer Backpacks” and Cronenberg’s “Scanners”, with a touch of “The Truman Show” thrown in for good measure. I had no idea what to expect going into it and I’d seen a lot of horrible reviews, but after now having watched it, I’d say a few people missed the point. It’s a well shot, professionally handled film with familiar tropes and a completely original villain… or is he/it, the protagonist? You chose. I liked the score and the performances but it’s Quentin’s fresh, bat shit crazy plot, with its self-aware nature, that separates this from just about everything else resembling a B movie. The comedy is there, the blood and gore delivers and there’s even a bit of nudity thrown in. The only downsides were a couple of creative decisions that weren’t necessarily to my liking and the seemingly pointless deaths that occurred half way in. I do feel that if multiple viewings were taken into account, perhaps the short format may have been a better way to go. As it stands, Rubber is a must see for fans of original Horror/Comedies and B movies alike. One of those films you have to see just to say you’ve seen it!