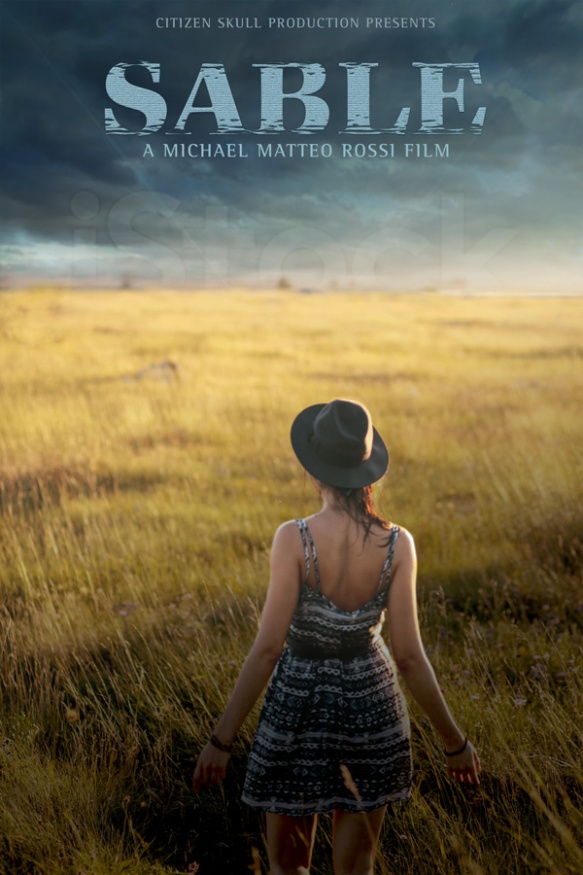 Firstly, I’d just like to say thank you to Writer/Director, Michael Matteo Rossi (Misogynist) for allowing me early access to an online screener of his Crime/Drama film, “Sable”. Sable is about a young woman (of the same name, played by Ayla Kell) who dreams of a fresh start in Wymoing and the ultimate happy ending. Sable’s plans are temporarily derailed when her unpredictable boyfriend, Landon (Jon Briddell) accidentally kills a man. Needing to cover their tracks, they end up becoming involved with a mysterious socialite named Andreas (Rodney Eastman of I Spit On Your Grave). The film also stars Chris Petrovski (TV’s Madam Secretary), Bojesse Christopher (Point Break), Nicole Alexandra Shipley (Buddy Hutchins) and Brianna Mazzola. I didn’t realize that “Loss Of Life”, a solid found footage style horror film that I reviewed way back in 2013, was actually Co-Directed by Rossi *see review* https://adamthemoviegod.com/loss-of-life-review/. Michael started making short films ten years ago and has since added three or four full length features to his body of work. It’s nice to get reacquainted with him, I have his previous film “Misogynist” but much like a lot of my collection, it remains unwatched (haha).

In a round about way, Rossi’s script reminded of another indie Crime/Drama I reviewed called “Misfortune” *see review* https://adamthemoviegod.com/misfortune-review/, there’s actually even a touch of 1993’s “True Romance” about it minus the violent content. The comparisons aren’t necessarily made to what’s on-screen, just the way in which the story forms. The ethos being ones attempt to better their current lot in life (much the same as Clarence Worley does in the latter film). There’s a good amount of experience between DP’s (director of photography), Corey Waters and Jason Weary and it definitely shows here, exhibit A (see image above). It’s not that often that I venture into low-budget (relatively speaking) films expecting the highest quality technical aspects, so I was surprised with the result. A majority of the framing looks good and the cinematography clean and compact. My favourite sequence takes the viewer through Andreas’s private club, utilizing a series of stellar tracking shots, its stylish. The audio levels are nice and clear, minus one or two spikes that’ll catch you off guard, and Chris Petrovski tries his hand at some narration and does it quite well. Most of the editing is smooth and I particularly like the way in which the time lapses are used (normally something I don’t like). It took me a while but I eventually warmed to the score when the orchestral themes took front and centre. Initially I liked the opening ballad, which sounds similar to a piece that “Explosions In The Sky” would write, but then there was a lull for a while. The best technical aspect on display here has to be the lighting, its exquisite. It starts on the highest of highs, with that opening alley shot bathed with yellows and greens, to the yellow streetlights while Sable and Landon talk in the car. Lighting for the club scene feels as if it was inspired by the likes of a Nicolas Winding Refn film (Drive and Only God Forgives), the mixture of pinks and blues look amazing.

I found a few familiar faces in the cast of Sable and for the best part, the performances were solid. Kell leads well from the front, not only does she look lovely but she appropriately gauges the required apprehension for her characters private encounters with Andreas. I’d only seen her on one other occasion in the creature feature “Snakehead Swamp”, so I was impressed with her take on a much more serious role. As for Petrovski, he plays the part of Colton, the angst filled and somewhat repressed son of Landon (Briddell). He’s had roles in Rossi’s “Loss Of Life”, as well as the teen slasher “All Cheerleaders Die” and more recently CBS’s “Madam Secretary”. He definitely looks the part, covered with creative ink and sporting an attitudinal problem that makes for solid drama. I think he more than held his own and I liked how his character was used in order to fuse the arcs of the other lead characters. Rodney Eastman has had a 30 year-long career, mostly as that guy you kind of recognize from something but you can’t quite put your finger on exactly what it is. It wasn’t until Steven R. Monroe’s unrelenting but superb remake of the exploitation cult classic, “I Spit On Your Grave” that I really saw what a talented actor he was. I didn’t really have any interest in his character in this one but he did what was required of him in the role. Jon Briddell delivers a firm performance and boy does he look a dead ringer for fellow actor Viggo Mortensen, I’m looking forward to seeing Jon in Rossi’s other aforementioned film. Brianna Mazzola’s, “Karen” fits into the film quite nicely too. Secondary characters like Nicole and Bojesse’s help fill out the world of the story but have little bearing on any of the film’s key events.

The bulk of the technical aspects are really well handled but not everything’s perfect and there are some hiccups along the way. In the opening act there are sequences where the actors heads are framed rather unusually, although that could just be down to what your preference is for the shot. The sun wreaks havoc spilling light onto the lens during a flashback scene by the pool involving Lilian (Shipley) and her boyfriend Zac (Atli Fjalarsson). In another scene involving Karen and Marco (Christopher), there’s several frames where an indistinct reflection can be seen and it’s a bit off-putting (may just be the screener copy). For the most part the music is appropriately arranged, but on occasion the drama heavy score drops out abruptly while one scene transitions to the next. I think Rossi wrote a befitting script for the genre but he’s guilty of some sluggish pacing and the lazy overuse of profanity in the dialogue. The first act is certainly a slow-burn, no action to speak of. Sable is pretty plainly built around the crisis the two find themselves in, and those internal dramas that go along with their respective relationships to the other characters. Now that’s fine if you’re building to something bigger and better in the climax, unfortunately I don’t think that was the case here. The script fails to deliver on the crime aspect, nor does it give any real edge to Andreas, the supposed antagonist of the piece (for lack of a better word). Sure, you go back and forth on him perhaps being somewhat misunderstood or even lonely but there’s simply no passion, he offers up very little in the way of sensibility. Flashbacks come on without warning, nothing obvious for the viewer in the edit or transition titles to depict what you’re seeing. You’re temporarily taken out of what might have been a key scene and planted in a different setting altogether with new characters that haven’t been introduced prior.

I think the biggest hindrance to the credibility of the story lies with some of the specifics, and to a further extent Rossi’s casting. Don’t get me wrong, the performances are good so I don’t mean it in that sense, but I shouldn’t really be questioning each of the three key characters and their relationships to one another. More of the audience than not are probably going to think the same thing as me in assuming Landon is looking out for his daughter in the beginning of the film, but is he? Is it his daughter or someone else altogether? The early interactions between Sable and Colton back up those sentiments. It feels far to natural for two people who may have only just met each other (for all the audience knows). Ayla and Chris even look as if they could pass for siblings. The truth behind the relationship is revealed quite early but it remained a hard pill to swallow for the duration of the film, especially when I see there’s a 24 year age gape between Kell and Briddell. Rossi does save face somewhat though because later, during a flashback, there’s a piece of dialogue that raises the age difference, so there’s that. The scene where Sable knocks on Colton’s door (while he is mid intercourse) requesting help is a strange one too. It seems more appropriate that Landon would be the one to set the whole thing in motion, given what transpires is due to his own doing. I guess we’re led to believe that he has mentioned Colton to Sable and so she’s familiar with him, because there’s no questioning, Who the hell are you? Or how do you know Landon? etc. Making matters worse is there’s a scene of good-natured verbal banter between the two later in the film but it’s jarring and completely misplaced. It’s as if the two have known each other forever, yet in the beginning we learn that Colton has essentially had nothing to do with Landon for such a long period of time. In hindsight, there’s probably not quite enough layers in the content to warrant a full length feature and therefore it halters the films betterment. 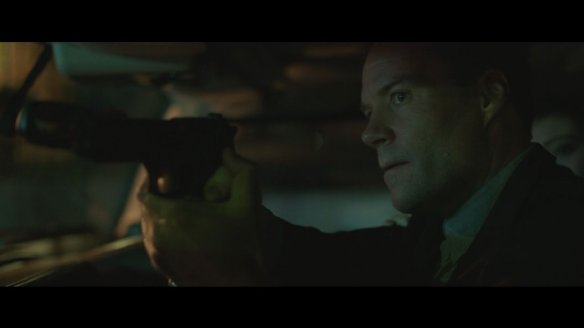 Sable is an intriguing Crime/Drama film, albeit much more about the family dynamics of the characters than the display of actual criminal behavior. I liked the premise of the film and its polished technical aspects really impressed. The cinematography gives it a high production value, the audio is clean and the soundtrack steadily lifts. The colorful lighting was absolutely gorgeous and I commend the crew on executing that aspect so well. Everyone turned in consistent performances and I always enjoy seeing familiar faces working across the independent film community. The story has its moments and the acting keeps it moving along. The downsides are that it’s missing the crucial component of a well-rounded antagonist and it also stifles in its pacing, especially when the clunky flashbacks are present. Sable is essentially missing its element of crime, I suppose there’s a hint of it there but it gets lost in the grounded drama, something the trailer doesn’t convey as accurately as it probably could. I don’t think the film needed re-casting per say but something needed to be done about the ages. Unfortunately several other key character interactions fell down and I found it very difficult to set that age difference between Sable and Landon aside, something you’ll need to do in order to stay completely invested in the story. Rossi’s not even 30 yet and he’s honing his craft, getting a fair bit right here. That said, there’s still plenty of room for improvement in his writing and I look forward to seeing what he does next. Keep an eye out for Sable if you want to check it out!