This is a review for the 2016 Drama/Thriller, “Badlands Of Kain”, Written by Rachelle Dimaria and Directed by Andy Palmer. Badlands Of Kain sees old friends Shannon and Kris (played by Dimaria herself and Katrina Norman) reunite for a cross-country road trip. Shannon’s distant relationship with boyfriend Josh (Scott Evans) is reason enough alone for her adventurous counterpart to suggest a girls vacation. Car trouble lands the girls in the desolate town of Kaine, Arizona. Terry (Paul Soter of “Broken Lizard” the comedy team) the local priest and altruist, offers to tow their vehicle and sort them refuge. It’s not long before Shannon and Kris learn that leaving Kaine isn’t as simple as entering it. The film also stars James Marshall (from TV’s “Twin Peaks”), Jordan Belfi and Kaylee Wing. This is one of those films that was recommended to me by IMDb, after searching for something similar in the genre. It’s an easy thing to just ignore it and continue going about your business, however, you might find yourself missing out on a hidden gem. 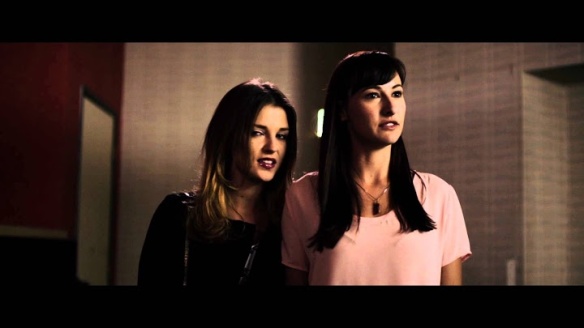 The above poster art was the initial thing that jumped out at me and got me interested in Palmer’s film. I know you can’t, or shouldn’t, judge a book by its cover but unless you’ve got time to do your research (thankfully I do), it’s usually all you’ve got. The subject of life and death and more importantly faith, or a lack there of, are the central themes covered in Badlands Of Kain. On the surface, it appears as though this might just be a cautionary tale about what can happen when you go off the beaten path and well yes, you’d be right to a degree but there’s a little more to it than that. I’m glad Rachelle dug a little deeper in her writing and designed most of her character arcs around real human behavior, rather than just reverting to predictable archetypes we’re so used to seeing. The story opens with a scene involving PJ (Marshall), his wife and some impromptu action. The brief practical blood and gore effects looked great and the scene unfolds with some nice close-ups and fast intense cuts, helping to convey the pressure that’s clearly been building in their lives.

The camera work is quite diverse and all the framing looks nice. Beginning with Shannon wanting to document the road trip, an objective that lasts for all of ten seconds (quite literally haha). Instead, it moves right along to sweeping shots of “Ladybug” (Shannon’s trusty Volkswagen) and the girls, as they travel across the arid landscape of Arizona, that is until they breakdown. From there, the remainder of the film utilizes Steadicam to help build the suspense and for the most part, it works. The lighting is another standout feature in Badlands Of Kain, there’s a constant use of red and yellow anytime characters are seen in the main street. Even inside the motel room there’s always a reflection in yellow coming from the “street” (and I use that term loosely.. it’s a small town). The audio track is clean throughout and I love the Violin/Strings based theme during the opening credits. Chris and DJ, the two guys responsible for the soundtrack, did a wonderful job. There’s a variety of themes here, shifting between the classic orchestral score you’d hear in any number of Giallo’s from the 60’s/70’s, to a modern Tim Burton movie soundtrack. It’s unsettling at times and on other occasions, downright quirky.

The big take away from Palmer’s film, is his (and Rachelle’s) ability to cast surprisingly good actors/actresses, who end up delivering strong performances across the board. A very well written script, when penned by Dimaria herself, is one thing but to also then deliver a genuine and grounded performance vital to the film’s success, is a whole different feat. I recently began writing some short scripts myself and I know how much work goes into it, so to do so for a full length feature as well as play the lead character, deserves some commending, kudos. Katrina does a nice job as Kris, balancing wild party girl and loyal friend, while James Marshall (one of my Twin Peaks favs) showcases what he can do, with an unnerving performance of an edgy character so far removed from the motorcycle riding introvert we all knew in the 90’s (well the character I mean), it’s not even funny. Young, Kaylee Wing deserves a special mention in her very first performance. Playing Emma Jean, she’s a natural in front of the camera and her timing is good. The chemistry between the girls is natural but that’s only half the battle, the mystery of the situation hinges on often funny guy, Paul Solet (Super Troopers and Club Dread).

It doesn’t happen often but once in a while, you’ll see an actor step so far out of their comfort zone by taking a role that really surprises you, and for me, that’s Solet playing “Terry” in Badlands Of Kain. Here’s a guy that’s only ever done comedy and done it pretty well. He could have just rested on his laurels but no, he takes a role in an independent film, by a new writer, of a character completely out of left field, given the previous types of roles he’s played, that’s something I feel earns respect. Terry is the mild-mannered, ever so helpful priest of Kain, yet you can’t help but feel like something’s a little awry with him. His strong performance is only further heightened because of Rachelle’s honest and realistic writing I touched on earlier. He never becomes a parody or misrepresentation of the character he plays and that’s such a difficult thing to maintain. This is by far in a way Paul’s best performance and as a fan of his work in comedy as well, I hope we get to see him push the boundaries further by continuing to explore different roles.

There’s some immature dialogue in some of Shannon and Kris’s interactions and a fairly common writing trope that comes to light in the second half of the film. The film is also quite guilty of predictability, with its foreshadowing of the sleepy town not being all it seems. Although the direction makes for an interesting metaphor about faith/religion and the possibility of an afterlife, it only allowed perhaps one other possible outcome. In hindsight, I would’ve preferred to see that other road taken (pardon the pun). With the characters of Kain being written so realistically, I think we could have seen a much darker side of the town. The running time is 109 minutes and unfortunately because of the slow burn nature, it feels every bit as long as that. There’s little character development after the opening act, so things could have progressed much quicker. On several occasions in the middle portion of the film, there are subtle signs of something strange going on but it’s never really enough to make Shannon or Kris dig any deeper. In retrospect, nothing would have been lost if the run time had have been cut by twenty minutes.

Badlands Of Kain is an intriguingly written film by Dimaria and well presented by Director, Andy Palmer. The shooting style is slick, the lighting atmospheric and the suspense lay in the mystery behind the town of Kain. I love the poster art and the overall production value is impressive. The “Twilight Zone” esq premise and Tim Burton like score, go hand in hand but it’s the quality of the casting that elevates Badlands from its counterparts. Rachelle and Katrina’s take on their characters, make them mostly likable protagonists and it’s great to see the talented James Marshall on-screen again (getting me all the more excited for the return of Twin Peaks). If there’s a surprise in Palmer’s film, it’s Paul Soter. You know the guy can do comedy but what he brings to the mysterious Terry, is a certain amount of unpredictability. In part because the character requires it but there might also be a layer of art imitates life, with him stepping outside his comfort zone in this role and therefore inadvertently displaying that insecurity. Either way, Paul was fantastic. I could see what they had in mind for the ending but as I said, there was another way they could have gone with this (think Kevin Smith’s “Red State”). On the flip side, I could see how they wouldn’t want to label the masses as fanatical and consequently decided on a different resolution. If I’m honest, I think the slow development might dampen wanting to revisit the film for a while, none the less, it’s a very well made Drama/Thriller that deserves your attention. I’m excited to see Palmer’s other new film “The Funhouse Massacre” and any future works from him or Dimaria. Be sure to check this one out if you get the chance!

2 thoughts on “Badlands Of Kain (Review)”