Over the last decade Writer/Director, M Night Shyamalan rightly or wrongly has been on the end of some pretty harsh criticism which hasn’t necessarily been warranted. Sure, the guy’s made a few duds here and there but so have most filmmakers at one point in their careers but it’s not usually a reason to lose faith in them. I’ve always been a huge fan of Night’s films “Signs” and “The Village” which were both wonderfully suspenseful and cleverly told stories with a particular style of comedic relief in them. I’ll be honest I even have a soft spot for Marky Mark and “The Happening” I know.. I know what you’re thinking. I understand it’s not really a mainstream film (for those of us who liked it, the takeaway message was a nature warning cautionary) and although there were aspects I didn’t like about it it’s far from his worst film. It’s been a couple of years since Shyamalan’s film “After Earth” but 2015 saw him return to the Horror/Thriller genre for the first time in over 10 years with his new film “The Visit”. The Visit is about two young siblings Becca and Tyler Jameson (played by fellow Australians, Olivia DeJonge and Ed Oxenbould) who document a week-long stay in the country with their grandparents whom they’ve never met. Becca and Tyler attempt to get closure for their mother Loretta (Kathryn Hahn) regarding events from her past and they do so by getting to know their grandparents but all is not what it seems on this quaint Pennsylvania farm. The film also stars Deanna Dunagan, Peter McRobbie and Celia Bolger. 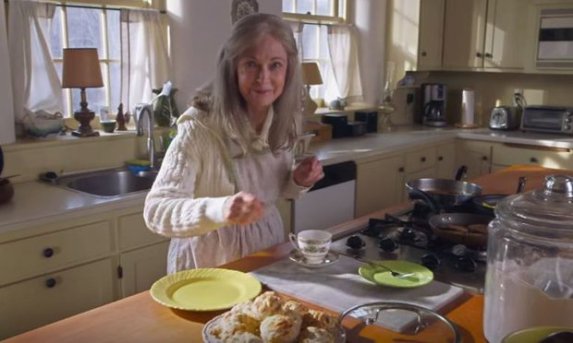 Much to my surprise I enjoyed the shooting style of The Visit. It’s a nice combination of conventional still work and Steadicam, along with “found footage” or more precisely handy cam (because FF is of events from the past not the present). I know it’s an approach viewers are sick of simply because of the sheer number of films being made like it. It’s usually to cover up sloppiness in other departments but in this case it works well because the film’s plot warrants it. At only 90 minutes The Visit is evenly paced and you won’t find yourself getting bored. Much like Night’s best work it’s a steady build up to an eventual climax/reveal. For the most part the editing is smooth but even when it’s sharp it’s usually to magnify comedic timing. There’s a couple of well-edited and humorous scenes involving Tyler unpacking clothes and making faces at the camera. I’ve always thought the one constant in Night’s body of work was the scores, so you can imagine how thrown off I was by the lack of sound in the Visit…. well there’s sound but not the usual intensified music. It’s a pleasant surprise to see the film work so superbly with just one brief piece of music in the first act (repeated at the end) and nothing for the remainder.

Let’s talk about the writing. This is clearly Shyamalan’s best writing since Signs (well The Village for me but let’s go with the masses). He’s stripped everything back, taken a simple premise like going to visit your grandparents and turned it into a fresh and suspenseful tale. Right off the bat we are introduced to the James family of 3, we come to know that the man of the house left years before. The situation and important background information is laid out for us in the first fifteen minutes, which is something that can be key in getting your audience engaged something Night has failed to do in some of his recent films. What he’s done here is taking what’s seemingly a serious situation and lacing it with a surprising amount of comedy, something I think he’s done quite well in the past and does so again here. It’s a balancing act between the characters and we get a bit of everything. From the humor of T Diamond Stylist (Tyler’s rap stage name haha) who busts out some funny and impressive freestyle jams, to the more dramatic Becca concerned more with the authenticity of her documentary, to the mixed bag of vague and iffy that is the grandparents it’s all nicely conveyed. There’s some great tension filled moments and a couple of jump scares but importantly nothing gets overused. The two most suspenseful scenes involve a game of hide and seek under the house and what I can only describe as the “Bloody Mary” scene, good stuff!

Kudos have to go to the casting department on The Visit because everyone here is on their game. Not only do Ed and Olivia both deliver credible American accents they also look like they could actually be brother and sister. I’ll go you one better than that, Kathryn Hahn even looks like she could be their mother! Casting the right people is only half the battle though you’ve got to have a group with genuine chemistry and our four leads have it in spades. Oxenbould and DeJonge work off of each other perfectly and when you add Deanna and Peter to the mix (playing the grandparents) you’ve got a real affability. Speaking of Deanna and Peter, they both give unsettling performances and each have a couple of cool highlights in the film. I don’t want to spoil anything as far as revelations are concerned but we’ve all come to expect that classic Shyamalan “Sixth Sense” twist and The Visit doesn’t let you down but it gives you something quite different. I’m interested to hear what others think of the direction the story takes. Certain aspects of the film seem far more grounded in reality in comparison to any of Nights previous work, but than other times it feels a little unsure of what it’s aiming for tonally, it’s an interesting contrast.

Everything is pretty well shot given the use of minimal cameras but those of you who aren’t seasoned viewers of shaky-cam might find yourself getting a little disoriented in one or two sequences. Most of my other criticisms are to do with finer points of the writing, such as expendable material that’s used to round out the siblings character arcs. There’s a handful of unnecessary interactions between Becca and Tyler, which mood wise took the film in a much more dramatic direction. Becca doesn’t like to look at herself in the mirror for whatever reason and Tyler has a heavy case of OCD (obsessive compulsive disorder) but only when it comes to germs. Neither points are discussed at length and therefore could have just been cut. Tyler also tells a story that seemed leading about his father and events of a certain pee-wee game of football he played when he was a little kid, I guess it comes into play in a round-about and unexplained way toward the end of the film but yeah. Was he in some sort of trance? I don’t know what was happening there. There also doesn’t appear to be any kind of significance to 9:30, which is usually the time Nana and Pop Pop retreat to their room. Why? we all want to know why? There’s a couple of other dead-end conversations and freak out moments involving Nana after she’s questioned by Becca in regards to Loretta. (No Spoilers) but now having seen the film I’m not sure why she would react to the questions the way she does. 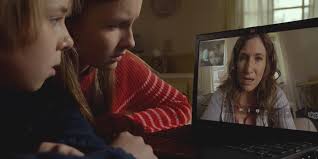 The Visit saw M. Night Shyamalan successfully return to the fold, the Horror fold that is. Box office wise this latest film has done pretty well and so it should have, it’s a blast. Night has written a very fresh and entertaining script with possibly two of the most likable siblings at the core. Technically it’s a far superior film to just about everything we’ve seen done with the handy cam/documentary approach and the absence of music really helps generate that uneasy feeling the mysterious grandparents give off. The acting from everyone is top-notch but the surprise packet came in the form of Olivia and Ed who really make you care about their characters and dire situation. The Visit is a perfect blend of Suspense/Thriller and Comedy, it feels like a mix that shouldn’t work but it does. Topping things off is a disturbing and sharp twist that I didn’t see coming at all. There’s a few things in the writing that weren’t needed and half a dozen unclear character quirks, including a state of confusion for one character during the film’s climax but overall nothing that took away from my enjoyment of the film or its entertainment value. I think this is a really solid entry from Shyamalan and I can gladly recommend this to everyone!

2 thoughts on “The Visit (Review)”