NIGHT OF THE SLASHER

Firstly, I’d just like to say thank you to Writer/Director Shant Hamassian for allowing me to view an online screener of his 12 minute, Horror/Comedy short “Night Of The Slasher”. Jenelle (played by the gorgeous Lily Berlina) a young teenage girl, must break all the cardinal rules surrounding the do’s and dont’s of a horror film such as drinking, taking drugs or having sex. She aims to do this in an attempt to lure a masked killer (Adam Lesar) in the hopes of finishing him off once and for all. The film also stars Scott Javore, David Swann and Eve Constance.

The concept of Night Of The Slasher takes me straight back to 1996, the year that gave us Wes Craven’s “Scream” (R.I.P Wes). The Horror genre was quite stale at that time and Scream ended up becoming the film to breathe life into the genre once again. In Craven’s classic, Randy the joker of the group explains the rules one must abide by to survive a Horror movie and that premise is the basis of Shant’s film. I dug the killers mask, he kind of looked like Spock from “Star Trek” (I’m not sure if that was intentional or not haha). It was creepy and his weapon of choice being the kitchen knife, comes across as a bit of a nod to the Michael Myers character of the “Halloween” franchise. The audio was nice and clear and the rock song playing in the beginning was a solid track. Some of the still shots while Jenelle and “The Bait” (played by Javore) were sitting on the couch looked impressive. Jenelle’s approach towards the drinking part of the night was entertaining. Side-note, the kitchen of the house draws a striking resemblance to that of Stu’s kitchen in the original Scream, so keep your eyes out.

Lily Berlina does a wonderful job of venting her frustration given her predicament and all without saying a word (well almost). She’s absolutely gorgeous and I can’t wait to see her in future projects. She has some enjoyable comedic moments, as does her unfortunate date for the night. His timing was great and the over zealous approach towards Jenelle tied in with his demise was very funny. That sequence is something a lot of the female viewers will probably roll their eyes at and be able to relate to. The practical blood and gore on display was of the highest quality. It builds to quite a ferocious finale that I think hardcore horror fans are going to enjoy.

It’s difficult to find fault in Night Of The Slasher given it’s only 12 minutes long, but here’s a couple of nit picks. One thing I’d mention was that the score was a little uneven. I understand this had elements of Comedy and Horror depending on how you look at it, but it felt slightly more “Twilight Zone” supernatural sounding than I expected. I also respect the fact everything was shot in one continuous take but unfortunately that leaves some rushed and jolting camera movements when the action picks up. It also creates problems with some of the consistency regarding the films framing. In a few shots the camera is rather close to the actors/actresses faces and doesn’t make the most of the scenes surroundings. 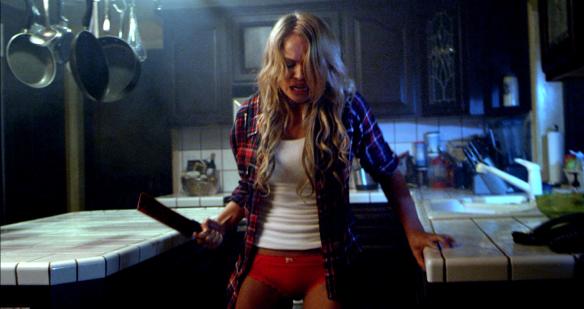 Night Of The Slasher is a welcomed addition to the “Short” film category and to Horror/Comedies in general. The traits and specifics in the genre are entertaining and nostalgic ones that are carried by a beautiful and talented lead in Lily Berlina. The comedy hits the mark, the killer is creepy and the blood and gore effects are a hell of a lot of fun. If this had have been broken up and cut together a bit more stylistically it would have suited me even more so. Hamassian’s film is still right up there with some of the best, such as Chris McInroy’s “Bad Guy #2” and Jason Kupfer’s “Invaders”, both of which I reviewed on this here very site. Night Of The Slasher is doing the festival rounds and receiving plenty of well deserved praise, so keep an eye out for it soon!