This is a review for the 1977 Horror/Mystery film “Suspiria”. Directed by Italian born, Dario Argento starring Jessica Harper, Stefania Casini, Alida Valli and Joan Bennett. Suspiria follows the story of Suzy Bannion, a young American girl on a Ballet scholarship in Germany. Upon her arrival, she witnesses a girl in distress attempting to leave the academy. The next morning she’s informed by Madame Blanc (Bennett) the head of the academy, that the troubled student she’d seen the night before had been violently murdered and the police were now beginning an investigation. Suzy finds a way to settle into her routine and ends up befriending another girl named Sara (Casini). Together, they do some investigating of their own coming to the realization that the school may be a front for something supernatural and sinister. Argento made a name for himself in the 70’s and 80’s with his avant-garde style of film making, giving audiences something very different for the genre. I’ve only seen a couple of his films “Deep Red” and “Tenebre”, both of which I found very stylized but lacking substance. Suspiria has been hailed as one of the greatest Horror films of all time, let’s see if that’s true shall we.

The two distinct things on show as Suspiria’s first act plays out are how crisply everything looks, and how brilliantly crafted the shots are. As well as the vibrant color palette on display that decorates and lights everything. The desired effect was to go cinematic, so there’s a lot of wide shots and gentle panning and it looks great. Whenever there’s a conversation taking place that might involve an important revelation, a gentle zoom is applied. The aerial shots are another interesting choice. There’s a voyeuristic and slightly surreal sequence where Suzy and Sara are swimming, and the camera focuses on the stillness of the water, it’s very effective. Argento’s screenplay is carefully structured and quite subtle. It relies on audiences using their imaginations to paint a picture, not giving you the typical on-screen shock value or telegraphed jump scares you may be used too. The opening few scenes help to set the tone perfectly. As Suzy arrives at the airport, you hear a nice light synth score that steadily builds as she heads out the door and jumps in a cab to make her way to the dance school. Accompanying that opening piece of music, is an extremely effective use of red. Red lights seeping through the windows into the terminal, as well as reflections, from what I guess are probably cars or traffic light beams. Suzy is denied access to the school initially because there’s no one around to verify who she is, so she gets back in the taxi and leaves. Following the scene, a score starts to build with a heavy focus on drum and bass, clearly designed to give you that unsettling feeling that you know something climactic is about to happen. 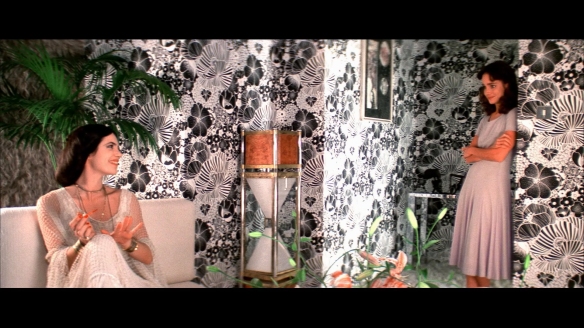 The set design and the look of the academy is very unusual and original, it definitely broke new ground for its time. The only other Director with such an innovative aesthetic approach around that time was Stanley Kubrick (A Clockwork Orange and Lolita). It’s clear established filmmakers like David Lynch, and more recently Nicolas Winding Refn (Only God Forgives), got their inspiration at least in part from Dario’s technique. The architecture here is old and the tone of Suspiria is an odd fusion, made up of equal parts mythology, fairy-tale and superstition. He makes the most of the one location majority of the film takes place in. As you enter the building there’s a large foyer, with a gradually winding staircase. At the top, there’s a corridor with dorm rooms leading off it where students of the academy stay. There are other areas that feature prominently, they include the change room and the main ballroom. Every one of them have their own unique style. Suzy spends a brief period bunking with Olga, another one of the young girls at the school. Her walls and floor are decorated almost entirely with black and white flower wallpaper (as can be seen above), reminding me of something out of a fairy tale. The rest of the building is heavily coated with red’s, pink’s and purples making it look rather tacky, but in certain light it can seem elegant.

Suspiria is measured in its storytelling and the narrative creeps to a culmination. With the exception of an intense opening, only snippets of action can be seen in the rest of the film. The special effects shown all seem to have been achieved practically, and given it was 1977 that’s pretty impressive in and of itself. The blood is fairly thick and the color is almost like a red children’s paint, but it works in the confines of the internal flair of the house. The last act of the film has some of the best visuals I’ve seen in any film in a long time. The distinctive changes in how each of the areas are lit, along with the colors that are used, make for a visual spectacle. As the film gradually becomes more intense so does the music and the rapid transformation of color. The wall  you see before the finale kicks in was truly something (those of you who’ve seen it know what I’m talking about).

In the early stages of the film I thought some of the editing was quite abrupt, which highlighted what I originally thought were continuity issues. During the infamous suicide scene, I noticed some of the transitioning between frames lost a primary reference point, therefore the spacial awareness to everything in the scene confused me. I’ve read that Argento purposely clipped specific scenes and lengthened others to try to rattle the viewer. The technique works well in the latter part of the film but early on it felt like a burden. I didn’t know a lot of details surrounding the plot of Suspiria, so bye the end I was a bit disappointed with the mystery part of the film. Early on I picked a couple of the characters that I thought might be involved in the questionable activity, and that foiled some of the impact when it came to the final revelations. The script definitely isn’t perfect, but I’m aware that some of my objections would probably be more relevant if this wasn’t almost 40 years old. Shortly after Suzy begins to suspect something untoward is going on, she begins to feel delirious and collapses during a lesson. It’s played pretty over dramatically and comes off looking quite silly, although I’m sure they didn’t think that at the time. Much to my surprise, everyone seems very relaxed given the coincidental and strange events that happen in the first half of the film. It’s only when further investigating is done that people wake up and smell the coffee (so to speak).

The set design, with the walls having a door drawn on and steps heading in different directions reminiscent of something like Alice In Wonderland or Snow White.

Suzy and Sara mention very early on they need to find out where the teachers and head of the academy go after lights out. All students are told the staff don’t reside in the boarding house section of the academy, yet Suzy notices a pattern in the footsteps that suggests otherwise. They talk about investigating but nothing more comes of it, at least for a while. It’s not until several other mysterious events occur that Suzy seeks help from a friend. Other than the police arriving the morning after the murder to ask some brief questions, no one does anymore official investigating. The detectives are written out of the story without warning. Now that’s not necessarily a problem because it can help to progress the story, and in this case it does but I hoped they would at least use them in mounting the body count. I would have thought some more investigating should have been done earlier to make it feel more realistic. The standard of acting isn’t bad taking into account the time period. However, several interactions between Suzy and the staff feel pretty casual but on the other hand her scenes with Sara feel too stiff. Harper’s concerned facial expressions  resemble those made on any soapie in years gone by and don’t help you engage.

Even though the score sounds wonderful, most of the time it’s exceptionally loud in the mix. On several occasions it begins to mount with severe bass and deep drum/percussive sounds which are unbearable for more than a few seconds. After doing some reading on the subject, I now understand Argento’s intentions with building the score in that manner. Unfortunately I had the surround sound on and nearly went deaf in the process of watching the film and that bothered me. It would have done wonders to the overall result if the music had been pulled back a notch. On another note (pardon the pun), the suspense ends up feeling telegraphed because anytime said music intensifies you know something is about to go down. It’s so loud that you feel like the characters in the film are supposed to be hearing it, which they’re not. Another interesting bit of information I found out afterwards was that Argento purposely played, obnoxiously loud music on the set to help the cast get into character. In my opinion the volume levels are the film’s biggest hindrance and hurt what would have otherwise been a terrifying film (I guess some still say it is). 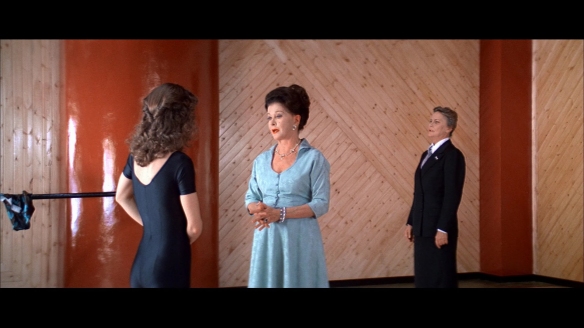 I was pleasantly surprised by Suspiria. The key to this was I got the much-needed substance found lacking in a couple of Argento’s other films. Visually this has to be one of the best, if not the best Horror film ever made. The cinematography and shot choices are meticulously crafted, and not a single frame is wasted. The diverse lighting juxtapose with the frenzied soundtrack (from the experimental band “Goblin”), is what generates most of the tension. The brief moments of action and their practical effects are well executed. On top of that, the subtle nuances throughout the script and the last revelation help to finish the film off on the same high note it began with. A few technical issues needed to be tidied up in the editing room, namely those overbearing volume issues. The same can be said for the missed opportunities in the script, such as following up a deeper investigation into the murder, as well as carrying out some better looking choreography. Harper’s movements and facials aren’t perfect, but she’s still likable and most of the supporting cast are solid. Even with my reservations, I thoroughly enjoyed Suspiria and I would definitely recommend it to those who like the stylized films of Stanley Kubrick, David Lynch and David Cronenberg.