1986. It wasn’t just the birth year of yours truly, it was a year that saw the release of many box office hits like, “Top Gun”, “Aliens” and “Pretty In Pink”. “Big Trouble In Little China” an Action/Adventure/Comedy directed by, already established filmmaker John Carpenter was released the same year. Though It wasn’t until years later that the film gained notoriety, and somewhat of a cult status among audiences. The film was initially poorly promoted, and marketers didn’t really know how to sell it, which led to extremely average ticket sales. I only recently saw the film and heard about the upcoming remake, set to star Dwayne Johnson as the All-American truck driver, Jack Burton. So in preparation for the remake I thought a review for the original was on the cards. Big Trouble In Little China is about Jack Burton (played by Kurt Russell), a trucker hauling a load headed for Chinatown in San Francisco. After a friendly game of poker with Restaurant owner Wang Chi (Dennis Dun), Jack accompanies Chi to the airport, he’s supposed to be meeting his green-eyed fiancée, Miao Yin (Suzee Pai). One thing leads to another, and Miao is kidnapped by a Chinese street gang. Jack and Wang soon learn of a centuries old curse, about a powerful and evil sorcerer called Lo Pan (James Hong). Lo Pan can’t exist without a physical body, and to break the curse and free himself, he must marry Miao whose not only a green-eyed woman, but the chosen one. Together with the help of Gracie, a lawyer (played by Kim Cattrall), a friend Eddie Lee (Donald Li) and sorcerer Egg Shen (Victor Wong), the group face a world of wizardry magics, monsters and martial arts in the hopes of saving Wang’s wife. 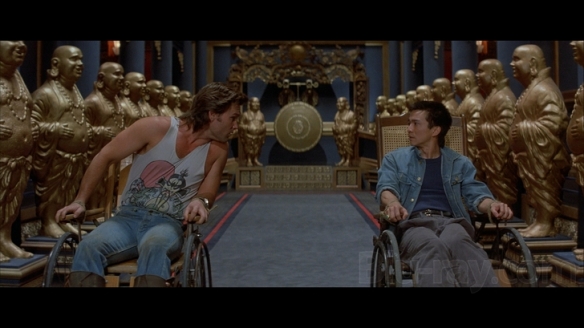 Prior to this, Carpenter had made a bunch of really great Horror films. The likes of “Halloween”, “The Thing” and “Christine”. He’d experimented with a bit of action in “Escape From New York” and “Assault On Precinct 13”, but hadn’t ventured into comedy or anything more on the light-hearted side. He didn’t write Big Trouble and that doesn’t surprise me, but to come on board in a genre that’s out of your comfort zone takes guts. The poster is catchy and the screenplay is a lot of fun. Its nothing that’s meant to be taken too seriously. This feels like it’s channeling the likes of “Flash Gordon” or other 80’s films like “Eliminators”. Jack Burton could even be a distant relative to Roddy Piper’s character “Sam Hell” from the 1988 film “Hell Comes To Frogtown”, or visa versa. They’re both Patriotic Americans that fancy themselves as ladies men. The consequences of their sudden removal from familiar habitats, is often comedic and makes for entertaining viewing. 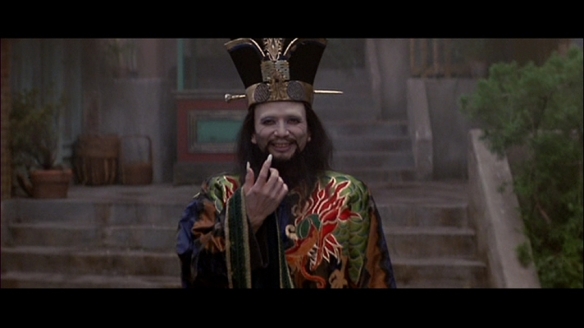 This is really well shot and most of the sequences are complemented by a great use of sound. There were over twenty people who worked on the sound design, everything has its place and feels authentic. There are a few fluff scenes of filler here and there, but most of the dialogue aids in the progression of the characters story lines. Jack spouts off some rather corny, pseudo intellectual lessons about life, but still manages a couple of memorable one liners which feel true to the character, unlike the other stuff. The fight choreography was surprisingly impressive. Most of the sequences look good and it’s nice to see another film from the days where it wasn’t always about shooting unrelenting, visceral on-screen violence just having fun. The special effects are pretty hokey but everything was pretty lame in 1986, so it goes with the time period and themes of the film (haha). The use of smoke and lasers were the standout visuals. There’s an action sequence towards the end of the film, involving the “Thunder” character that got a little messy. It mostly took place off-screen but it was done practically and looked decent.

The two aspects that impressed me the most in Big Trouble In Little China, were the nice mix of 80’s Rock and Synth based music, along with the film’s wonderful set design. There’s a reason many current film’s are being scored primarily using synth, because it’s effective and it holds nostalgic appeal. Nicolas Winding Refn and Adam Wingard are just a couple of directors, with synth orientated scores in their films. In the beginning, Carpenter gave life to it all with “Halloween” and “The Thing”, so it should come as no surprise that he also scored this film and that’s a huge part of the reason it sounds great. The set design is awesome too. Although the sequencing and change in location for certain plot revelations often feels re-hashed, the minor things in each frame are important and attention to detail was a highlight. We get a lot of ancient statues and artifacts from Chinese history, along with a very oriental color scheme in most of the internal locations. Tunnel systems are covered with dredge and cobwebs and carefully lit, the underwater cave with raw skeletons floating in it was a nice addition as well.

Big Trouble In China’s lighthearted nature lends itself to a few average performances, including Kim Cattrall’s. Some of the secondary cast aren’t the most believable in their roles either, projecting jubilant attitudes and given the situation it’s a bit of a stretch. There’s a hypnosis scene aimed to be the catalyst in Lo Pan sealing the deal with his potential bride. I found it rather unintentionally comedic, especially when the Thunder character (I think it was), begins to levitate both Miao and Gracie onto a bar of some sort. Credibility wears a little thin when the Chinese gang are able to kidnap Miao in the beginning of the film. I doubt you’d get into the airport with a weapon on you, luckily it’s 1986 though so I suppose security wasn’t as tight. I found a lot of the finer points involving the centuries old curse quite confusing. The feud between the two gangs in the opening act didn’t seem to have much bearing on anything else. I understood that Lo Pan was able to use magics to make himself seem present, but the curse didn’t allow him to actually take corporal form until the ceremony was complete. I must have missed the details on why Lo Pan was cursed and who actually cursed him. It might been revealed in the scene where Lo Pan is in his current old and frail form.

For what was supposed to be primarily an Action/Adventure film, it failed to deliver anything fresh. Now I don’t mean fresh in the sense of showing us something we haven’t seen before, more that once you’ve seen the group navigating one of these subterranean caves or oriental shrines, you’ve seen them all. After about an hour things start to feel re-cycled and stale, characters are just going through the motions and only stopping to rework their approach in gaining access to the “wedding”, when something or someone impedes them. I would’ve liked to see a bit more action, some more gun play and a few over the top escapism sequences. Something along the lines of “Kill Bill” meets “Teenage Mutant Ninja Turtles”. Instead, this one ends up feeling like a one trick pony.

Big Trouble In Little China isn’t one of Carpenters best films, but it’s still a fun and unique one all the same. Jack Burton is an entertaining character, the Rock and Synth soundtrack is brilliant and all the set design is of a high quality too. There’s a bunch of fun sequences and cool one liners, unfortunately it echoes a constant freeze and re-group scenario that quickly becomes a burden to the pacing of the film. Some more diversity in unfolding sequences, an increase in action and clearer story revelations would have significantly raised the bar in warranting multiple viewings.