Firstly I’d just like to say thank-you to Writer and Director, Jason Witter for sending me an online screener of his found footage Horror film, “Pizza Girl Massacre”. I stumbled across the film on Imdb, and saw the trailer had an Exploitation feel about it which I like. I contacted Jason immediately and had my hands on a screener by the end of the day. Pizza Girl Massacre centers on a group of young adults from a community theatre, who are preparing for their production of Shakespeare’s “Midsummer Night’s Dream”. Majority of the play takes place in an enchanted forest, so the group of thespians led by Director Jason (played by Jason Ritter himself), decide to go to a cabin in the woods to rehearse. One phone call for pizza later, and the entire cast are fighting for their lives against one truly disturbing and psychotic pizza delivery girl. The film stars David Valdez, Debi Kierst, Rhiannon Frazier, Scott Bryan, George Bach and Amy Bourque as “The Pizza Girl”. I’m not sure about the budget for this one, but at a guess I’d say between $5,000- $20,000, but don’t quote me on that. Initially the film’s title is what appealed to me, and I was hoping for a ridiculous and gory psychological slasher. Is that what I ended up with? Read ahead and find out. 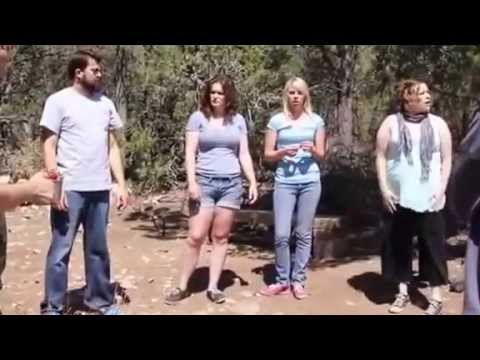 Pizza Girl opens with a clever introduction about the community group, and the project they are undertaking. All the details about the footage are revealed immediately, much like a fairy tale or that Shakespearean style. The dialogue audio was a little bit inconsistent depending on location changes, but for a micro-budget film it was alright. Several characters scream multiple times throughout the film though, and that caused some spikes and peaking in volume. A lot of the comedy fell flat, and the purposely overly dramatic delivery just ended up annoying. However, those of you who’ve been involved with drama productions might be able to relate to the particular taste better than I. The one shining light for me was Jason’s character, and his delivery when it came to the gags. He spends most of the first half of the film barking orders at everyone, and freely doing the rounds hitting on the entire female cast at one point or another (haha). The fact that he looks so much older adds to the execution of those weird quips. I didn’t care for any of the characters in this film, and for the most part not even enough to remember who they were. Basically all you need to know is their snot-nosed brats that think the world owes them something. 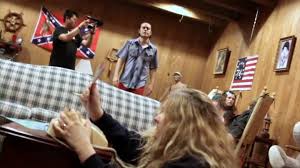 The type of formulaic writing I’m speaking of works in a Horror film. Sure, we see it all the time but those are the people we like to see get what’s coming to them. The most interesting character was the mysterious pizza girl herself. Amy plays it as basically a mute, minus a handful of words. With this painfully plain and creepy look on her face, she hits the mark for the entire duration. I was disappointed that a bigger chunk of the film didn’t delve more into her state of mind, instead it goes more the way of a Tobe Hooper film (and one in particular). Barring a photo frame on the wall, there were no real clues eluding to what bought about this situation. The last element to cover is probably the most notable, and that’s the blood and gore/ practical effects. This reviewer was hoping for a lot more on the action front however, what I did get too see looked the goods. All the blood was practical, including the odd spray towards the camera. There were a few nice prosthetic pieces made up, and one ambitious but fun, free-handed sawing scene (haha). I commend Jason and his team on paying particular attention to the consistency of the blood and it’s color.

The decision to shoot Pizza Girl Massacre from a first person point of view, along with a found footage reveal didn’t really work for mine. I doubt that any one of these people would have been recording a rehearsal. They have each other to supply the feedback, although some may say plays are taken very seriously. However, I think this could have worked a lot better if it was conventionally shot. A lot of the footage we see is supposedly damaged. Obviously someone has found the busted up camera and this is what we’re seeing. Unfortunately, with that comes irregularities with the camera’s focus, along with some terribly abrupt cutting. At several points throughout the film there’s rapid, and static editing issues which supposed to depict the damaged footage, I get that, I do. However, it’s not a good look when your already working with such a small budget. Your best to keep things steady and simple. There was a missed opportunity when it came to the score which was rather dull. I was hoping for some heavy synth which was a common theme in this style of film, which feels very much like a 70’s/80’s shot on video flick. I can’t be too tough on the quality of performances from these actors and actresses, after all most of them have little to no experience and unfortunately that showed. General conversations between characters weren’t bad, but during some of the angry moments in the rehearsal, it all felt very scripted and amateurish. The writing is the kicker here. It’s quite weak in places, specifically in most of the characters reactions and their decision-making. It lacks a bit of maturity as well with its constant profanity, most of which didn’t seem warranted. Rhiannon and Jason appeared able to handle their parts a bit better than everybody else, so kudos. 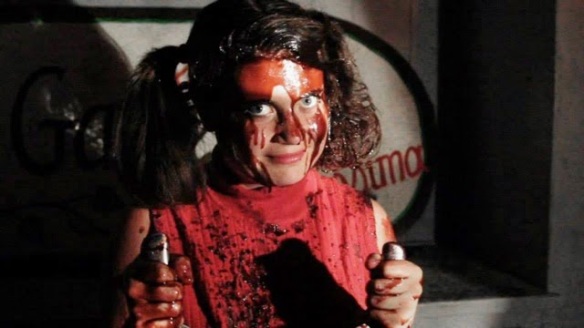 Furthermore, once certain revelations are made known to us, the credibility relies on two or three characters that turn out to be key to the whole situation. Sadly they end up playing their respective parts like carbon copies of similar stereotypes from other films in the genre, just not as well. The story-time aspect in the beginning carries onto labeling characters names, and every area of the production set as well as the cabin tour, that got tedious after a while. It’s not long into the film and the cast arrive at the cabin, I didn’t catch how they got wind of the place, or if they knew the owner, but any who. Upon arrival, a mysterious man carrying a pitchfork and wearing a wheat bag over his head starts to walk towards their cars. Weird? yes a little, but not overly scary or suspenseful given it’s like 2pm in the afternoon (haha). Here’s me thinking it would take your brain a few seconds to work out what you were actually seeing, but apparently not because without warning several members of the group begin frantically screaming and freaking out before they realize it’s just a harmless, somewhat simple man. In fact, it’s the owner of the cabin’s son. Once the proverbial shit hits the fan you’d think that would be the time to try to obtain a weapon, but alas no one ever does. I can take a weak moment or two throughout a film in this genre, with this title, but c’mon (haha). You don’t want to insult your viewers intelligence to that extent. They expect a fight of some sort and not a single one of these try-hards even has a crack, of course making them even less likable. A character that shall remain unnamed, tries to dial for help at one point but is in plain view of the rest of the group and clearly not dialing. Yet even with eyes on her no one seems to notice the numbers aren’t rotating (ah durr..). On another occasion a couple of characters are hiding behind a couch trying to concoct a plan. They are about 6 foot from the Pizza girl and don’t appear to be feeling the heat, Seriously like you wouldn’t be skewered in 4 seconds? I know they were probably trying to build some suspense in that part, but it was just “Scary Movie” silly. I could go on with these gripes but I won’t. 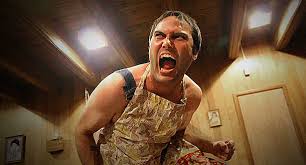 Jason Witters “Pizza Girl Massacre”, is an ambitious low-budget undertaking that was always going to have its work cut out for it. I feel like this was a missed opportunity that should have been so much crazier and memorable than it is. Some of the characters quirks and a few of the comedic gags worked, along with Jason, Rhiannon and Amy giving the better performances. The best thing on display here is quite clearly, the resourceful practical effects and prosthetic application during those action sequences. Sadly they weren’t dominant like they should have been for a film in this genre, with this kick ass title. The style in which it’s shot, the inconsistent audio and the flavorless cast make it difficult to gauge a potential higher rating. The first half plods along with basically no body count to speak of, all the while lacking the character development too. It picks up momentum a bit towards the final act but not enough to really save face. It can’t be denied that Pizza Girl Massacre feels like two completely different films, neither of which can keep your attention. I commend Jason’s effort though and somebody else might see something I couldn’t. This is not an easy business and I’m sure he’s learnt a lot and will put that to good use on his next project which I hope to watch, Sorry mate!