Firstly, I just want to say thanks to writer and director Roger Sampson, from “Force Of Nature” films for allowing me access to two of the short films from his upcoming horror anthology “The Forces Of Horror”. The first is a 13 minute short called “Revelations”. It’s about Mary and Hank (played by Sheri Davis and Lance Eakright), and their young daughter Lili (Gracie Whitton). Mary appears to have the perfect family and a successful career, but beneath the surface she harbors a secret or does she?. The film is ultimately about what we are capable of in the most extreme of circumstances. For the most part I chase up these kinds of films, but this time I was lucky enough to be contacted by Roger instead.

I love the way this one opened up. Accompanied by an old style folk song played on piano, the camera pans smoothly down a street, before landing outside Mary’s lovely suburban home. Once the film movies inside the house, we get some really smart shot choices and swift editing. Starting from various rooms in the house, to a family photo of Mary, Hank and their daughter, and then cutting to the kitchen table as Mary answers a phone call from work. In this scene, we gain a little insight into her seemingly high-profile job, and the chain of command that goes with it. The second half of this short uses it’s sound effects wisely and it aids in creating a certain amount of tension. The best part about Revelations though, is the combination of some sweet practical effects, albeit a very short glimpse of them as well as the direction the story ends up going. The final twist was very eerie, and at first I thought I had it figured out but it definitely comes full circle, most people aren’t going to see what’s coming.

The only technical aspect that irked me was the inconsistency in the audio levels. Some of the dialogue was very quiet, and that may have been due to the daughter mumbling a few of her lines. Excluding the credits, this only runs for just over ten minutes so it’s difficult to find anything negative to say. The one thing I couldn’t work out was whether Sheri Davis’s performance was a little fake on purpose or not. During the phone conversation Mary had, it seemed to imply she was a rather fake person (or at least at work), and maybe that was supposed to be purposely projected by her character, so I’m not going to call that bad acting (haha). 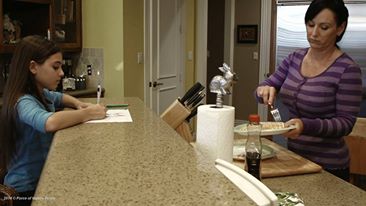 Revelations is yet another hidden gem for the world of independent films. I’m very thankful for Roger’s inquiry about reviewing this, because otherwise I probably would have never found out about it. I look forward to the final product once the rest of the anthology is put together. He shows a clear understanding of the technical aspects and just needs to spend a little extra time ironing those specifics out. The writing is of a high standard, it looks and sounds great, and I was entertained all the way through to the twist that gave it a nice finishing touch. Well done!

“The Jones” is the second of Roger’s films that I had the chance to review. It stars the exact same cast as “Revelations” and also adds both Robert Johnson and April Hartman. The Jones is a 9 minute horror short about a zombie family that must deal with their daughter “turning” human. The film takes place in the same location as the aforementioned, and in a society where zombies are the norm, and regular law doesn’t apply when it comes to feeding. 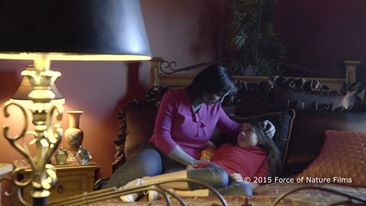 The Jones had a somewhat unique and interesting premise, but it could have benefited from taking a more comedic approach (just a thought). I enjoyed the way this one opened up with Mrs Jones cutting a plate of brains for the family’s dinner (haha). The music theme was very 80’s inspired, and reminded me of a “Leave It To Beaver” style score. Once again, the camera work and shot choices are both solid. I noticed that most of the scenes were quite dark though, but I think that may have been intentional. All the blinds in the house were closed, and the parents didn’t want their daughter opening the front door. Maybe the vampire and sunlight don’t mix approach, was being taken but I’m not sure.

I was disappointed that the “Jones” title wasn’t a connection between Revelations and this one. I remembered Mary in Revelations, making reference to a Mr Jones being one of the most crucial of her clients. I thought that might have led somewhere with this, but alas. For me, the key issue again here was the audio. It seemed a lot quieter than the previous short but when the screams were heard, it started to peak out. I understand if the house has a certain echo or bounce, it can be much more difficult to edit your levels correctly. The slow motion shots in the climax of the film didn’t seem to serve a purpose either. I thought the core plot was supposed to be about a young girl turning human, which would imply that in the beginning she isn’t human. If that was the case, she should have had at least some zombie makeup and had it slowly breakdown across the running time until as they said, she “turned” human. I was a little confused by that whole plot point, not to mention the zombie makeup seemed much more ghostly than anything zombie related, but that could be due to the budget I don’t know. More time probably could have been spent in that department as it’s crucial to a story like this.

Revelations hit the nail on the head and I thought it may be tough going trying to come up with something as good as that, I was right. The Jones is competently made and looks pretty good, but it’s difficult selling a story in a genre like this one, especially in such a short space of time. The cast was solid and the dialogue’s relatively engaging but this one probably won’t leave that lasting effect on audiences.