First up, I just want to say thanks to Producer Zach Green, for allowing me access to an online screener of the Drama/Thriller, short film “Worm” directed by Richard Powell, starring Robert Nolan. I can’t remember how I initially got in touch with Zach (or whether he did with me), but social media is a great outlet for filmmakers and producers to share their work, and for a film buff like me, need I say more. Worm is a 20 minute look at a day in the life of Geoffrey Dodd, a seemingly normal high school teacher whose struggling to deal with life. He has a hatred for everything and everyone, except of course for his lovely student Lillian (Samantha Nemeth). Shorts are a really great way for newcomers to get involved in the industry. Richard has made a couple of others that I’ll hopefully get the chance to watch and review. Going in, I didn’t know much about this one, and I spent the first five or six minutes trying to remember where or what I knew, lead actor Robert Nolan from. A lot of the short films I’ve reviewed fall into the horror genre, probably because they are often the cheapest to shoot, this one made for a nice change of pace. 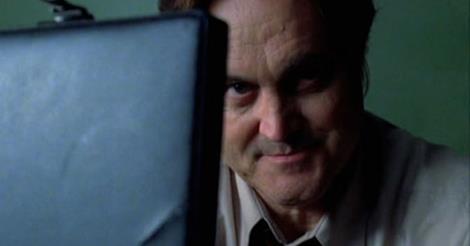 Let’s begin with some of the technical aspects. The camera work and editing between scenes were both very well executed. As we witness Dodd’s slow descent into madness, the camera techniques and shot choices become more intense. That comes about through some of the editing of Nolan’s eyes, as well as through a select few sound effects that really emphasize the level of contempt Geoffrey has for everything. There isn’t really a theme when it comes to the music, but I did like the song “Stars and Satellites” which plays during the end credits, that was a nice piece of music. It’s Richards quality of writing that makes Worm the compelling, psychological deconstruction of the human psyche that it is. It’s written with a certain amount of superiority, in the sense that Geoffrey is an incredibly self-absorbed man. However, it manages to convey a sense of realism in the way our narcissistic teacher sees the world. He says things in certain situations that we are often all thinking, but it’s that filter, that pesky thing called diplomacy that holds us back from divulging our true feelings. Who knows why Geoffrey’s that way, or what events may have led him to this point in his life. Even though questions aren’t really being asked of us as passengers, it doesn’t make it any less interesting.

I want to quickly touch on actor Robert Nolan. I eventually figured out that he was one of the two leads in a film I reviewed a while back called “Canswer”. I wasn’t a huge fan of the film, and I thought some of his acting within it was inconsistent. I’m going to have to watch a few more of his films before I can make a definitive decision about him, but I was truly surprised and impressed with his role here. Not everyone could have pulled this off. He has a great intonation for voice over or narration whichever you prefer, and that’s three-quarters of what his character projects here. I saw him in another film I reviewed called “Berkshire County”, it was only a small role but he did his bit there too. It’s his two films from 2013, “Antisocial” and “Silent Retreat” that I’m still yet to watch, once I have I’ll form an opinion on him as an actor.

I think the audio level was pretty good but a little inconsistent. I would have liked it if it was a little louder in the mix, because some of the sound effects drown it out on a few occasions. I think Worm would have benefited somewhat from the inclusion of a scene during Geoffrey’s home life. All we get as insight to his mindset, is throughout his working day but maybe that’s the point, maybe he doesn’t have anything else but if that’s the case some type of internal dissection of that would have sufficed. That’s me being ultra picky though (haha), given this is a short it can be difficult to include more information regarding motive or a thought process when you’re trying to keep the running time down. Just a warning for viewers that aren’t open to a look at things from a “negative” perspective (for lack of a better word), you might be left feeling a little depressed when this one is over, but it reigns true and I like that.

Much to my surprise, Worm was the definition of a hidden gem. It would be a travesty if people don’t see this brilliant short, if given the chance. The technical aspects are nearly all perfect and the writing is of the highest quality. Nolan gives a great performance, with shades of Michael Douglas’s character, William Foster (from Falling Down). Geoffrey’s theories on students of today and his struggles with normalcy, parallel the indie/black comedy from 2011 “God Bless America”. With all that said, bar a couple of very minor things, I don’t think you can go wrong with this one. For everyone that was involved with this project I say great work, and I can’t wait to see more from the team at Fatal Pictures.