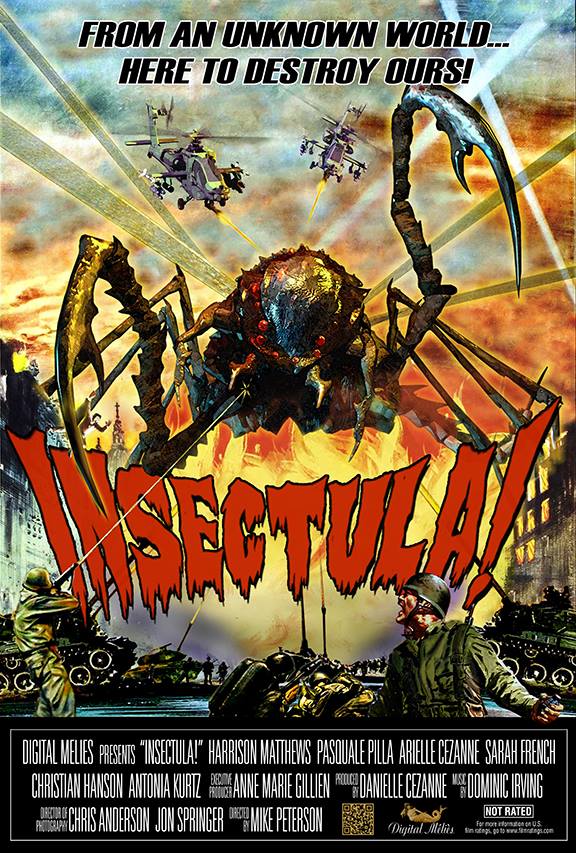 Firstly, I just want to say thanks to writer and director Michael Peterson, for allowing me access to a screener of his B movie, creature feature “Insectula!”. I inquired about the film today and within minutes he sent a link, and I’m very appreciative of that. The quick response and willingness to share his hard work, is what gives me the opportunity to watch these independent films. Now, all of you who know me, know I like a good creature feature as much as the next guy, however it’s not that often we get them (the good ones I mean). Most of the time we get the combination of terrible CG, wooden acting and a complete lack of action. I’ve watched everything from old B movies like “Tarantula” and “Attack Of The 50ft Woman”, through to the more modern “Dragon Wasps” and “Spiders”, and rarely do they get it right, yet I continue to watch in the hope that one day that will change, Was that day today??. Insectula is a sci-fi/ creature feature, about a giant alien-mosquito insect that’s drawn to Planet Earth because of all its CO2 pollution. Del (played by Pasquale Pilla), is a government agent seeking revenge, after having lost a loved one at the hands (or stingers, or tentacles… whatever they are haha) of the creature. On the other hand, Dr Kempler (played by Harrison Matthews), and his lovely assistant, Brittany Sax (the gorgeous Arielle Cezanne), are hoping that they can help the creature cleanse planet earth and undo what the human race has done. The film also stars, both the beautiful Sarah French and Yasmin Moon, along with Joel Thingvall and John Edel.

Before I start, if you are someone looking for originality your probably looking in the wrong genre. The creature feature spawned back in the days of Roger Corman’s early films, and has since expanded to present day, where we have an entire TV channel (SyFy), dedicated to low-budget sci-fi and creature related films. I think if you’re a fan of the genre its a great thing, those of you who aren’t don’t say I didn’t warn you (haha). Anyways, onto the review. Starting with the amazingly cheesy title “Insectula!”, that should give you some idea as to what type of film you’re in for. I love the title and the homage it pays to all of the films before it. The funny disclaimer segment in the beginning, along with the intro credits sequence, make for a great way to kick-start this ride. The quality of the technical aspects in this one surprised me. Given the low-budget nature and experience Peterson brings to the table, I was impressed. I believe this is his first full length feature, and he shows a good grasp of each element. Most of the audio is very flat sounding, but the majority of it’s very clear. In the beginning, when characters were separated by a reasonable distance, the two channels varied a bit in volume. The scenes in the woods and at Kempler’s lab, started to level out and it only improved as things progressed. I love the camera work too. Michael made really smart shot choices, opting for a simple style but ultimately resulting in an effective look. The 50’s style score sounded awesome, whoever was responsible for the sequencing within that, did a great job.

I don’t think that a lot of the set design or locations were dressed with a consistent amount of detail. Considering this is set in modern times, things were a mish mash of old school technology, crossed with modern electronics like computers/phones etc. To a certain degree it works, because if you’re going to pay homage to those old films, you need that touch of nostalgia, problem is that I found it inconsistent. The one setup I did like was the creatures nest. A lot of detail went into that, it had a certain atmosphere. It wasn’t just your typical cobwebs and cocoons etc, the color scheme was awesome and the practical effects in that part looked solid too. Speaking of effects, for three-quarters of this film everything looked really good. The action didn’t quite reach the heights I was hoping for, but we get some nice practical bloody limbs and even a head. The amount of blood was passable, but you can always use more (haha). CG was used for a couple of the more elaborate kills, but they still looked alright. The very opening scene, which is set on another planet looked nice, without looking overly like computer graphics, it’s a shame that wasn’t the case during the final battle. Michael was also in charge of visual effects for the film too, so he’s proving to be quite the auteur. He saves face somewhat, with one of the best looking creatures in any film with this kind of budget. Maybe it’s that I’m so use to really bad CG from the SyFy channel, I don’t know what it is, but I know that he’s done a great job of blending this creature into scenes involving the cast.

I’ve left a small paragraph here to talk about the cast. Actually I really just want to talk about the ladies in Insectula, because the men are forgettable (haha). Wow, what a group of absolutely stunning girls, whom Michael managed to cast here. Sarah French only has a few scenes, playing a street hooker, but she thoroughly entertains in them (pardon the pun). I have several other films she’s done (most of which are currently unwatched), but I can see she brings her down to earth personality to the production. Yasmin Moon, plays herself (haha), actually I couldn’t work out if she was Del’s daughter or niece, but any-who she plays Yasmin (haha). She only has a couple of scenes as well, but makes the most of her time on-screen, and her death was also one of the best ones. Arielle is absolutely gorgeous, and my favorite of the female cast though. Her character Brittany, starts out helping the doctor, but before long she realizes what he’s agenda really is and decides to change her ways. This is the type of girl you drive across states to see, (character or real life version haha I’m not kidding), I’ve finally found the Jessica Alba of the independent film community and I can’t wait to see her in more productions. 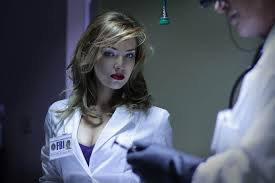 If you don’t believe me, here is proof Arielle in the flesh

Anyone who’s visited adamthemoviegod, knows that I always find plenty of good stuff to say about the film’s I review (well for the most part anyways). Rarely do I find a film that couldn’t have used some editing aesthetically, or some changes in the content of the story. I don’t believe in a perfect film and I never will, this is why I talk about the stuff others don’t, in the hopes of helping filmmakers improve their future projects. This isn’t gospel just my take on things. The only technical issues here, lie with the editing and transitions between scenes, as well as the persistent score and volume of it. The editing is neither here nor there, it’s just a little rushed in a few places. Even though I love the music, it’s prevalent for 90 percent of the film, and unnecessarily incorporated in several scenes where nothing much is happening. I don’t necessarily think the acting was horrible, it was ham-fisted in a few places, but I get that it supposed to be cheesy. Certain reactions supposed to be conveying shock or surprise are just plain bad though. If you want to get behind a character and their motivations, their reactions have to be somewhat believable and nearly everyone involved in a serious scene in this, can’t convey a realistic emotion. That was the hardest part to swallow when watching all these cast members.

Moreover, I didn’t buy Del’s relationship with Hannah (Hannah Hudson), at all. I’m not sure if the two were supposed to be lovers, or friends, or what their deal was. Either way I didn’t buy the chemistry for a second. It could have just been the fact that I really didn’t like Del. Pilla probably played it how it was written, but I found him completely lacking the necessary elements it takes to get an audience’s attention. The fantasy scene while in his drunken haze, stumbling into the water, his stupid and clearly fake mustache, and his constant whimpering all annoyed me and I didn’t like him one bit. Same goes for Kempler, but to a slightly less degree. Harrison played it with a European dialect. Once again, I’m sure it was probably written that way, but it came off as unintentionally funny. The parts that were supposed to be funny fell flat, and his serious moments never felt truly threatening. The content within the story was alright, it was just missing some attention to detail. For the first 80 minutes, the film only consists of a half a dozen characters, there are no extras in sight. I know that’s partially forgivable because of the budget, but even come the final battle, other than a handful of “military” soldiers, the whole city is a ghost town, which I’m sure wouldn’t be the case.

Furthermore, the narrative strays away from several of the main characters for long periods of time and seldom revisits their storyline until close to the end. The script is guilty of familiar tropes, like the mad scientist and his guinea pig. Technically there’s nothing wrong with that its just been done to death. Lastly, I just want to touch on the visual effects again. Like I said, they start out strong, the creature looks pretty great and some of the additional backgrounds even look respectable. Unfortunately, once the film reaches its climax and the action hits home, it all turns on its head. Quality in effects varies, A plane crash looks passable, but the inside of a tank and some city buildings clearly look like they are straight out of a computer program. The gunfire from the leanest looking military you’ve ever seen, looks like miniscule flashes of light, and the tanks and armored vehicles look poor to boot. The final battle starts on a down-stroke and never recovers. If the pacing in the middle of the film wasn’t so slow and contained more action sequences, it might have elevated the entire thing. Creating an epic final battle, even with a size-able sum of money can be difficult at the best of times, so in that sense I still think Michael did a pretty decent job.

Insectula! surprised me in a way. I was lucky enough to stumble across it, and get the chance to watch it so quickly. It’s not a perfect film by any means, but what Michael has created here is a clear homage to the 50’s b film, inspired by the likes of Roger Corman. It’s technically pretty well made, consists of a cast of gorgeous women and one well conceived gigantic bug (haha). Most of the acting leaves a lot to be desired (whether it be intentionally bad or not), It also stumbles at the end in the visual effects department, and some structuring around the sub-plotting needed a bit of work. In the end it is what it is, it’s a fun film. If you like big bugs, gorgeous girls and a visually, competently made indie flick I’d recommend this one, Thanks Michael!