ATTACK OF THE HERBALS

Firstly, I just want to say thanks to David Ryan Keith, director of the low-budget Horror/Comedy film “Attack Of The Herbals”, for giving me access to a newly edited online screener of the film. This film was originally released back in 2011, and I recently purchased the DVD that you see above. However, after a few discussions with David, I found out the issues he had with the movie (personally I think he was being hard on himself), but I suppose some of his hangups were justifiable. I was going to watch my copy of the film regardless. Though this version I’m reviewing has now been re-edited, and extra time has been spent on some of the technical aspects to improve them. This is a review for this new screener, and not the original cut. Attack Of The Herbals is about Jackson (Booth), a young man who has come back home to live with his grandparents. Russell (Steve Worsley), is an old friend of Jackson’s, also living in this small coastal town in Scotland. Russell happens upon a mysterious crate that’s washes up on the shore, and decides to clue Jackson in on it. They find the contents inside make an addictive herbal tea, that turns the inhabitants of their small town into zombies. How can they maintain the high demand for tea, and keep their friends and family safe. The film stars Calum Booth, Richard Currie, Liam Matheson, Lee Hutcheon and Claire McCulloch. 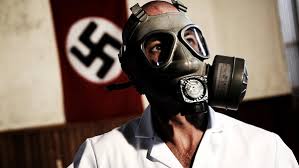 Late last year I reviewed David’s latest film, “The Redwood Massacre” see review * https://adamthemoviegod.com/the-redwood-massacre-review/. I was really impressed with Redwood Massacre’s technical aspects, and of course the script and copious amounts of gore didn’t hurt it either. I thought it was one of the best horror films from last year. Even though I knew this first film of his had a lot smaller budget, just an estimated 15,000 pounds, I was just as eager to check it out. Please ignore the marketing ploy trying to convince you it’s “Shaun Of The Dead” meets “Hot Fuzz”, because other than being a film from the UK, it has next to nothing in common with those. I was chatting to David about the marketing of the film, and they didn’t do him any great favors by making comparisons to  really popular films that both had expensive budgets.

This is such a fun screenplay, and no more ridiculous than any of the other horror/comedy’s being released these days. This reminded a little bit of Chris LaMartina’s film, “Witches Brew”, which was also made on a similar budget. Other than that one, it’s got a hint of “Boy Eats Girl” about it too. The movie opens with some crazy Nazi’s experimenting on a bunch of different people. It’s accompanied by an awesome score, and some really quick cutting on the use of different objects appearing in each frame. The whole film is really quickly edited, and I really enjoyed that, it keeps things moving along at a steady pace. The only part that wasn’t clear, was whether the events in the beginning were taking place during World War 2? I assume they were. A year or date number, on-screen would have solved that, I may have missed it while jotting down notes though.

The audio is crystal clear, and even during shots that frame the actors from a reasonable distance away its still loud. I know a percentage of the movie was re-dubbed, I could tell in certain parts, but for the majority of the running time it’s spot on. The most impressive part about AOTH, is the quality of the camera work, which alone is worth watching it for. It’s rare that I see a director with little to no experience, who really takes the time to get the basics right. David Keith has a freakishly sharp eye that’s going to take him a long way in the film industry. He uses such smooth panning, and I don’t even know whether he used a dolly in this film, if he didn’t you wouldn’t pick it. Wonderful shot choices structured perfectly throughout the film, and its entire color grading being so sharp, is what makes it really work. Might I add, It’s nice to see Scotland not looking so grey and cold (haha).

Some of the intended puns and jokes fall a bit flat, but that’s not to say Attack Of The Herbals doesn’t have it’s moments. The character that projects the most, personality wise is Danny (Hutcheon), he kind of talks like a pirate and he’s got this crazy hair, and a bunch of odd tattoos (haha). The gag that felt the most awkward and effective was the battle between Roadrunner vs the wheelchair lady. It reminded me of something that Edgar Wright (Hot Fuzz) would have done. Some of the acting isn’t great, but most of it’s passable when you take into account the experience levels and budget. Though, certain lines of dialogue are delivered without any conviction. The emotional melodramatic stuff isn’t handled well either, especially by characters like Jenny, who are extremely wooden. Attack Of The Herbals makes up for its shortcomings with some really fun kills, that use practical blood and gore. It’s just a shame David didn’t get to the action a lot faster. Although, after chatting with him about the issues on this film, having such a small crew and budget, I can see now why it didn’t blow the viewer away right from the start.

Most of the technical aspects of the film are incredibly well executed, but it’s not without a few flaws. It’s a lot of the small attention to detail and things that were missed, which is quite a common theme on micro-budget films. The lighting during the scenes in the bar with Jackson and Russell was quite harsh. In a few frames it’s extremely bright, and then it switches to a very shadowy look. Several conversations had a lot of forceful profanity that didn’t gel with the rest of the dialogue. The humor was very inconsistent, and in fact probably could have been done away with. The strongest aspect being the violence and splatter element, just aids in showing us how many of the gags actually felt flat. I thought the entire score on its own was brilliant. But when it’s accompanying those real slapstick moments, it doesn’t fit the tone. A lot of the music is piano based, and feels a lot more emotional than it should. Considering the film doesn’t have any real emotional weight, it’s oddly out place. There was no blood and gore effects in that opening segment with the Nazi’s which was disappointing. It would have definitely benefited the whole movie, by delivering a much bloodier introduction.

I don’t think the fact that the townspeople were zombies was all that clear, if I have to question whether they are, or their just simply possessed, it hasn’t been conveyed in a clear-cut manner. The lack of detail in the makeup, was originally what made me question whether they were possessed. Some of the extras had contacts in and some blood around their mouths, but they didn’t walk, and or run like zombies and their veins weren’t obviously protruding. Once again, that’s probably because of time restrictions and the budget, but it would have been nice to see it done a lot better. The two things weighing down Attack Of The Herbals, are the sluggish pacing and complete lack of action during the first three-quarters of running time. I believe the original cut of the film was about 100 minutes, this one only runs 80 minutes and it still feels generous. Sadly it’s that first hour, with the false character development, lack of back-story, and randomly placed humor that suffocates itself. I just wish we could have seen more of the on-screen violence, and the productive use of all of those cool weapons, but hey that’s micro budget film-making for you.

Attack Of The Herbals isn’t anywhere near as bad as some critics would have you believe. I think in this case, even David is being far to hard on himself. The camera work/color grading and audio are all fantastic. Given the very small budget, those core aspects go a long way to presenting audiences with a professional looking film. The story isn’t really that strong but it doesn’t need to be. It’s only really the inconsistency in humor, and quality of acting that hold this one back. Unfortunately, the first hour is incredibly drawn out, making it difficult for one to maintain their enthusiasm. Attack Of The Herbals saves face though, mostly because of its ambitious intent with blood and gore. Although the blood color lacks consistency, it keeps in theme with the fun and silly nature of this film. David you’re not quite on the ball like a Peter Jackson film (Brain Dead), but you can hold your own.